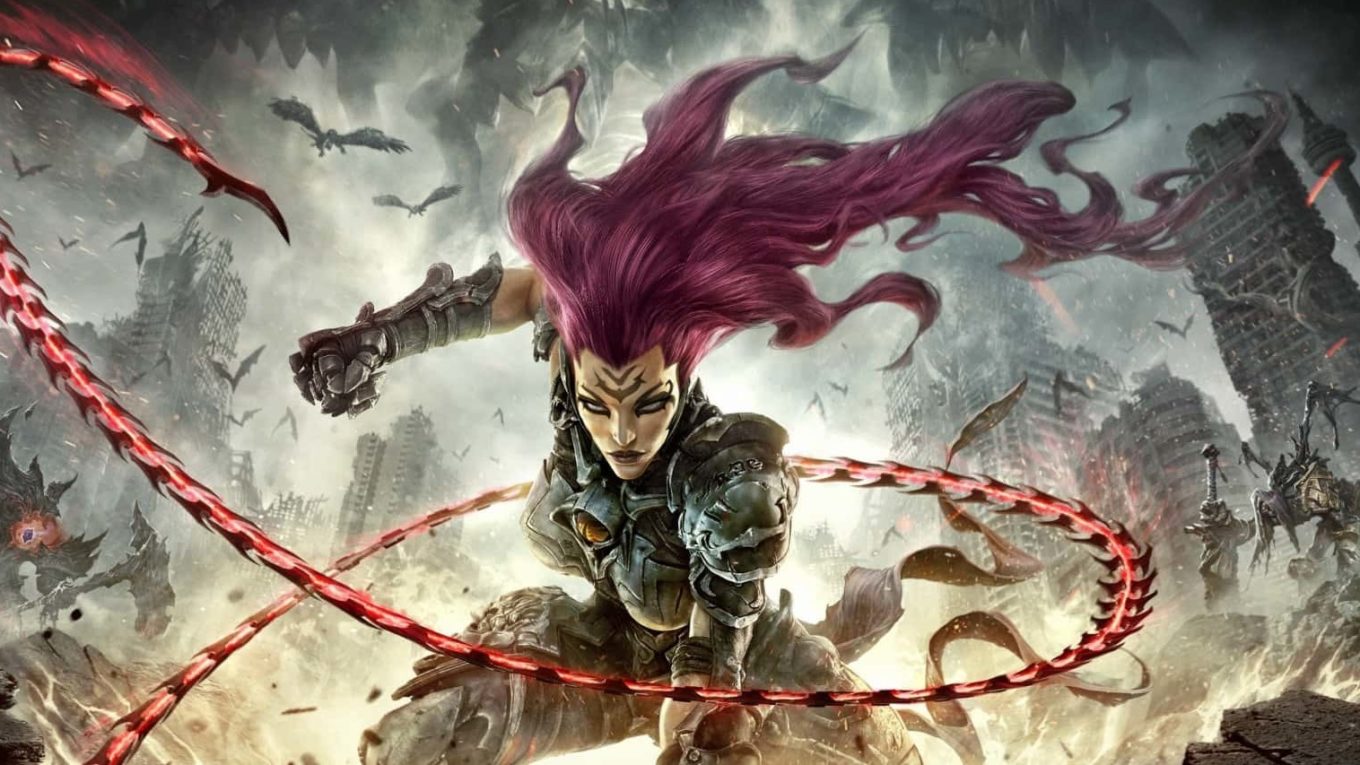 After the appearance of Darksiders 2 in 2012, it became very quiet for a long time around the series around the apocalyptic riders. For a long time nobody dared to hope for a third part, because at the end of the same year THQ, the publisher at that time, declared bankruptcy. The company was crushed and while other brands, such as Metro or Company of Heroes, were sold to other publishers, Darksiders did not find a buyer – until 2014 when Nordic Games took the name THQ, including all remaining brands, under their nails. And so now, six years after the last part, we can finally experience what anger, the sister of war and death, is all about.

After the misguided horseman war is taken prisoner by the fiery council and has to answer for the premature triggering of the apocalypse, he calls his sister anger to him and gives her a tricky order: In the midst of the fierce battles between angels and demons, she is to recapture the personified seven deadly sins that seem to have disappeared in the turmoil of war. Reluctantly, the ill-humoured contemporary makes her way to earth to track down the troublemakers – although it soon turns out that not only her brother, whom she mocked with pleasure before the council, but also herself has become the victim of a conspiracy spanning all empires. What was initially just an order for rage quickly becomes a personal campaign.

The plot of Darksiders 3 takes place more or less simultaneously with that of the first part, which of course also includes overlaps and a certain recognition value in the settings. The men of Gunfire Games, among whom many of the original makers of the Darksiders series cavort, remain true to the previous line and spin the story around biblical myths and other legends in the same direction. Unfortunately, the plot does not really take off until very late and, seen as a whole, has to be in line with its predecessors in this respect. 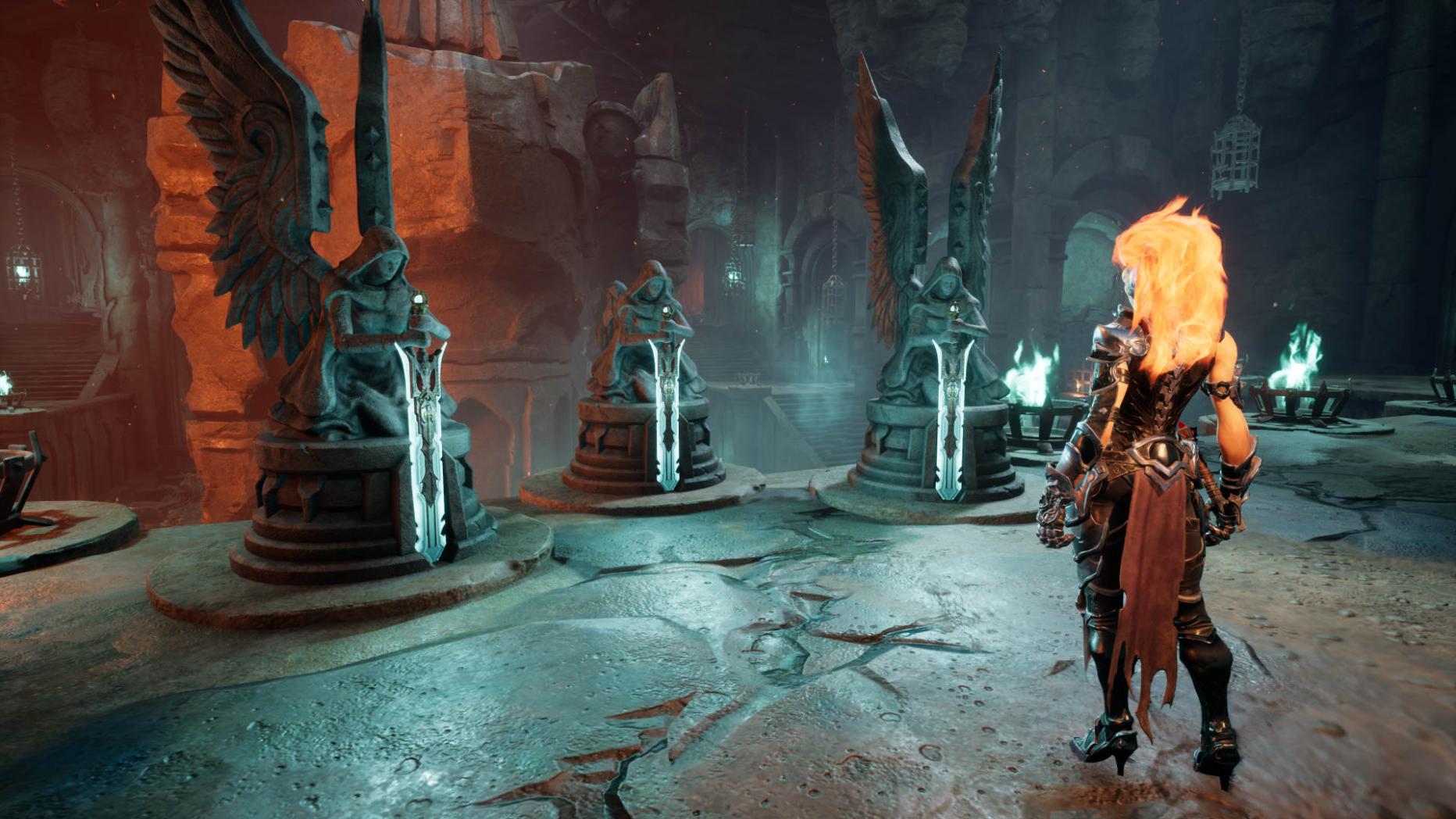 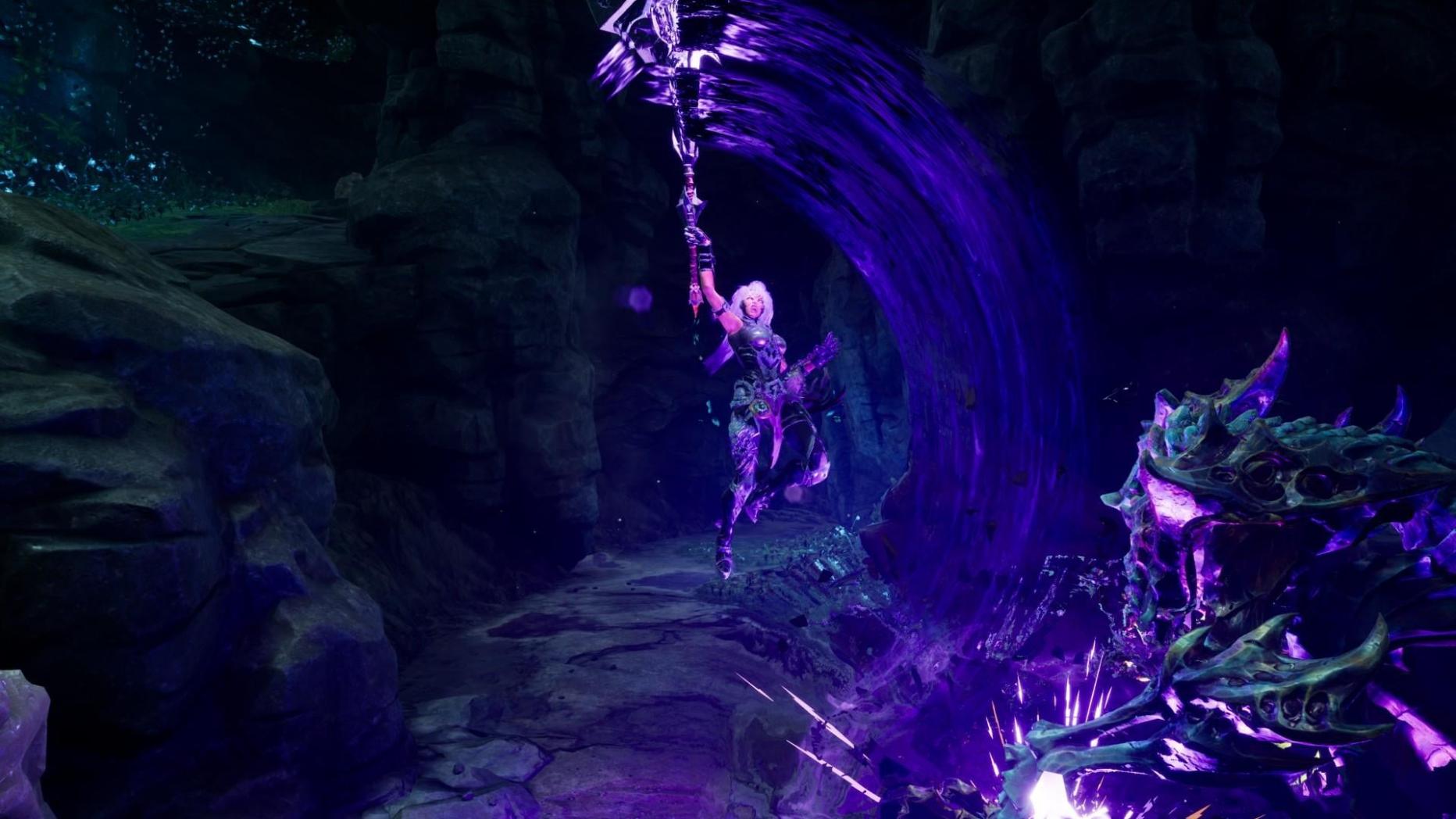 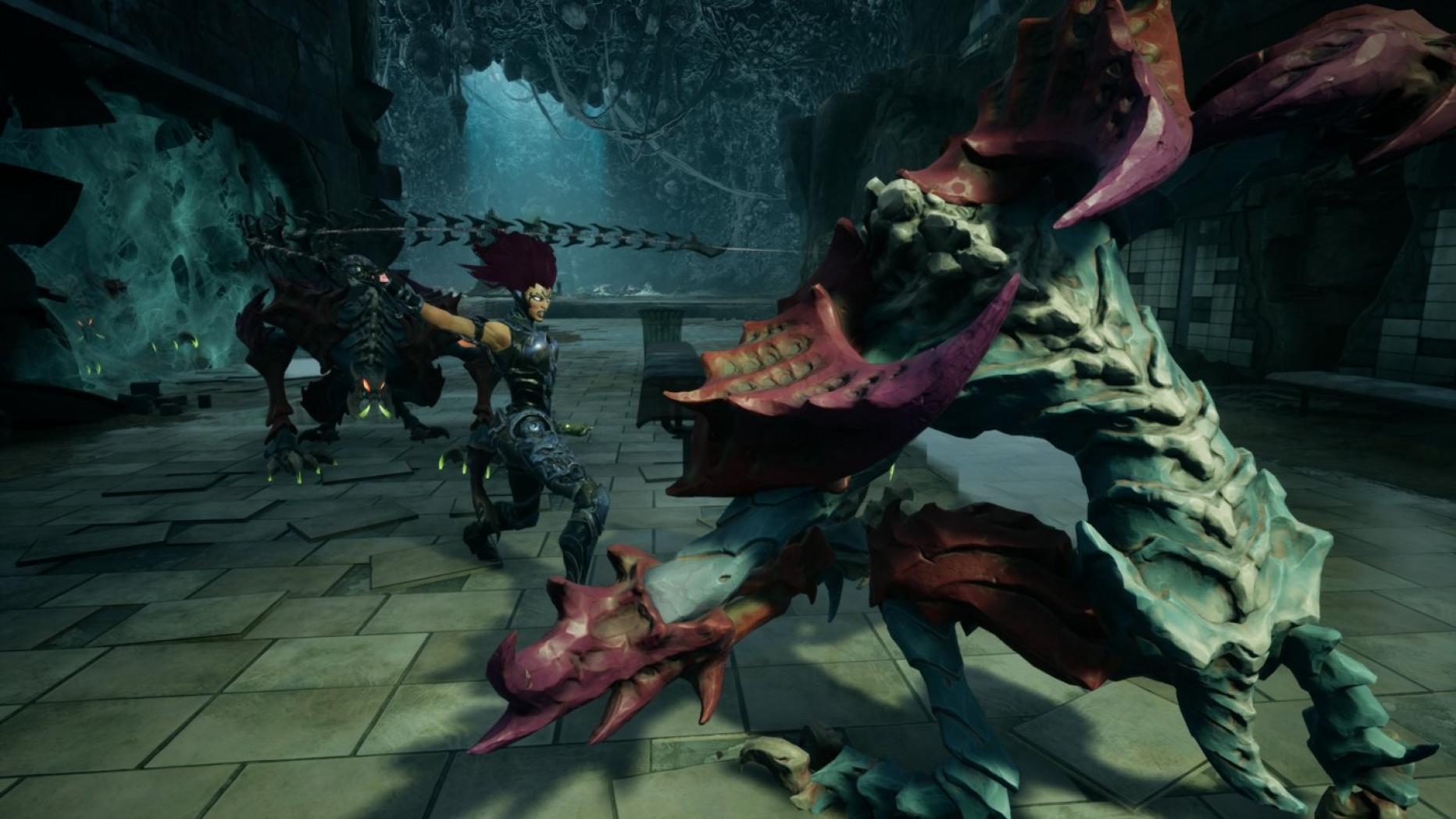 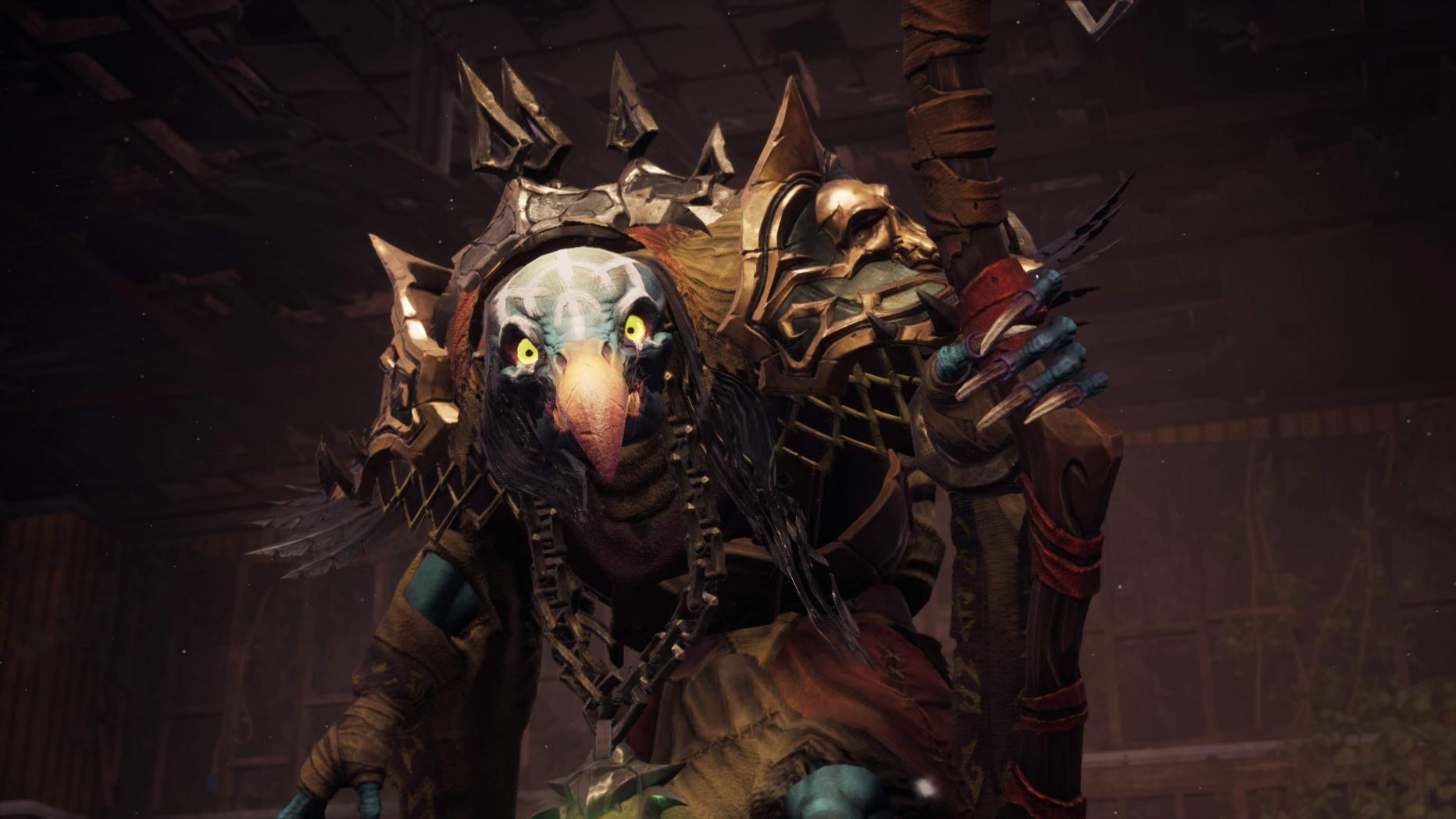 The tradition of letting each new title take a slightly different direction in terms of gameplay will also be continued. While Darksiders was often referred to as the “adult Zelda” as a puzzle-heavy action adventure, Darksiders 2 was more open-world and introduced a Loot system based on Diablo. Here, in the third part, Dark Souls and Bloodbourne have obviously been taken as role models. So this time the focus in combat is as much on dealing damage as on escaping it, because even hits from the smallest opponents at the beginning of the game noticeably decimate the life energy of our protagonist – pure button-hammering won’t get you anywhere. Instead, you have to dodge, whereby a perfectly timed Dodge offers the possibility to launch a particularly heavy attack against the opponent. The adversaries come along quite early with different attacks, which want to be recognized and skilfully bypassed. Despite all the similarities with his mental role model, Darksider’s 3 does without an endurance bar, which makes the fights more action-heavy on the one hand, but also less tactical on the other. Endurance is replaced by a kind of magic bar, which fills up gradually by killing enemies and, as soon as it is completely full, can be unloaded again in a blood frenzy lasting a few seconds. In addition, during the course of the game, rage can gradually acquire various elementary forms between which it can freely choose. These not only give her access to a specific weapon, which may be used in addition to the standard whip, but also affect her maneuverability. For example, it can run through lava in the state of fire or float through the air in the state of lightning. This is what most of the puzzles are about, as in the second part, unfortunately quite thinly sown. Who has wished for a return of the puzzle burden from part one, will probably be disappointed. 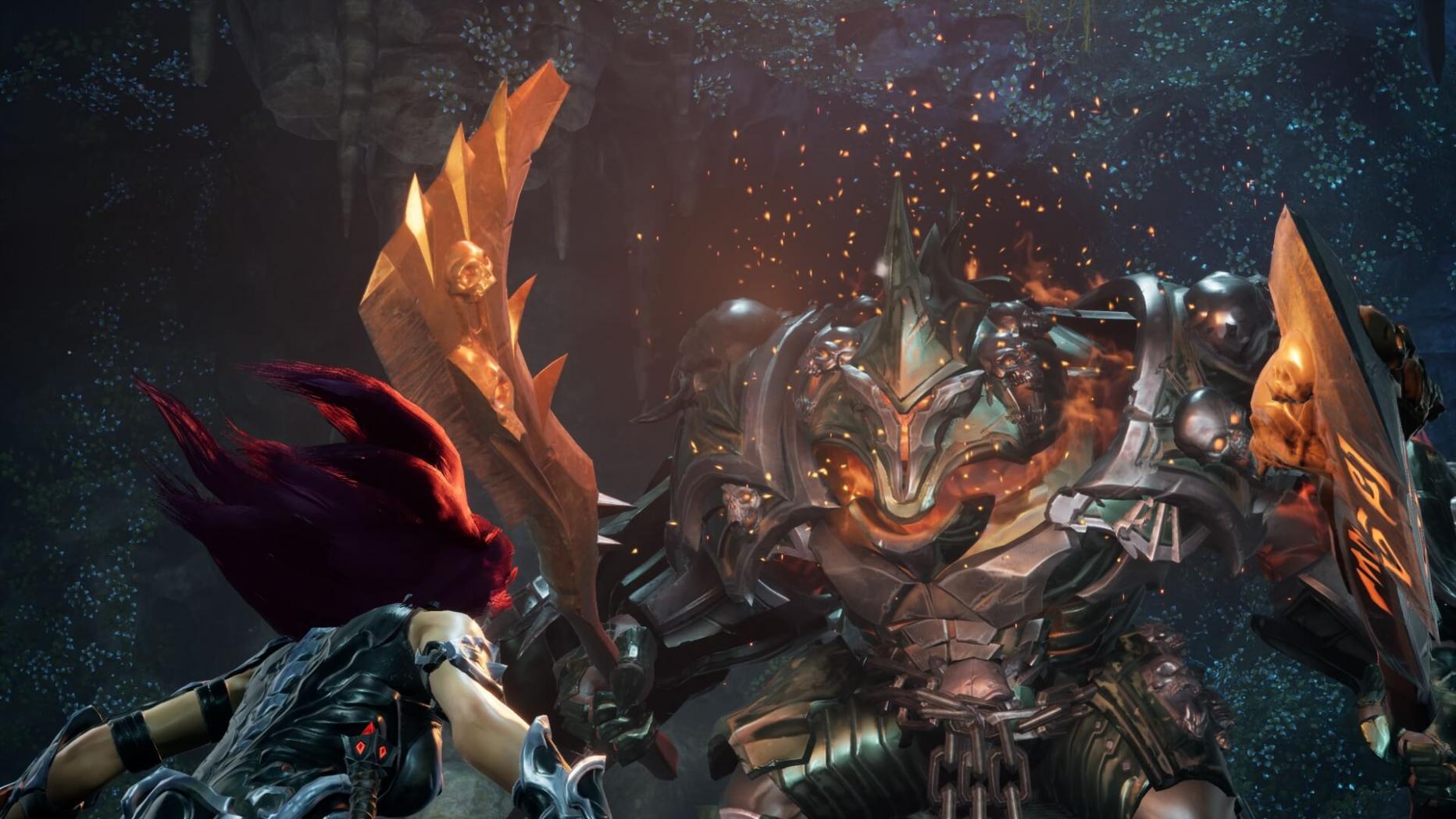 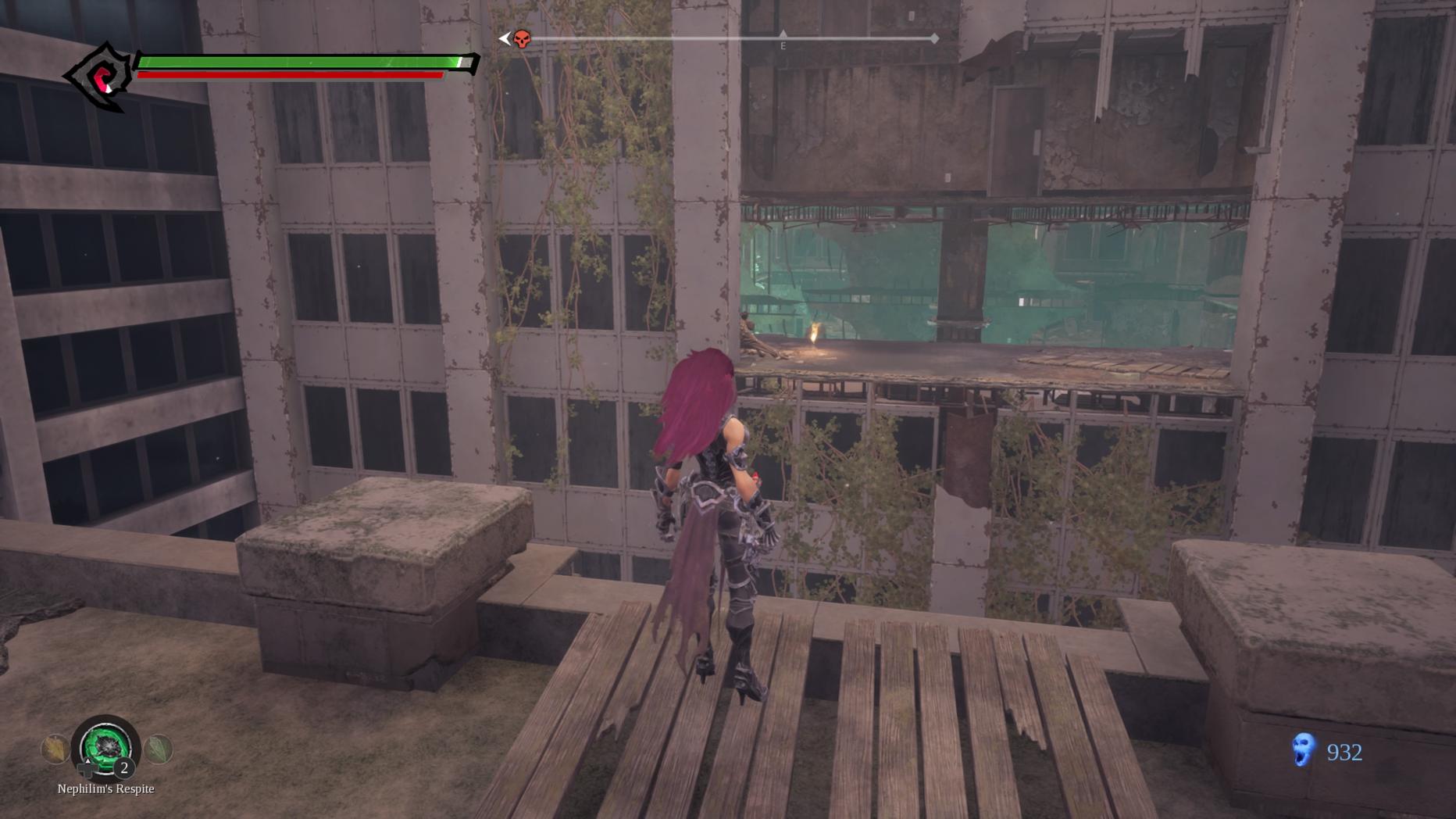 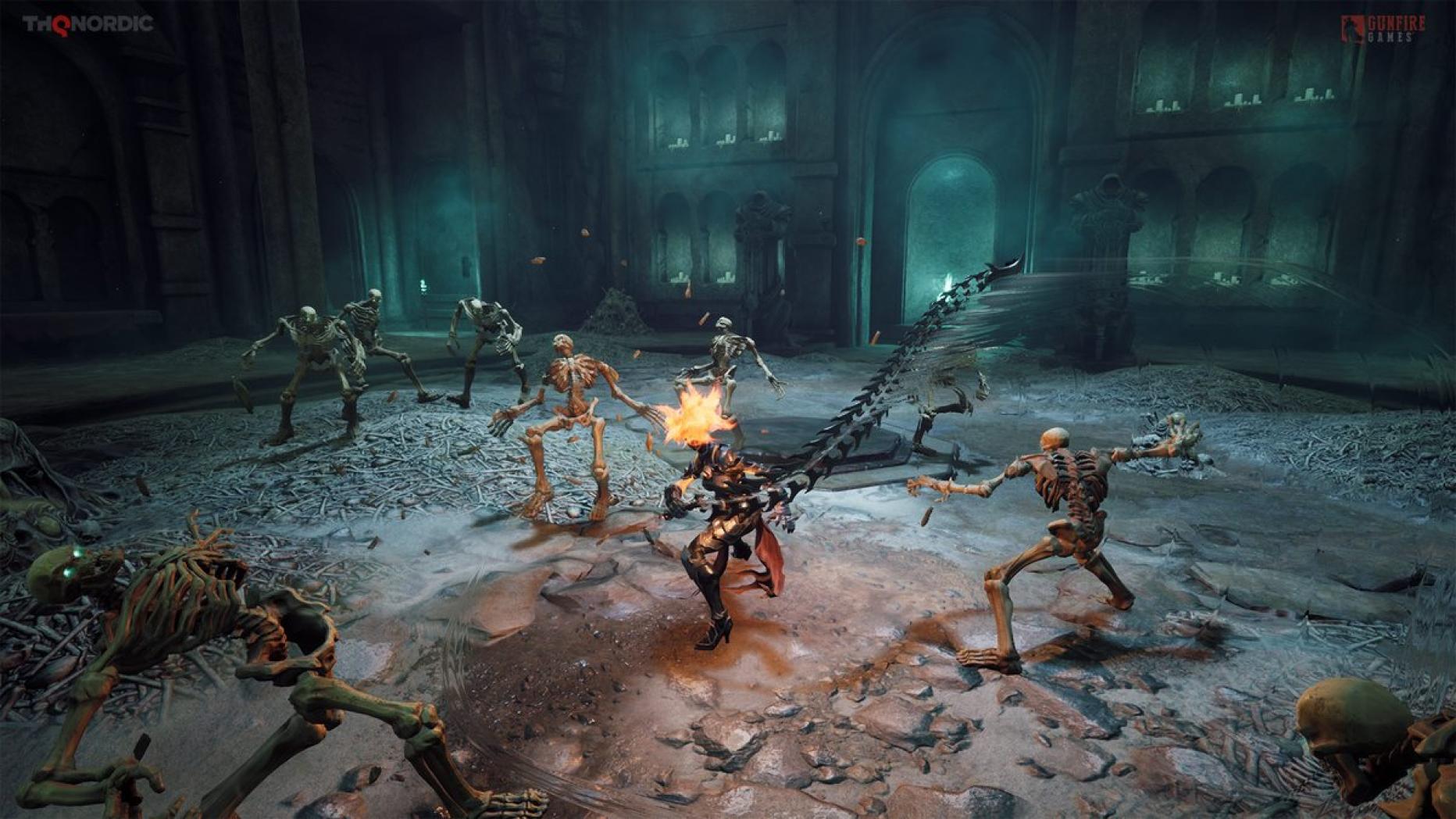 The level structure is also obviously based on the From Software Games, although it never really reaches their quality. In every corner you will find hidden items, difficult to discover side passages that lead to well guarded treasures, or shortcuts to previously wandered through areas. The latter are not as important as their predecessors, because Darksiders 3 also offers a quite comfortable and well-developed fast travel function. Vulgrim, the demon and travelling merchant who also offered his services in his predecessors, is here the counterpart to the campfire in Dark Souls. The souls collected by killing enemies can either be exchanged for various items or you can invest them in level upgrades. The level points bought in this way can then be divided into only three values of rage: Life energy, physical and magical damage. You can also teleport back and forth between Vulgrim’s stalls. Finally, another NPC enables us to improve our weapons in exchange for materials found or purchased from Vulgrim.

Gathered souls remain in place during death, whereas rage is found at the last visited branch of the demonic trader. Respawn all killed monsters with the exception of bosses and isolated intermediate enemies. This mechanism is also known from the role models, but Darksiders 3 is a bit more gracious to its players: Here, abandoned souls remain ready to be collected again even after they die again in another place – provided that you graze all the paths you have taken before, so you don’t have to give up already collected souls as lost for good.

The whole game looks like a light version of Bloodbourne: Levelable stats, but only three of them; a twisty and self-contained game world, which doesn’t reach the complexity of the original by far; opponents, which are consciously and sometimes also common distributed in the levels and only resurrect when the character dies, but only rarely reach the finesse and dangerousness of a dark soul. And also the upgrade system works very similar, but is much less complex.

A really big difference to the big model is the difficulty level that can be set with Darksiders 3. In standard mode, it doesn’t come close to a dark soul, but becomes noticeably harder with increasing progress. Since this is only the second of four difficulty levels, the real lover of pain should not be too deterred. Another positive aspect is that even in Darksiders 3 you can suddenly come across a hammer-hard mini-boss somewhere in a side corridor, which even makes the boss of the zone pale. 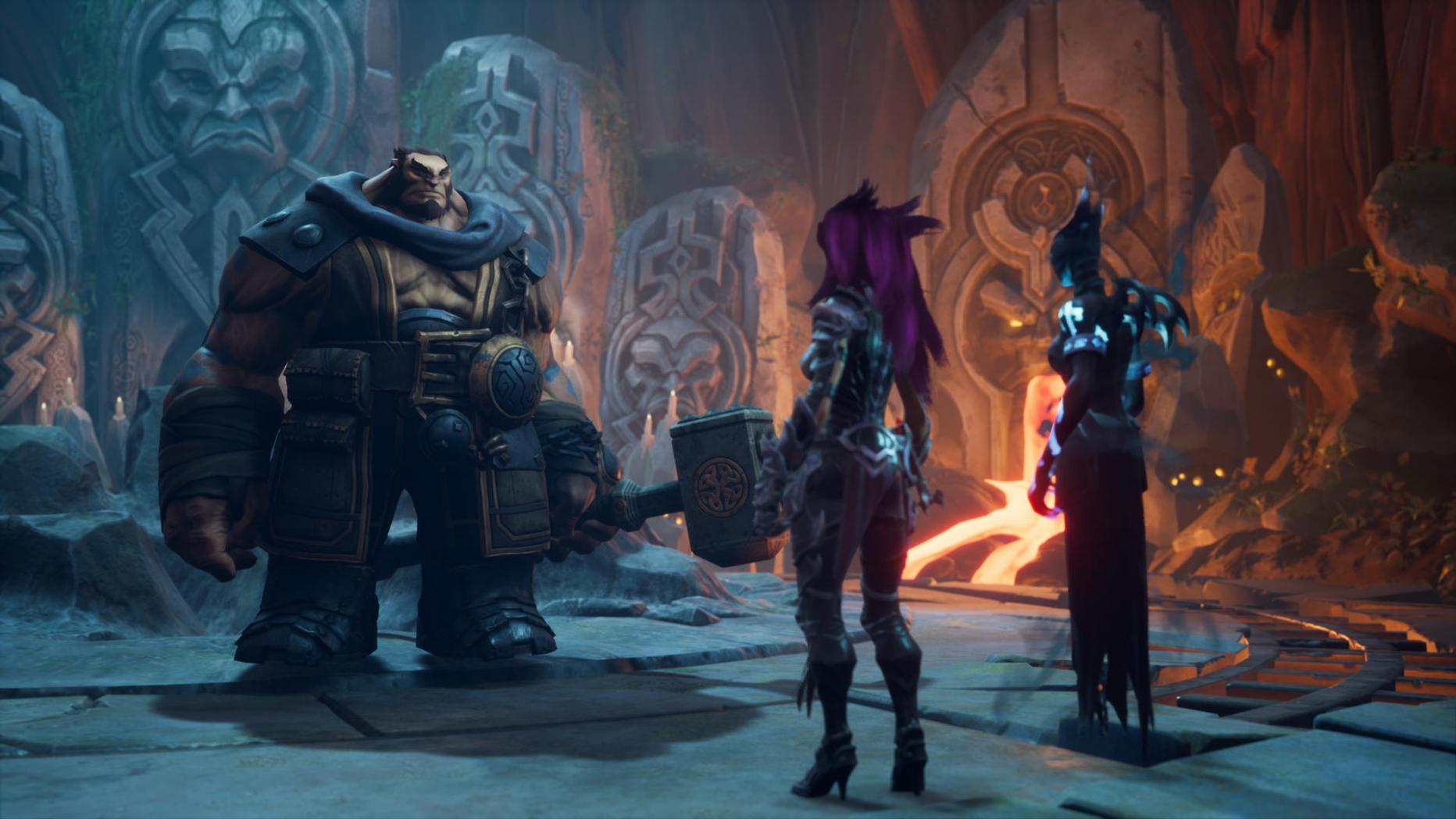 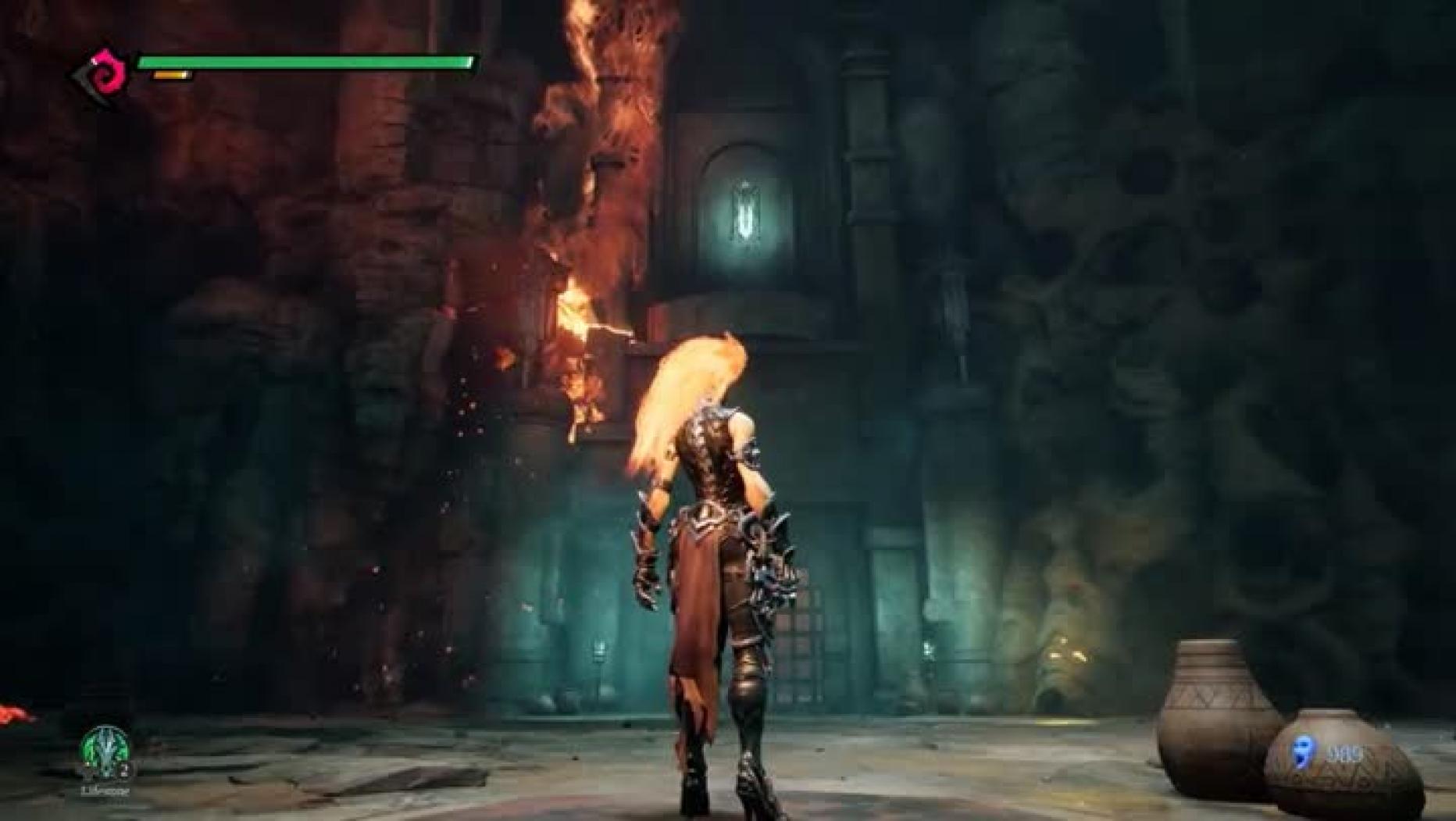 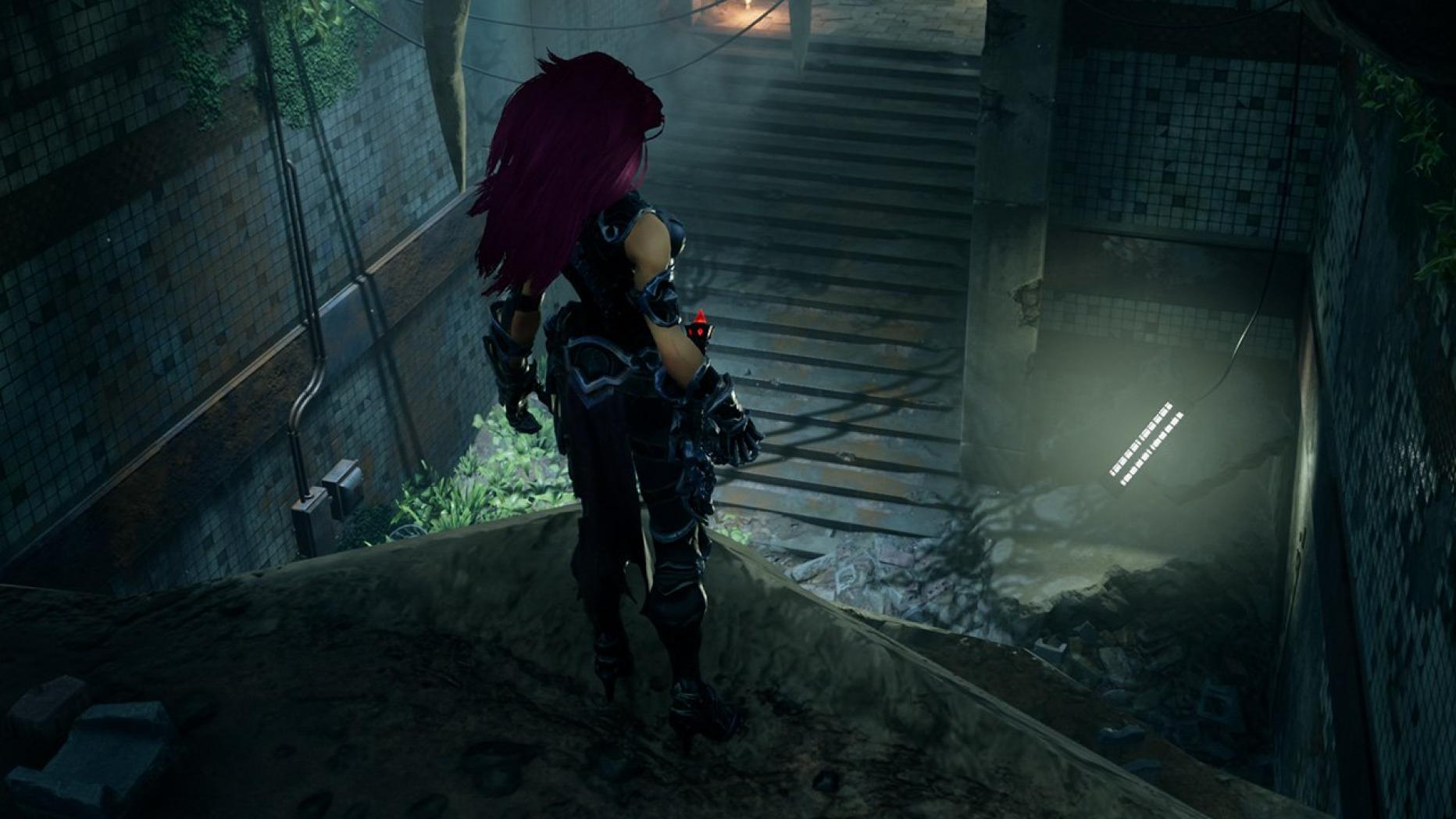 And the eighth mortal sin …

Technically Darksiders 3 presents itself very mixed. While the graphic style known from the predecessors is maintained and continues to score with its distinctive, comic-like characters, the quality of the world to be traversed varies massively. The basic design of the same has succeeded throughout, but in many places, the environments remain unpleasantly uncomfortably detail-poor and boring. The fact that, despite these deficiencies, the engine always seems to be overtaxed and the frame rate breaks down, may be an optimizable little thing, but it is nevertheless very unfortunate.

Worse than a few performance crashes are a handful of serious bugs I had to deal with in the unpatched pre-release version. One of them just ate up my memory with over 20 hours of play and forced me to start all over again. Although the first patches have now been applied, I cannot say whether this risk still exists. But other problems, like a memory leak or a barely working keyboard control, seem to have been fixed by now.

For the ears, first-class voice output is offered, as in the predecessors, which doesn’t need to hide behind elaborate animated film productions. High musical quality is also provided, although the melodies themselves are only slightly different from the usual. Exceptions are the dramatic pieces in boss fights, which drive the already high adrenaline level even higher during these sequences. The background noise and sounds are also very well done, especially various weapon blows sound very convincing. So there’s hardly anything wrong with the game in the audio area.

Whether you like or dislike the close following of Darksiders 3 and the Dark Souls series, everyone has to decide for himself. For me as a fan of both franchises this fact was a positive surprise in any case. Even if the game doesn’t come close to the original in any aspect, it’s fun and for me personally Darksiders 3 is ranked after the first part, but before part 2. Besides the painfully missed (because far too rare) puzzles, the sometimes serious technical problems, which were delivered with the version I tested, are the biggest point of criticism. Those who liked the predecessors and can live with the changes mentioned will certainly enjoy the adventures of anger.