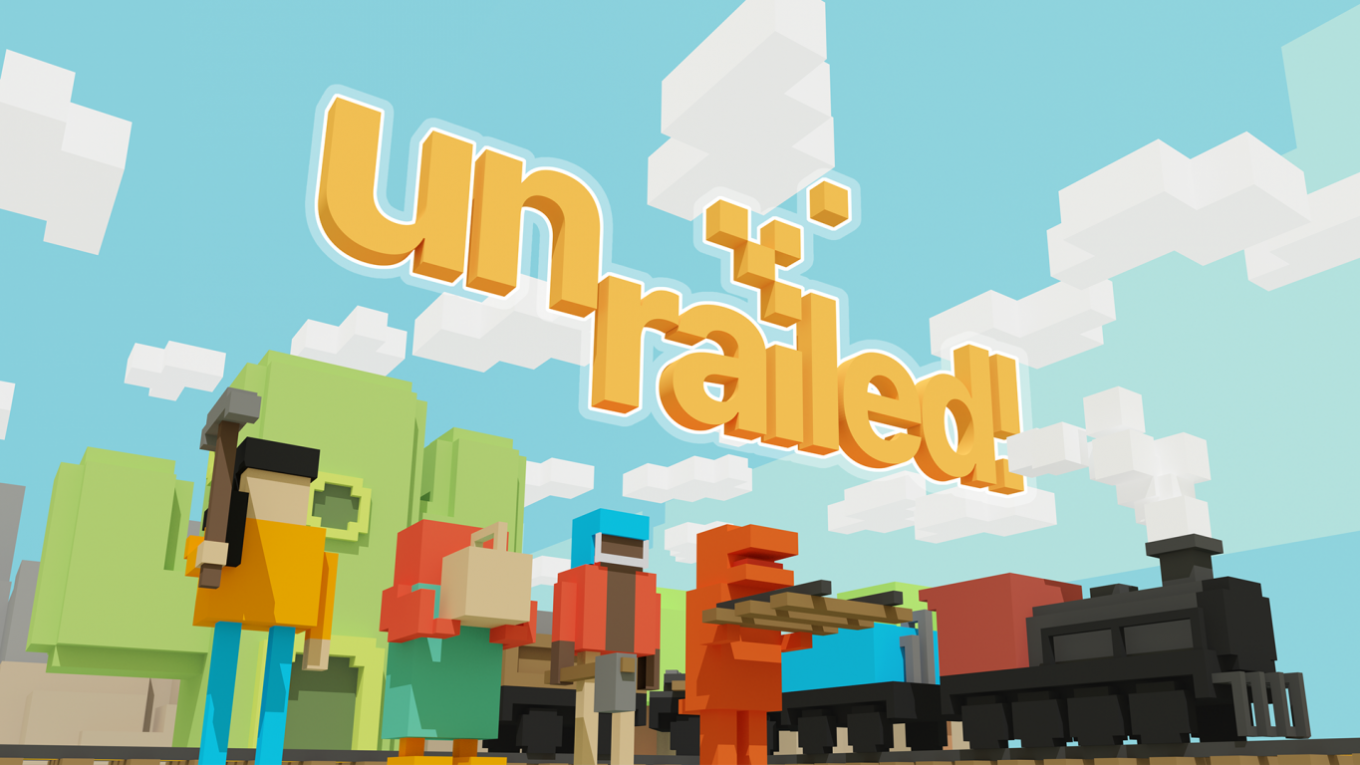 Do you miss the times you where with your friends at home in front of the screen playing? No matter whether with each other or in Competition, and the common Gaming was always something Special. Unfortunately, less and less Games implement nowadays is a local Couch co-op mode. It is precisely here appears Unrailed on the image surface in order for you in the sense of at the time, to empathise.

The train without the tracks

Together with Daedalic Entertainment, the Indie Studio Indoor Astronaut his debut work called Unrailed developed. As the Name suggests, play train tracks an important role. The aim is to guide the train from one station to the Next, but, unfortunately, are located between the two train stations with no tracks. That’s where you come into play: with up to 4 players from your resources, produces tracks, and placed these in real time in front of the moving train. You guessed it? Time is scarce here. But before we look more closely, we come first to the basics.

In a short Tutorial, you will learn the bare Essentials. Your iron and wood need to remove with the appropriate tools, and to the camp wagon transport, therefore the production of making tracks wagon. This places you can reach in front of your locomotive until you get to the next stop. By the way, you should also give to the engine of the locomotive eight, and in case of Overheating, with a bucket of water to cool. You have completed the Tutorial and the game principle is understood, you find yourself in the game menu. Here you have seen before the control, because instead of normal Select by the click of a mouse, moving your character on the desired field. The control is simple: Four buttons for your character to Move, A to Dashen and One for picking up and placing objects. The menu design works very well and is more entertaining than a Classic. Have you decided whether you gamble online or locally, it’s in the game modes settings – game mode and the difficulty here is to determine, in addition, you can enter a Seed for the procedurally-generated levels.

At the time you have the choice between 3 different game modes: Quick – you have to prepare the train to a destination of the path; Endless is virtually an endless concatenation of the previous modes, but you can upgrade your train at each station; Versus work, with the difference that in 2 team competes to see who can reached without prejudice to and the fastest way to the next station. Since you have the game fairly quickly, within a few minutes, a round is finished and this is the four of rather simple you will probably be most of the time in the other level types spend. In endless mode you can every lap and try to surpass your record, what is your motivation in the long term. Additional objectives and collectible objects you find what you Golden screw insertion. With these reinforced and lock advanced you your loyalty to Steam – those Who pick up the Screw properly, has a decisive advantage! You play Versus, you will start with an additional cannon wagon, with the help of your rival, you can light a fire under roof: wood speeds up the enemy’s Railways, dynamite your up against players for a short time out of action. The struggle against time and other players offers a lot of thrill and a feeling of success, assuming you reached the goal first. 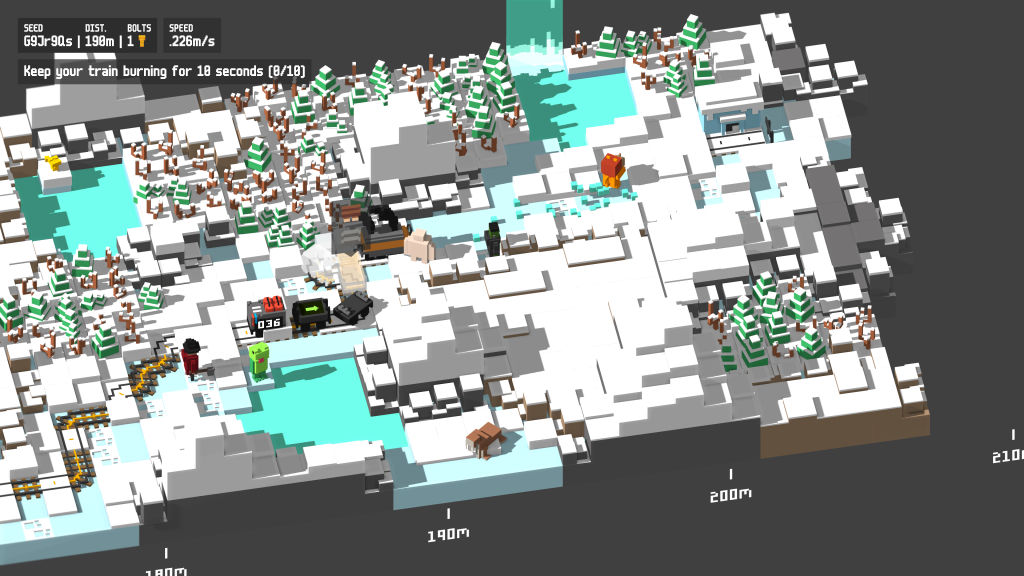 Two down, One to collect and the last lays down the rails

As previously touched on, we come now to the time factor. The train leaves once, he namely only at the final destination and brings a mountain of tasks. Resources to promote this transport, building bridges, the train cool rail. All this and more will be addressed by you at the same time. So don’t think too long, otherwise you’ll have to start all over Again. So you don’t fail it, you need a good Team coordination. Spread the work sensibly in order to avoid unnecessary routes. Logically, the railway driven your most easy-to fourth-through Meadow, desert and snow-white landscapes. Because with the progress of distance you get in a new, bigger biomes. The game design is quite simple, what is in this game, the principle is also of advantage, as you will immediately recognize every object. In stressful situations you need to stay with the thing, quite untouched by art, and sound. That is why the background music is very unobtrusive. Except for a few work noise and a simple, but catchy Soundtrack you hear in the Unrailed only the Zughorn, which before the impending end of warns. As soon as the sounds, however, to submit a Tooth to the track in time to finish.

Due to the high number of roles which must be met by each player, the game quickly changes very messy. Because dasht in a teammate, and as a result, you can your objects. Among you still runs in all the bustle of a small error in the route planning, the blocked you the way back to the tracks and can cost you the victory, is very much frustration wide – I had thought of that first. If everything goes down the drain, each of the working sets in a futile attempt to start the location to rescue the Situation worse – Just then come in Unrailed of the most interesting events and the most surprising moments come about. Once navigated our Team directly in a cul-de-SAC, but rather than let the train collide, we Return to the way short-hand. A reward was there for the fun we had but definitely.

What do I do without friends?

You might have already read that Unrailed currently no single-player mode offers. This is implemented with Content and Balancing Updates until Unrailed the Early Access leaves. Grab that, therefore, the three best friends that overcome help you a lot of Meter. But what is needed for the common Zockvergügen? Each player first needs something to control. The keyboard you can use, also PC compatible Gampads you can add to your liking. If you are not sufficiently available, each Controller splitting. – not literally! So two players can gamble with a device. In the case of the keyboard it works quite well, but on the gamepad you have a better three. Assuming your this is called not your self or you buddy to Play with are missing, even then you must not despair, because even online you have good team mates. Using the in-game private discord channel you can find a reliable Crew, as well as talk to them. Alternatively, it is einzulanden your steam friends in the Lobby and use the Steam voice chat. In-game communicates in Unrailed only using 16 Sprites, including Emojis, wood and iron. Usually this is enough, but when a crisis arises, you should discuss you really. 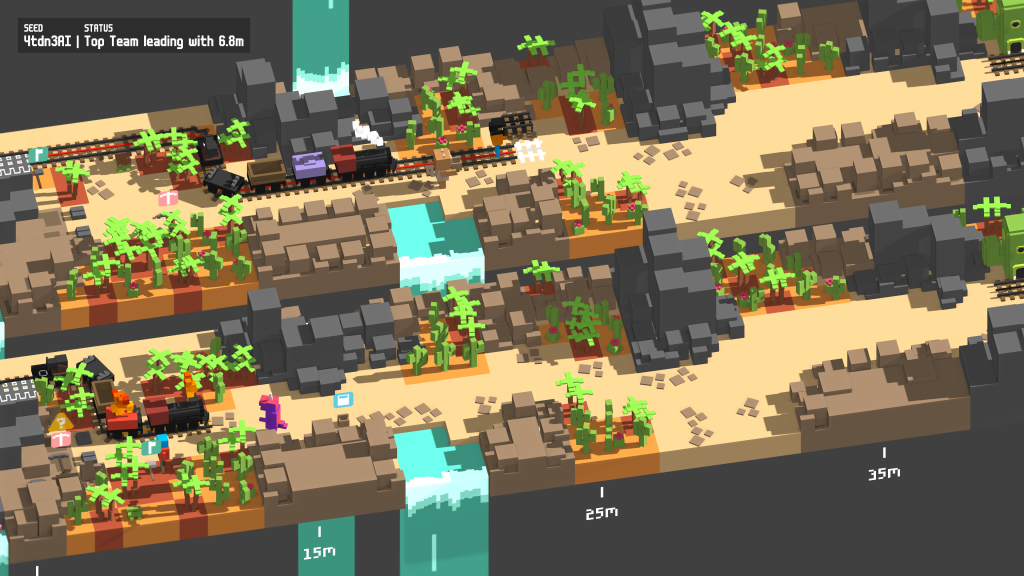 With Unrailed you already have a lot of fun, however, is the a couple of factors. You’re someone who is relaxed with Games and frustration and Stress to avoid, you should prefer to leave the fingers of it. You will not, interfere with such things, you need only a few good and reliable cronies, of which everything depends! Initially, you have to maybe with a random Onlinemates content, you have to use, however, of all the possibilities, you will find soon a good player – maybe even good friends. Recommend I would Unrailed , especially as a party game, because then you will normally be enough players to have and a fun sentiment comes up. On future Updates, and the single-player mode, I’m curious, and, most of all, I am pleased, however, to be lost with my mates again for the whole afternoon – just like old times.

A guest article by Nino Puff