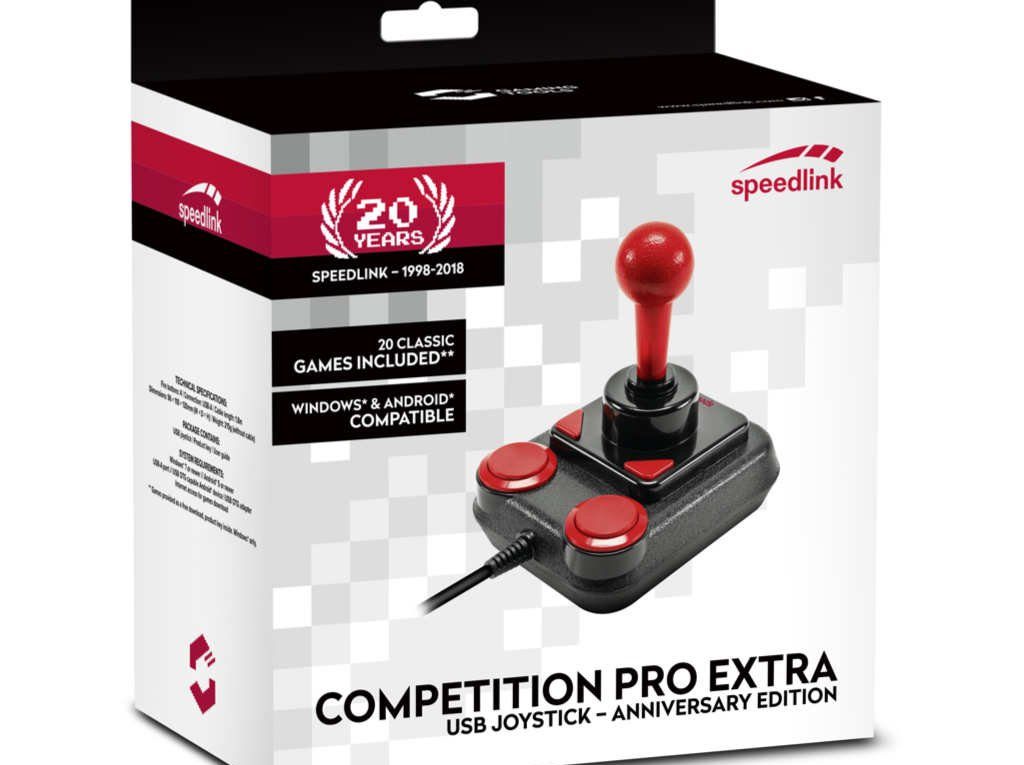 To mark the 20th anniversary of the company, gaming accessories specialist Speedlink has revived a joystick legend that is even a few years older. If you played the C64 hot with Summer Games and Co. in the 80s, you couldn’t get past a Competition Pro EXTRA. After over 30 years the joystick pioneer should now be paid tribute to properly, say the developers of Speedlink. And send the improved new edition of the COMPETITION PRO EXTRA with 20 games reminiscent of the home computer era into the race for the coolest Christmas present.

Positioned perfectly in time, Speedlink presents the new version of the Competition Pro, the COMPETITION PRO EXTRA. Based on the original from the 1980s, the classic joystick with its large fire buttons is reminiscent of the legendary arcade machines. The best: After the COMPETITION PRO EXTRA has been connected to the PC via the not so classic USB plug, 20 epic game classics can be downloaded via download code from the Speedlink page. Then it’s: Game on!

“We wanted to share these unforgettable memories with our customers and of course with the next generation of gamers,” explains Rainer Nawratil, Director of Product Management, PR & Marketing at Speedlink. This is also the opinion of the Computerspielemuseum Berlin, where the new edition of the COMPETITION PRO can be tested in an authentic environment. “The COMPETITION PRO is legendary. Its iconic design in red-black, the click of the microswitches and its reliability have inspired millions of gamers. On many popular home computers like C64, Amiga, Atari XL or ST it was the undisputed number one game controller. The classic feel and precise operation of the COMPETITION PRO EXTRA impress even today and can be experienced first-hand at the Computerspielemuseum”, adds Matthias Oborski, Technical Director of the Computerspielemuseum in Berlin.

The anniversary version of the COMPETITION PRO EXTRA is not only suitable for the included retro games, but can of course also be used for many modern arcade games. With an increased signal rate and a rapid fire mode for all four fire buttons, the COMPETITION PRO EXTRA has been carefully adapted to today’s gamer needs. With a recommended retail price of 29.99 Euro, this cult classic is also a very affordable excursion into the past of gaming.

After a free registration in the on-line Shop under www.speedlink.com as well as a registration to the Speedlink Newsletter further five plays are ready: Bouldermatch 5 | California Games | Jump Boy | Moon Battle | The Barbar