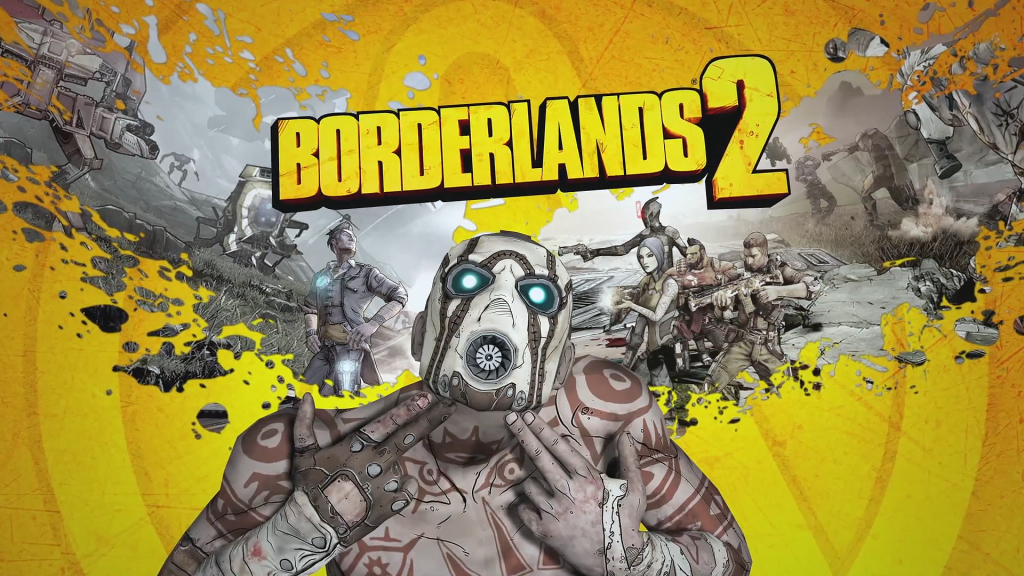 Our story starts on the desolate desert planet, Pandora, which is rumored to untold treasures in the so-called “chambers” should be located. These chambers are guarded by security guards – superhuman beings – to protect its contents from intruders. In the past, it was already adventurers one of these chambers on Pandora by a group, the chamber of hunters, opened. This event shook the planet and made sure that Eridium, a rare and valuable metal, bounced on the entire planet. It wasn’t long before this increased eridium to occur throughout the galaxy around the voice.

The Hyperion Corperation – an intergalactic weapons manufacturer which had stationed a space station around one of the moons of Pandora, took advantage of the favorable Situation and made the planet by using Handsome Jack, to your Own. To care under the guise of the inhumane conditions, trying to Hyperion now, with the help of new exterminator to bring about the mysterious chambers in the experience.

Who Borderlands 2 has played knows that the plot, characters, and game world the Highlights of the already excellent game. And even after countless hours of play and such a long break, everything plays just as good as back then. The plot has a clear red thread and there were never moments where I didn’t know just what to do. The most important highlight is the unique sense of Humor that runs through all of the Borderlands games but. Who is not Slapstick Humor-averse and the one or the other vulgar joke can get a laugh, is more than just well-supported. Especially the side missions have it done to me. Behind every corner there is to experience the strangest things, whether it’s the Psycho Face McShooty is the hysterically after someone is looking for and shoots him in the face, or the Antagonist, Handsome Jack, who persuade the player to want to kill yourself.

Thus, we would have arrived at the most important point: Handsome Jack. In my opinion one of the best video game antagonist since the beginning of the medium. He has exactly the properties that you want from a villain: He is personable, funny, mean, but his Act is always understandable, which makes him over the course of the game more and more and more a tragic anti-hero. This raises the question of whether one is in a fierce battle against Handsome Jack, even Evil. The developer Gearbox Software , has managed a character to create, which is a place in my heart has secured. Footsteps, which were not able to fill in the sequels. 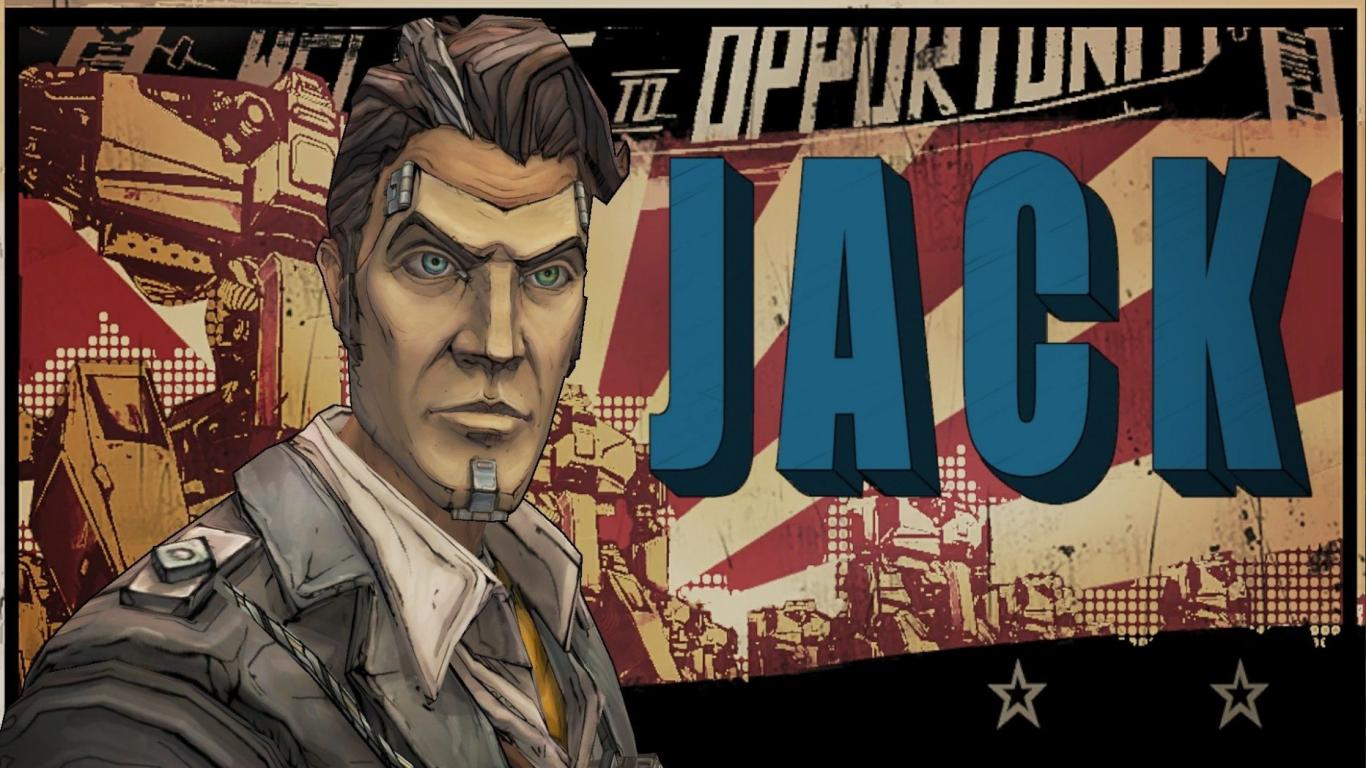 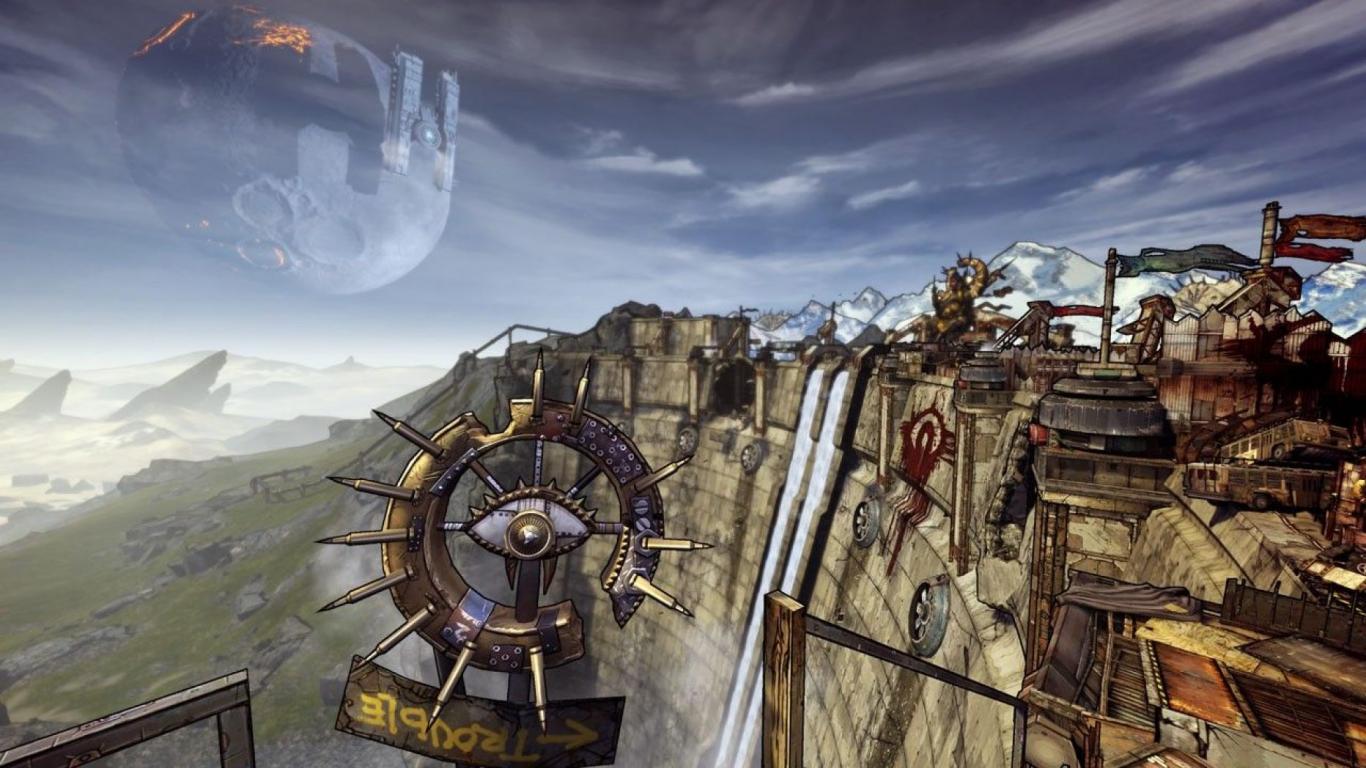 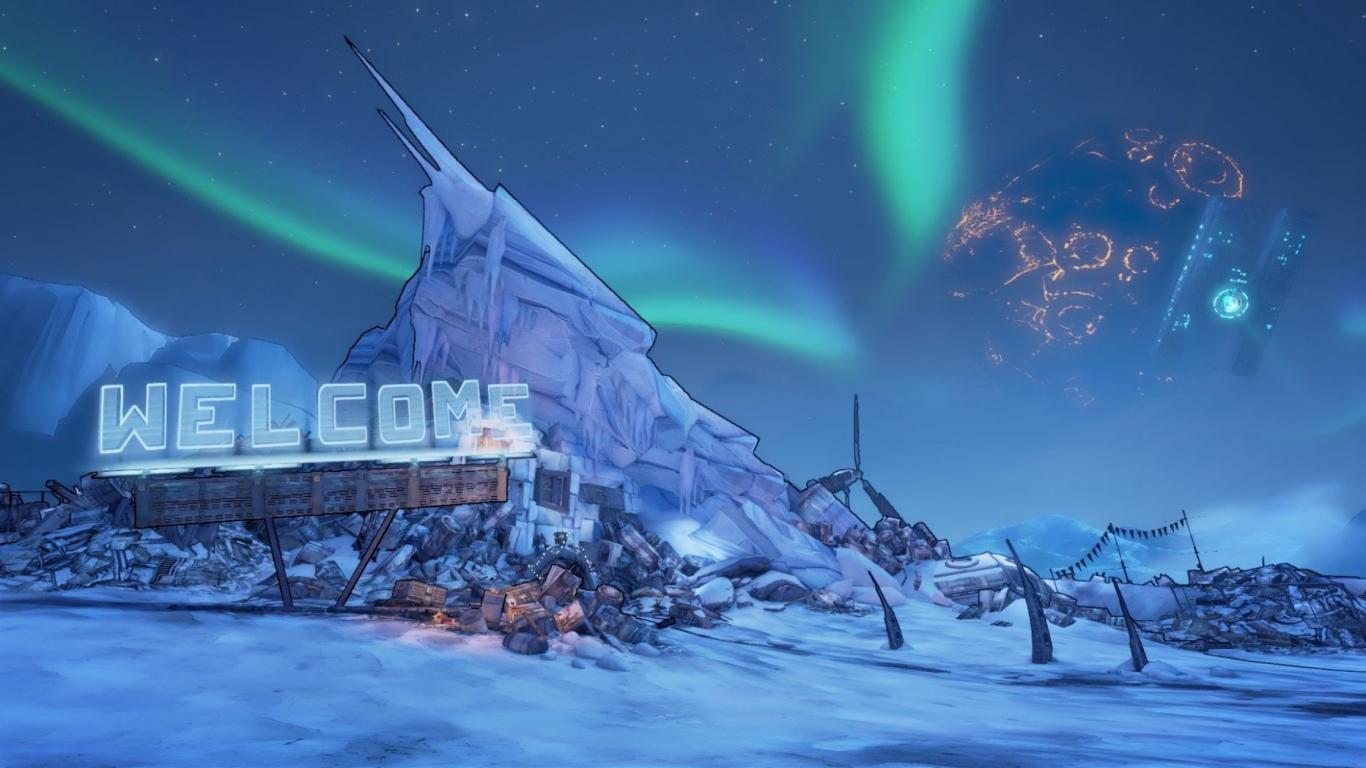 It is easy to recognize, is Borderlands 2 on a Cel Shading Look and see, even after eight years, still pretty handsome of. Graphically, the Loot is aged Shooter is definitely good. A nice Detail is the day cycle in the game, this makes the world much more lively.

The action is limited to the desolate planet of Pandora, where said must be, that in the course of the game in the different regions. From barren wastelands, poisonous swamps, to the freezing ice deserts, everything is represented. However, the locations differ in the core usually is very little. The different enemy types are mostly located in the same building, so that the player may occur after a few hours of play in spite of change of Environment, things are very similar.

With the enemy variety, however, I was very satisfied. In the course of the game is to shoot through all kinds of things; whether it is the most dangerous animal in the world is the destructive robot-box, gentlemen, or the nomads as a meat shield of Psycho-dwarves carry on. Also interesting is the interaction between the different groups. If undetected or on the field of battle, the player is not the only concern with the struggling adversary to. Often you will be on the way to the mission objective, however, in the cross fire and has several problems on the neck. These sections have pleased me very much, since the open game world thus far livelier feel.

The auditory implementation could convince me. The Soundtrack does not fit well to the game, the rest of the sound sounds bad and gives the thousands of weapons in the game have enough oomph. I have played with the German Synchronisation, which is very successful. A Highlight for me were the little things that the developers thought of have Regular breaks through Borderlands 2 the fourth wall and addresses the player directly, not only in side conversations, but also during the firefights. “Give me back my HP -” were the last words of the Psychos before I shotgun it with my Jacobs the head weggeballert got, awesome. 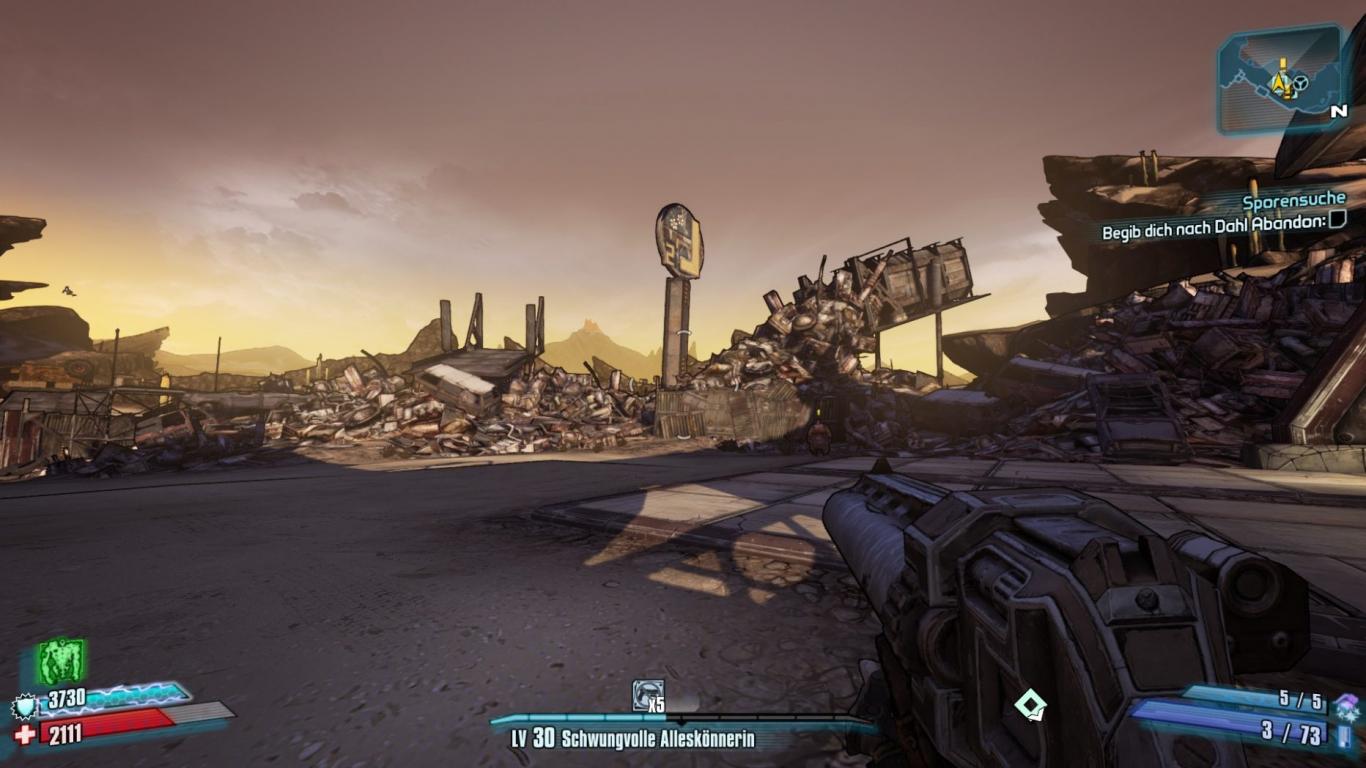 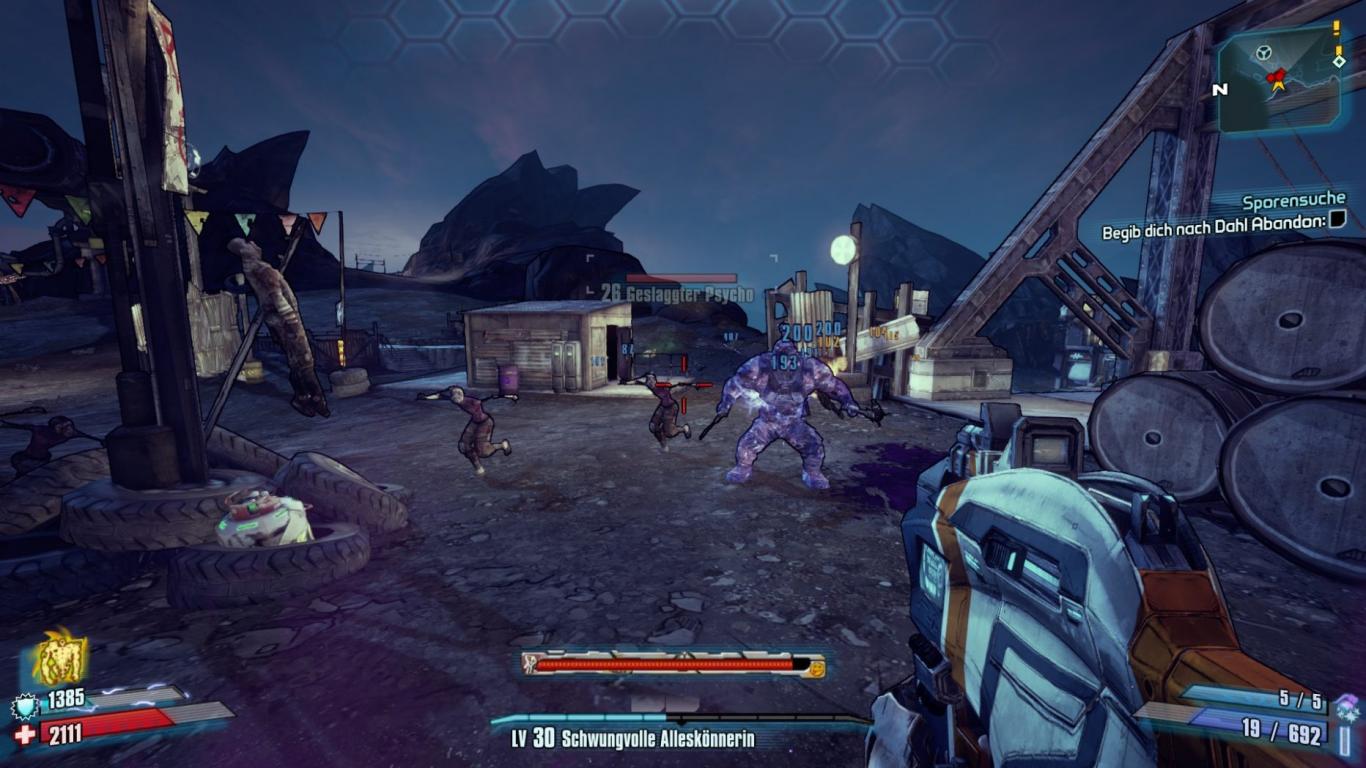 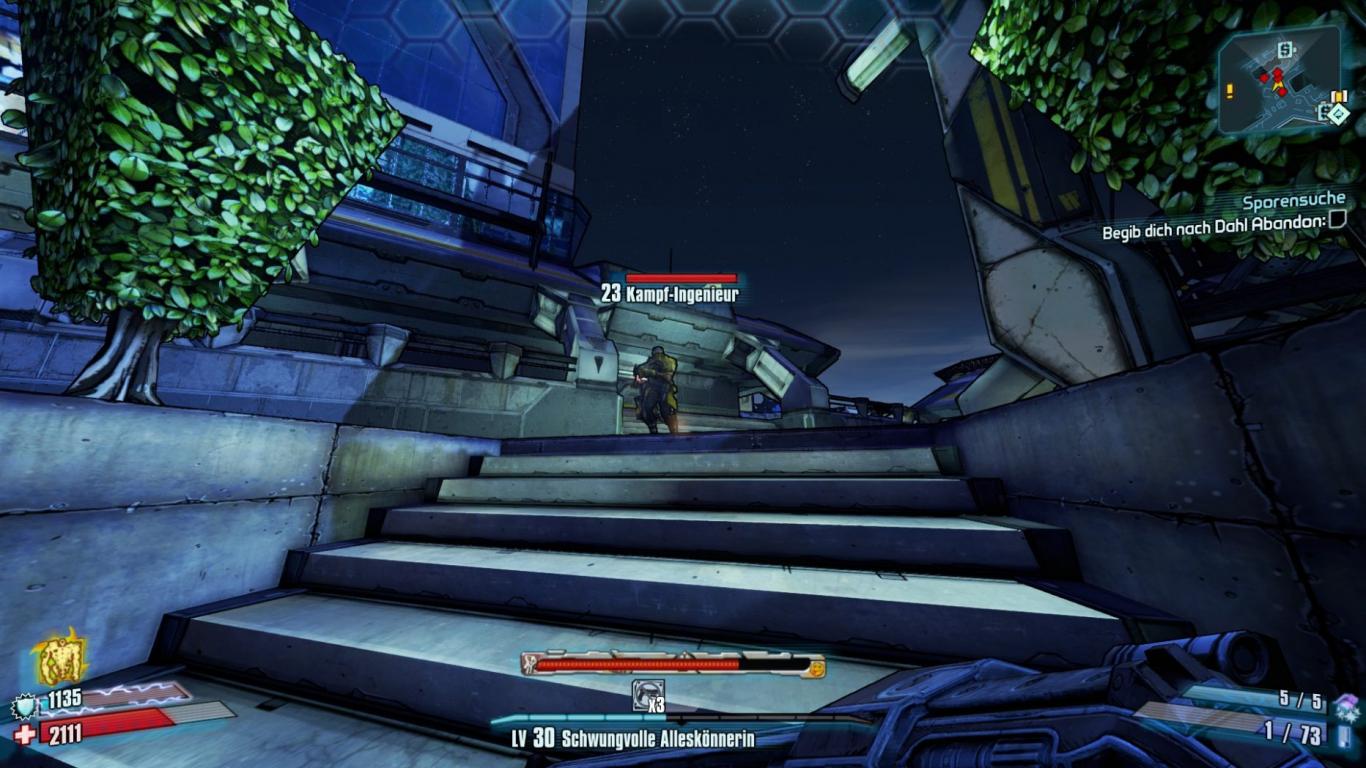 Before it goes on the trip and, of course, an exterminator will be selected. To choose from, Axton the Commando, Maya the siren, Salvador the Gunzerker, and Zer0 the assassin. Either you are playing alone or with up to three friends through Pandora. Each of the four vault hunters has their own abilities and Skills, which the player builds one after the other. Don’t worry, you can reset at any time, if you should be with one of the three skill trees are dissatisfied. But honestly, who can resist a Skill Called “Sexual Tyrannosaurus” already?

Just as at the beginning of the contribution mentioned is Borderlands 2, as well as its pros and Nachgänger, a first-person Shooter. As a player, you can experience everything from a first person perspective and is mainly concerned with shooting Around. Accordingly, there are in addition to the Jump, Crouch, and melee attacks – which, through various Skills upgraded to be able to – not a lot of what Borderlands 2 from the tried and true Shooter formula stands out. But this is in no way a bad thing, because all what is done, is done correctly. The Handling is combat super, and the Shot, in combination with grenades and a personal shield, Change for the better.

But there’s something missing still…that’s right, the Loot! Atypically for the time, dared to Gearbox Software a fresh Mix of to Date, two not combined things. In addition to the shooting, the most important Mechanism is to collect in the game is the constant Prey. What I mean by that? Borderlands 2 offers such a large Arsenal of weapons, as otherwise no other title. Behind every corner, from the corpses of the enemies out, falling, in a totally nondescript boxes lying or hiding in a Skag pile. Weapons, grenades, shields, and class upgrades for the playable heroes in the game are found everywhere. For me there is hardly anything Better than his equipment to further expand and enhance its values, until you have reached the absolute Maximum. That’s why I was able to enjoy every minute of the game up entirely. As the beans (Rocket Beans TV) have already said so beautifully: “Loot and Levels, which needs to be in there in a game“. With this statement I agree with fully.

To get the best Loot, you have to compete with the Boss enemies. All of these have certain legendary equipment, which you sometimes fall. “Occasionally” is a good keyword, because for some of the shooting iron, it may need dozens of attempts before you get the desired result. But for me it’s been no Problem. Each of the adversary is well designed and fits perfectly in the humorous embossed, post-apocalyptic game world. Whether it’s your first Time or the Hundredth, is that you fight a Boss, to me the fun of the Grind is not passed. This is possibly also the fact that the bosses are all very challenging, very crisp, but also difficult. 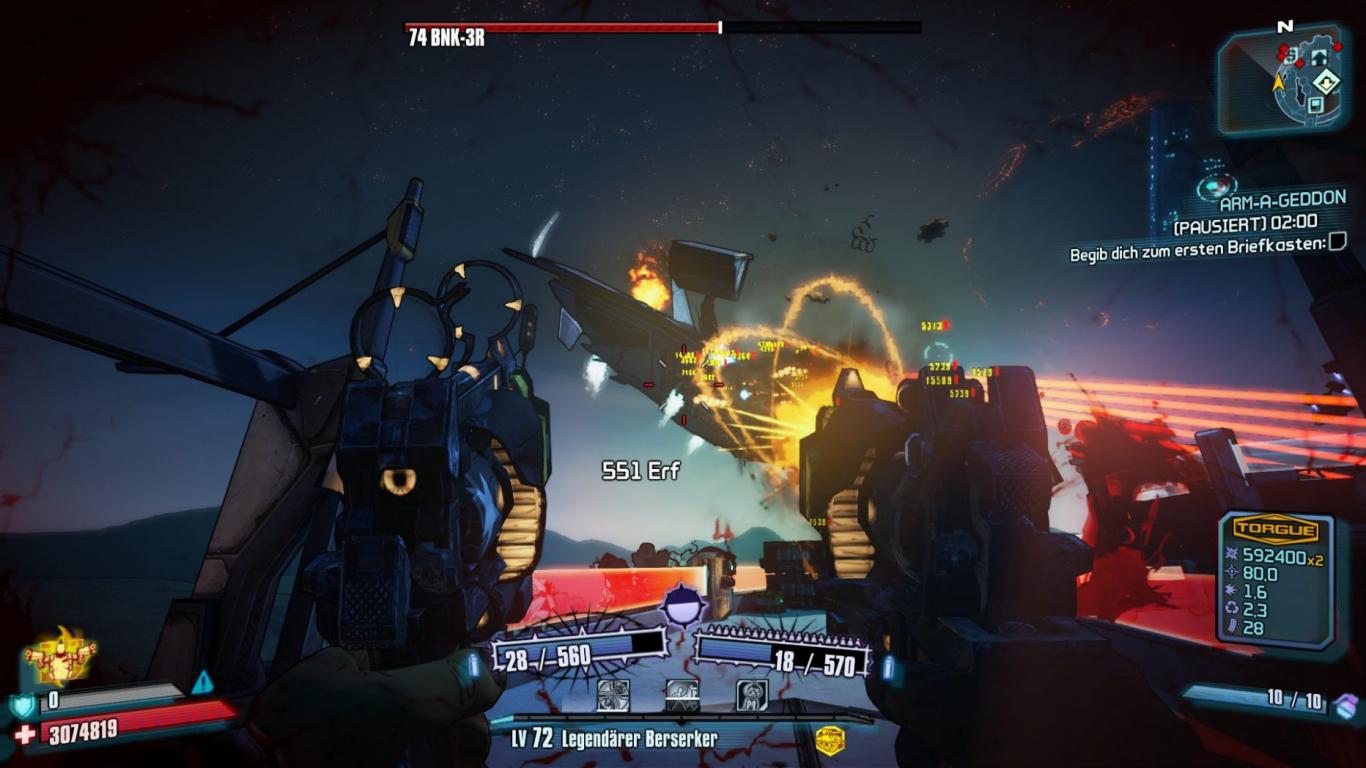 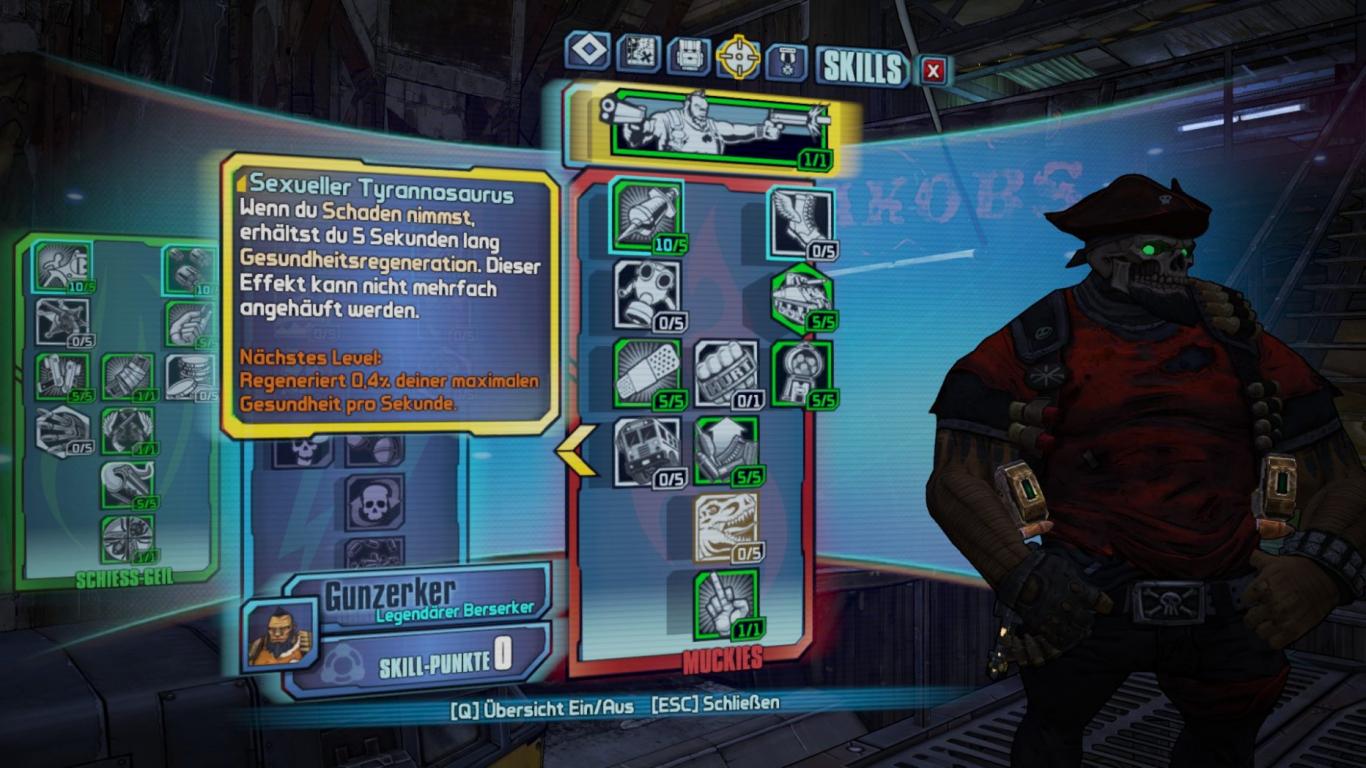 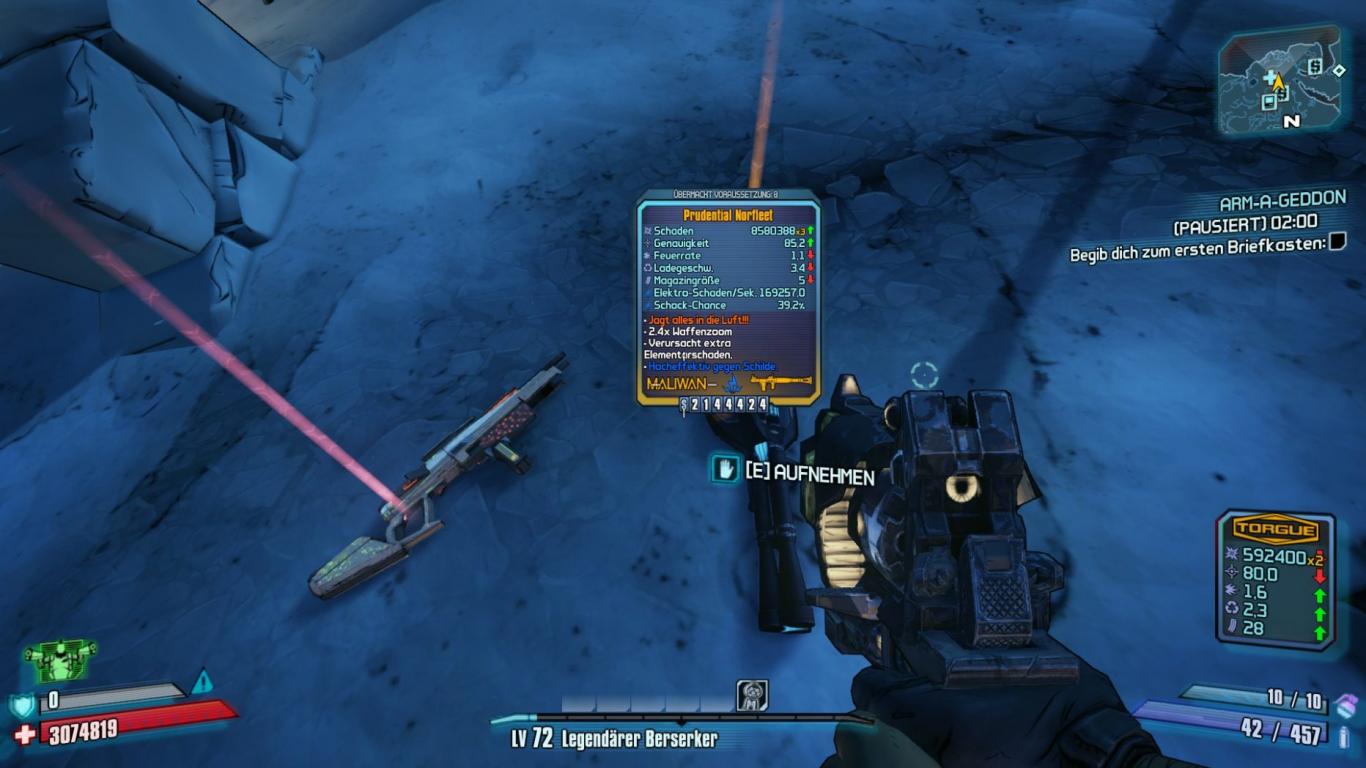 Borderlands 2 has a few years ago a place in my personal favorites list backed up and disappointed me today. The reason is the humorous plot, the Look and, of course, the well-realized Gameplay. I know that some of our players in the hunt for the legendary weapons was too lengthy, but I couldn’t play to Perfect my equipment enough. The different heroes are different enough, even after countless hours of play to encourage them to take several game cycles. And to whom even that is not enough, in addition to the Base Game a number of Free extensions and payment, even two completely new exterminator on the, he can look forward to. To be honest, for me the epilogue after a few years and dozens of game hours more enjoyment out of Borderlands 2 made. Finally, a recommendation that I rarely say: Who have the wherewithal should not necessarily superior to the four campaign expansions for Borderlands 2 to buy. These bring not only new weapons, bosses, and enemies into the game, but expand, as in the name, even the plot.