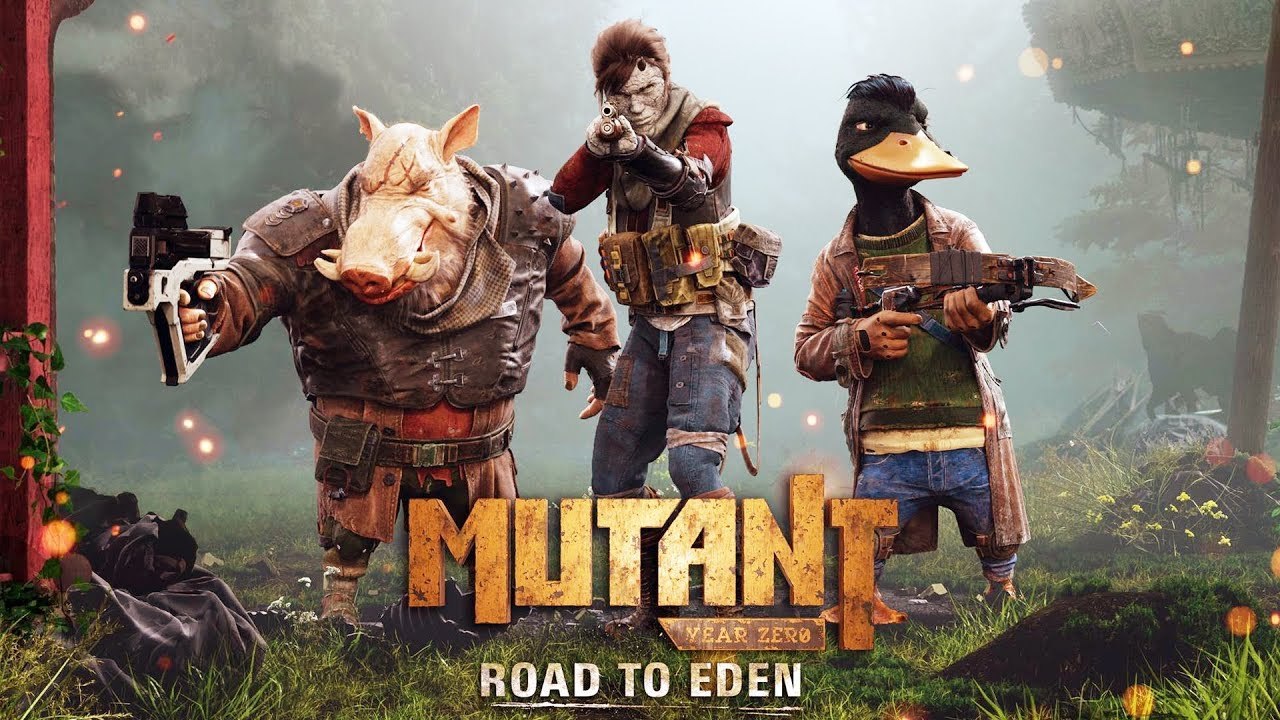 Free after the popular Pen and Paper Mutant Year Zero, The Bearded Ladies Consulting sends us to a postapocalypse Sweden. With a small group of mutated rangers, also called stalkers, we roam through dilapidated cities and hostile areas in search of valuable resources. At home in the Ark, survivors dream of a better life and a place they call Eden. For Bormin and Dux, Eden is nothing more than a beautiful lie to escape despair – until one day they are taught better. The beginning of a journey that reveals secrets that would have been better lost …

From mutant pigs and sniper ducks

Climate change and political conflicts have taken their toll. Cities lie in ruins, nature has once again subservient the planet and human civilization has remained nothing more than a whisper in fairy tales and legends. A handful of mutated survivors have gone into the care of the eldest. The sickly, unmutated old man isolates his protégés in the so-called “ark” from the dangers of the outside world. Only the stalkers – an elite group of scouts – are allowed to leave the community to search for valuable scrap in the wilderness. Bormin, a humanoid pig, and Dux, a duck-human hybrid, are among the most experienced members of this unit. As one day the engineer Hammon, valuable to the Ark, is abducted by the radical Nova sect, the two veterans, with the support of human mutant Slema, are sent on a liberation mission that will change their view of the world forever.

Mutant Year Zero: Road to Eden is a strategy game in the spirit of a XCOM 2. With a small troop of three heroes we play very crisp and demanding round fights. Planned and coordinated action as well as good positioning behind a cover are indispensable. On the one hand, because our troop is usually in a considerable undernumber, on the other hand, because each hero has only two actions available per turn. As a rule, a move consists of movement and attack. Snipers are an exception to this rule. These should be brought into an optimal position before the beginning of a fight or in an early phase of the attack. Once this is done, their turn is divided into reload and shot. Alternatively, it is also possible to use both action points for the movement and thus cover longer distances. It is not possible to attack the enemy more than once during an attack phase, because an attack ends this phase.

It is important to know your characters well and to assign them the appropriate role. Dux is, thanks to his skills, the optimal sniper. If we place him in higher positions, we can bypass the covers of our enemies and thus improve the chance of hitting and damage potential. If we don’t have a height advantage due to the situation, Dux can swing himself up for a train with his “moth wing” ability. Bormin is a front-line fighter and deals a lot of damage at close range, and his Sau Run ability can also disable enemy units for several rounds. Selma can grow tendrils out of the ground, limiting the opponent’s troops in movement. These abilities should be used with caution, however, as they require a longer cool-down period. 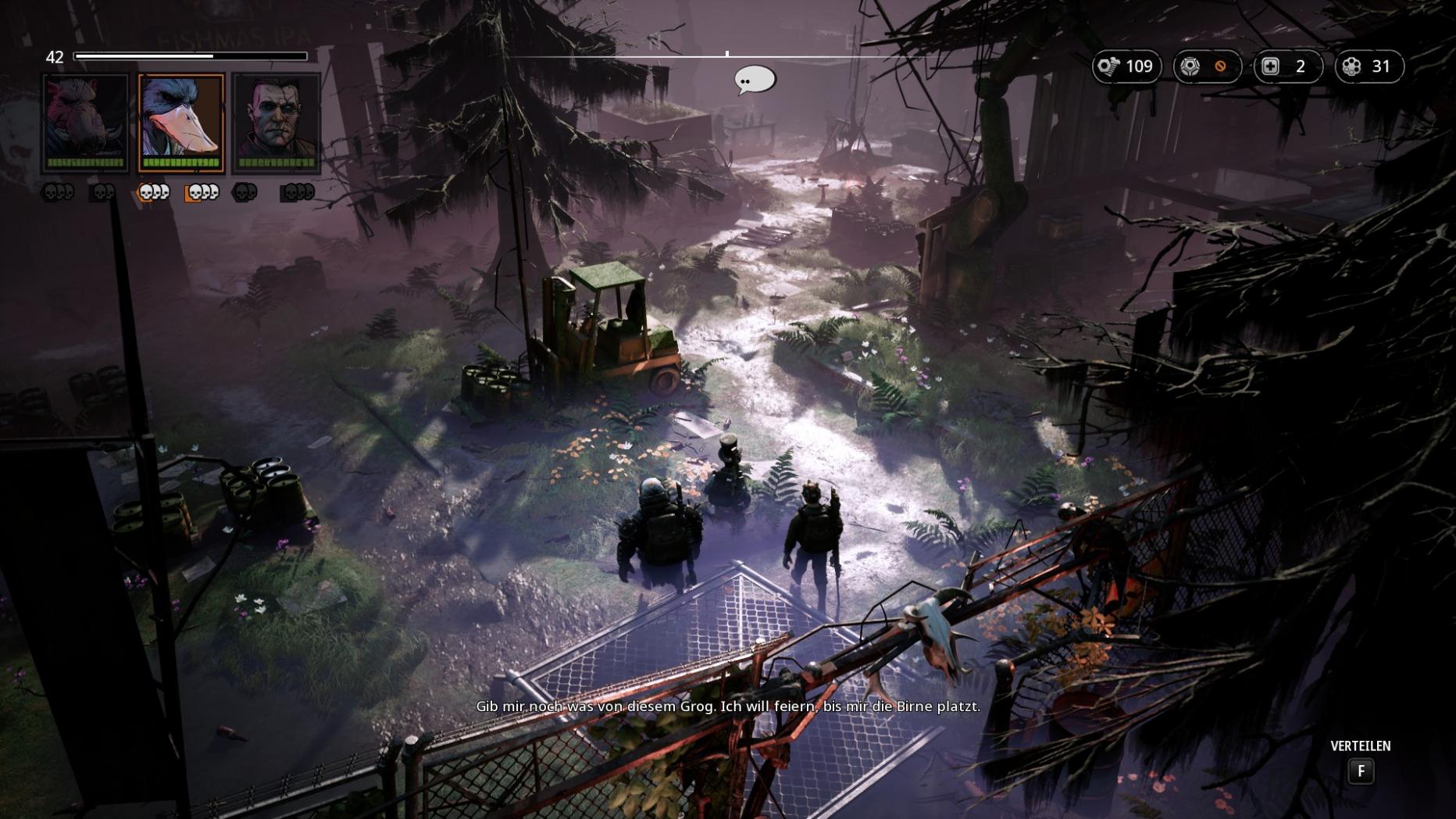 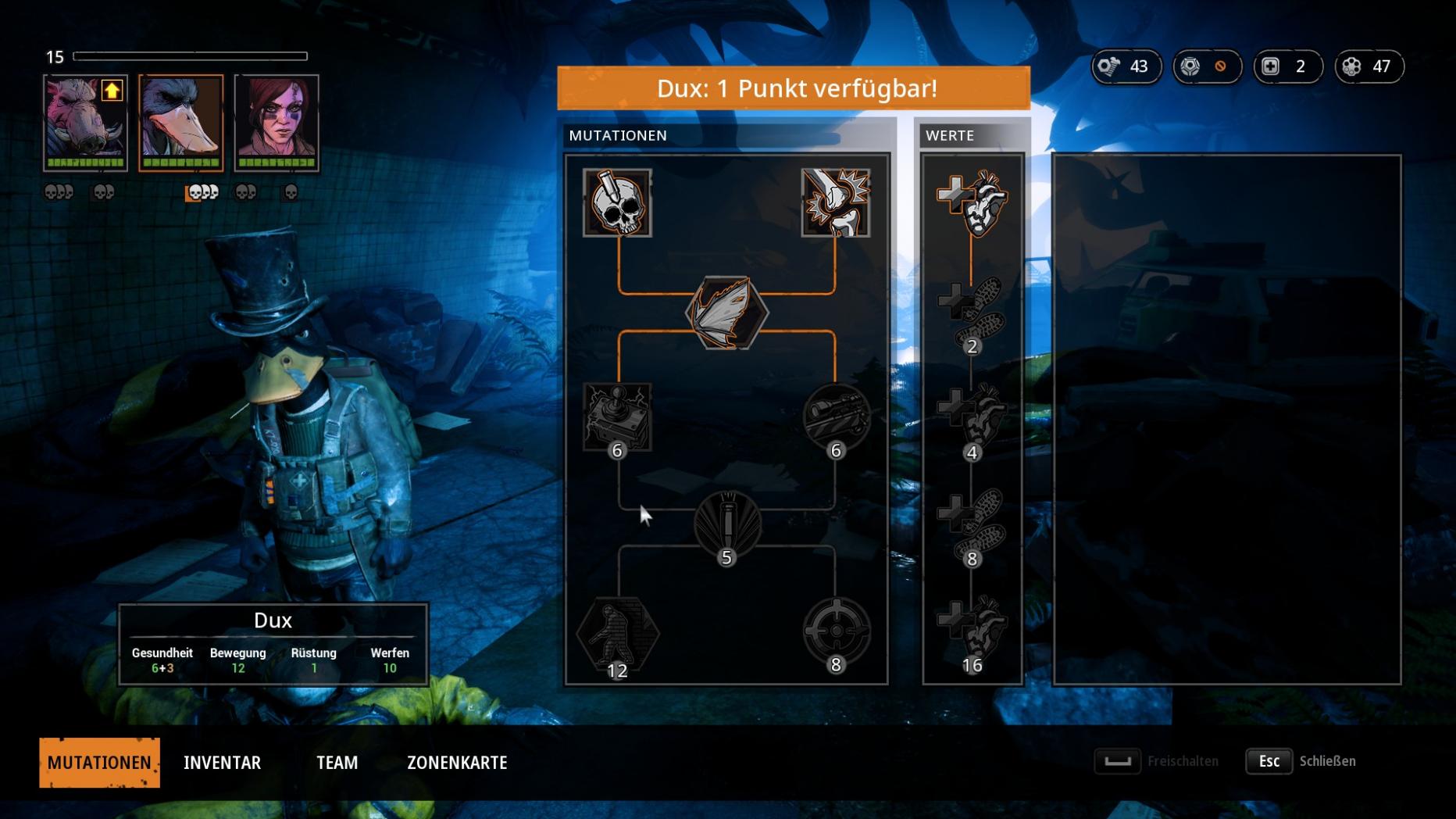 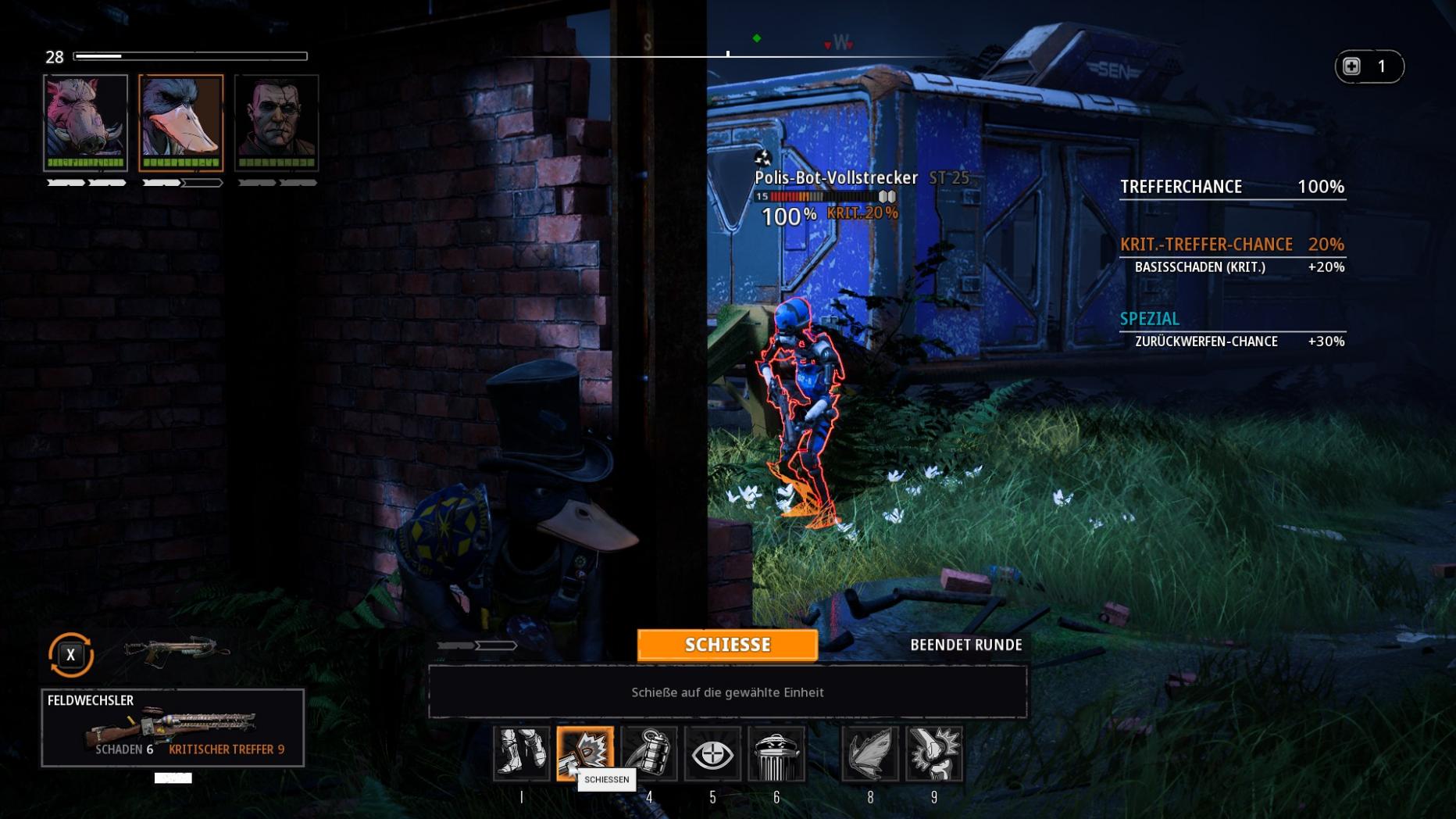 Although Mutant Year Zero: Road to Eden’s skirmishes are clearly based on the XCOM series, it has enough tricks to build its own identity. One of them is the possibility to switch off isolated units in stealth mode. Opponent fighters have a certain sight radius outside of combat. Indicated by a white circle surrounding the enemy. If it turns red, the potential victim is about to discover you. By the way, it doesn’t matter if you’re standing directly in front of a unit without being screened – as long as you’re not within the displayed radius, you’re on the safe side. It may be a bit strange to think logically, but it makes sense in gameplay.

The possibility of splitting up your squad and controlling the protagonists individually also proves to be practical. Thus, they can be placed appropriately. If they then have a second weapon with the addition “silent”, then nothing stands in the way of a successful ambush anymore.

If we have hit the bad boy properly on the skin, we may pump, completely role play, won mutation points into various abilities, Perks and advertisements. Although the skill tree of each character is at first glance quite meager, each development has noticeable effects. So that the thing does not become too simple and the tactical component is emphasized, we can equip from the unlocked abilities only maximally three per mutant. 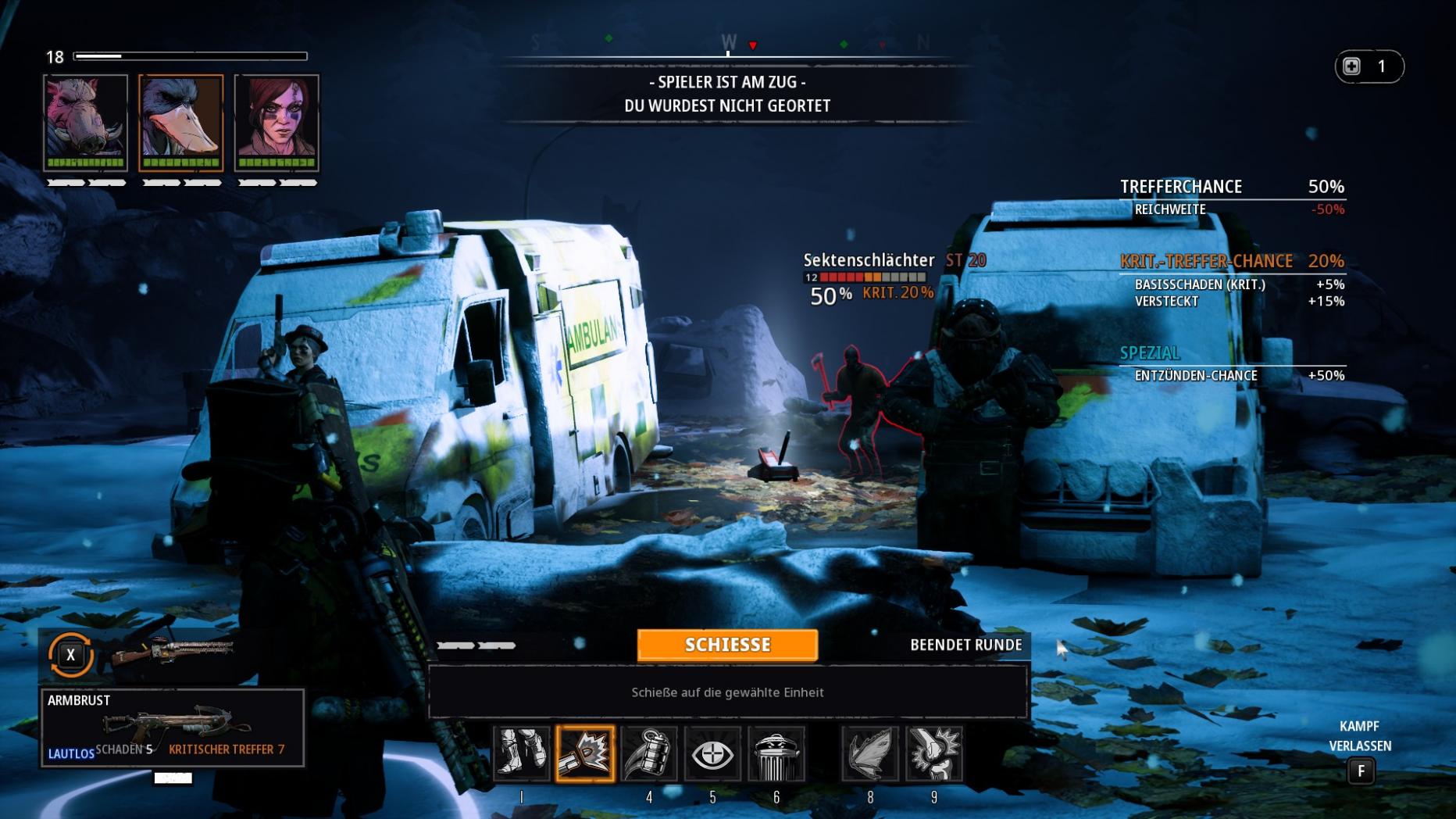 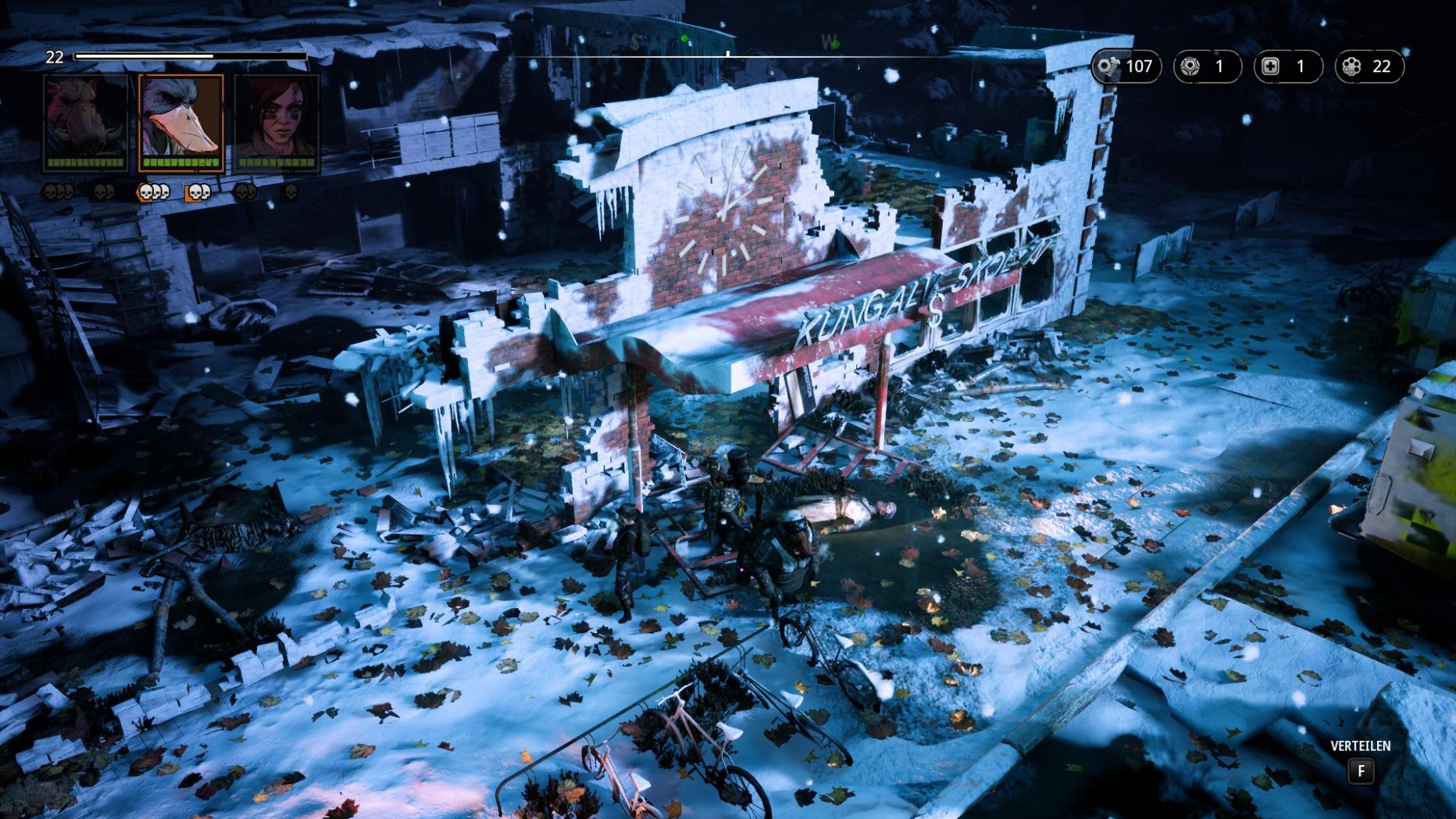 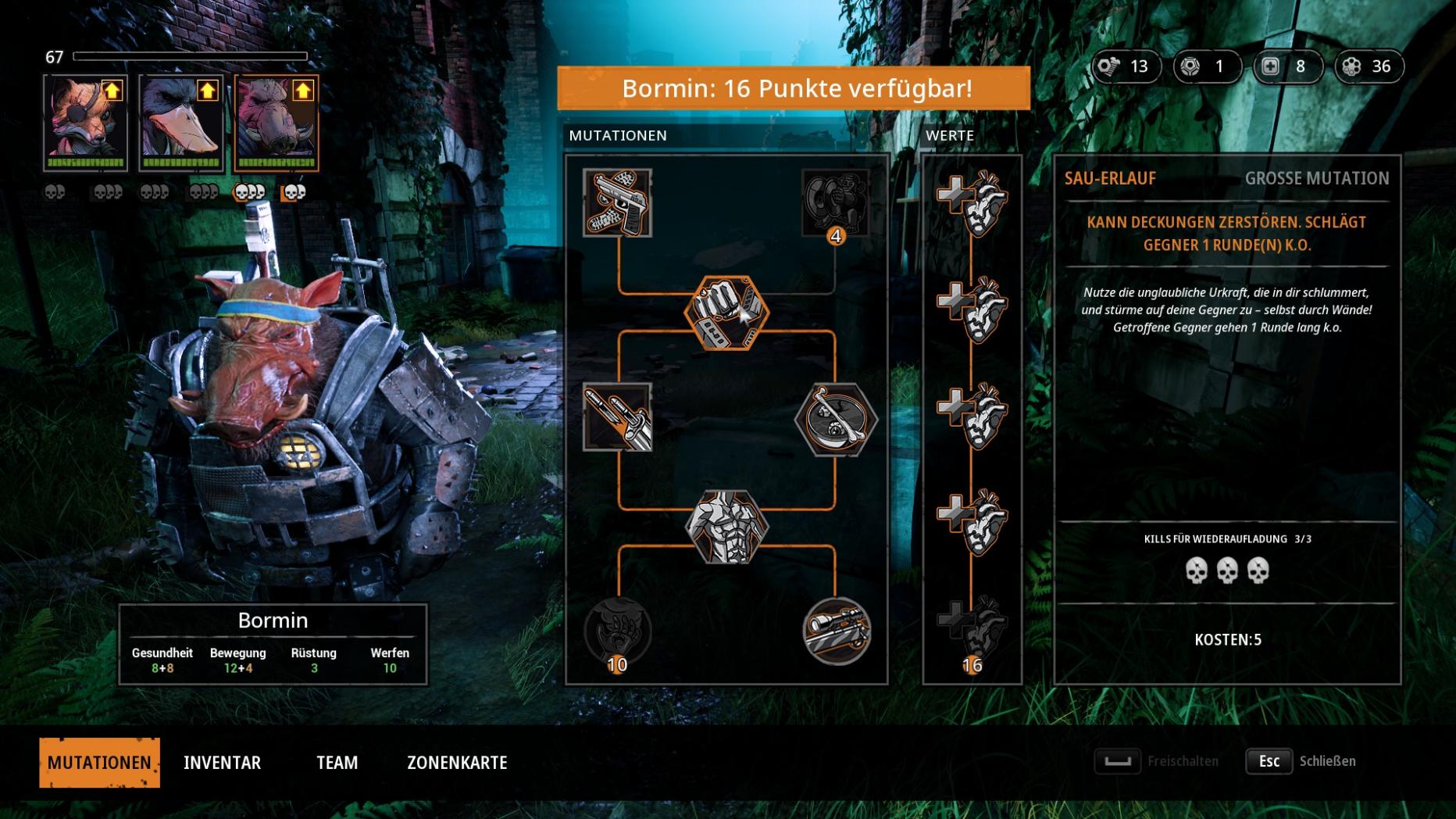 In between the fights we explore individual areas. These areas, called stalker zones by the stalkers, form decaying cities, forests and industrial areas and we comb them in search of scrap metal, the currency in Mutant Year Zero: Road to Eden. With this currency we can buy equipment in the Ark. In more heavily guarded areas, you may occasionally find chests containing treasures such as new armor, weapons, or mods. You will also find some weapon parts in the zone. With these you can improve our humming in the ark.

We move between the zones by fast journey on a very beautiful and hand-drawn map. We can also travel to the Ark at any time to improve our troop or to listen to the stories of the Elder. 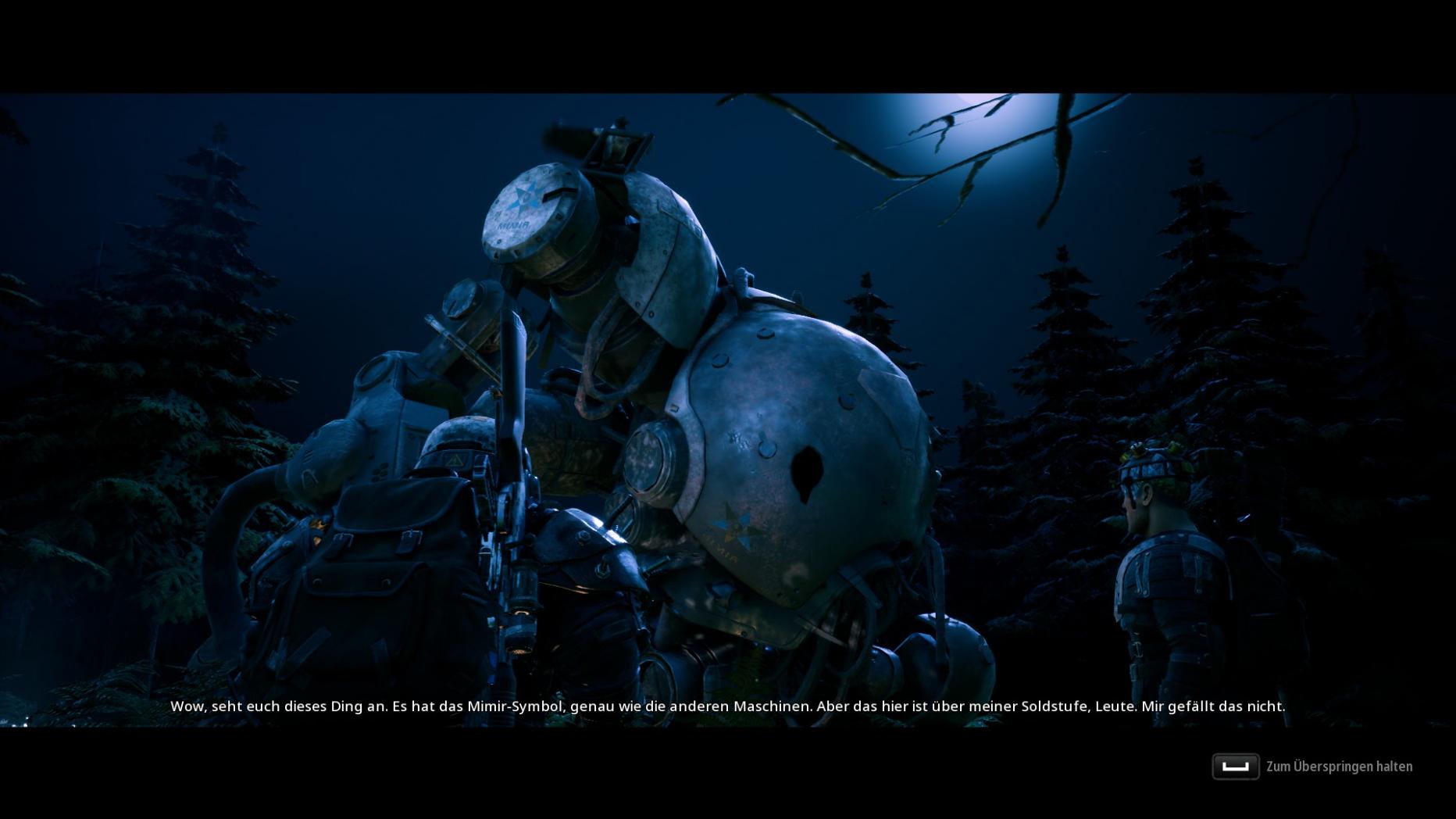 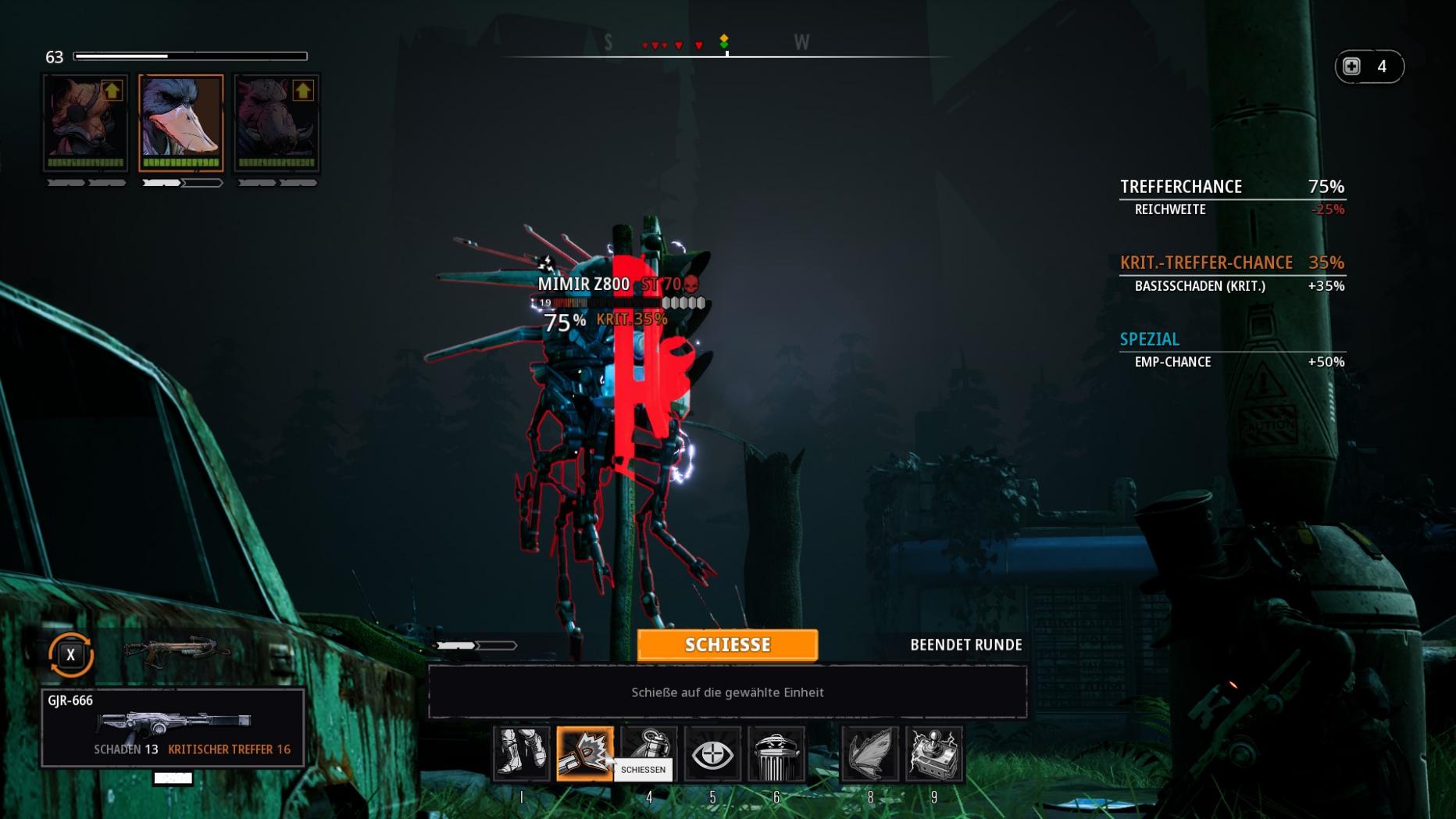 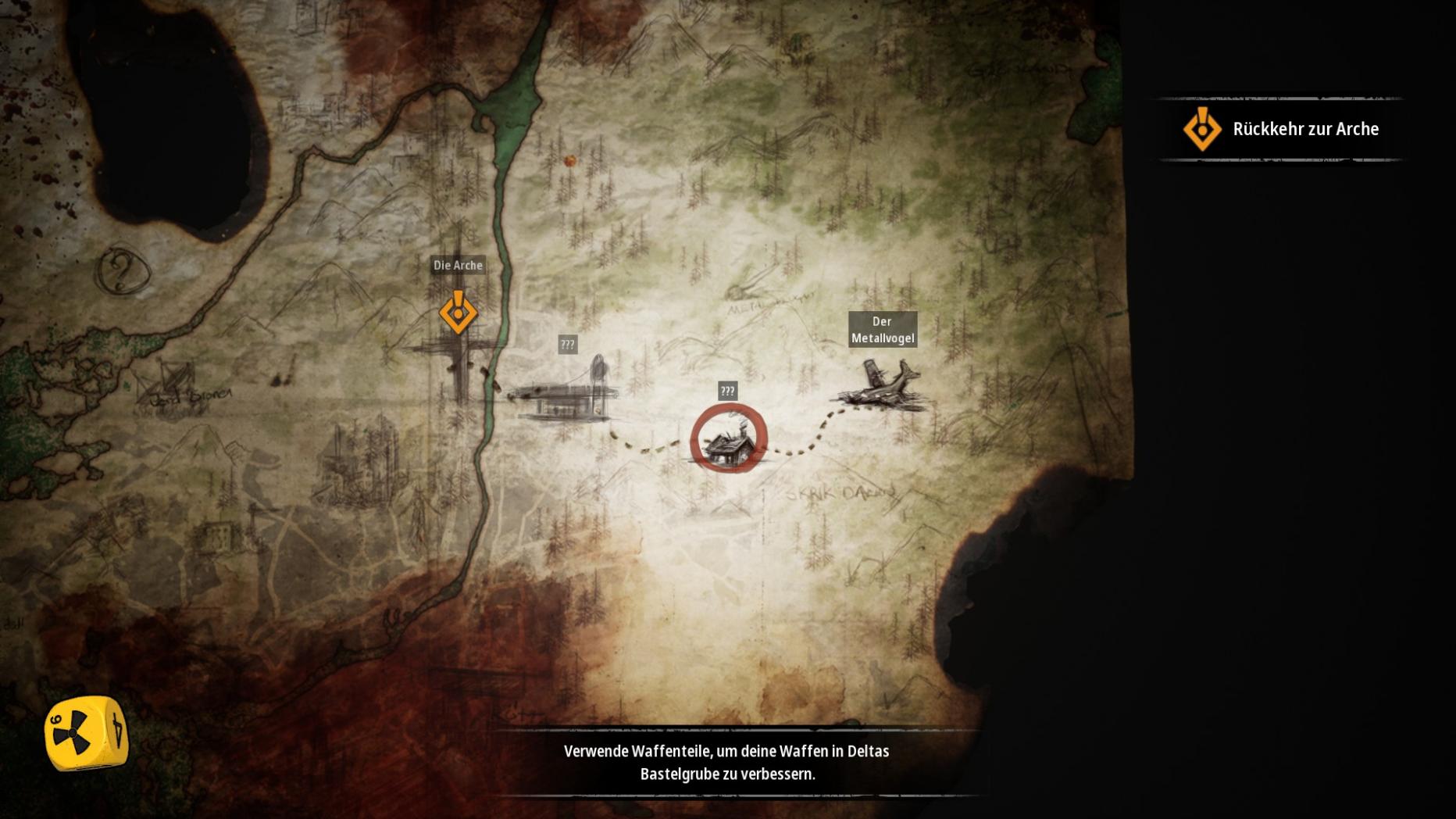 When I downloaded Mutant Year Zero: Road to Eden, it was the size that surprised me most. Because with his 6 gigabyte heavy fighting weight Mutant Year Zero: Road to Eden is not that big. It was all the more amazing for me that the graphics are not highly complex, but very atmospheric. The animal mutants are sympathetically and lovably animated, but the human fighters seem a bit strangely proportioned. I also liked the fact that the environment is completely destructible.

The control via mouse and keyboard works well and is based on genre-typical standards. It’s a pity that you can’t zoom closer to the action.

Both combat noise, weapon sounds and score are at a very high level. The great English speakers give the mutants a lot of charm and personality. 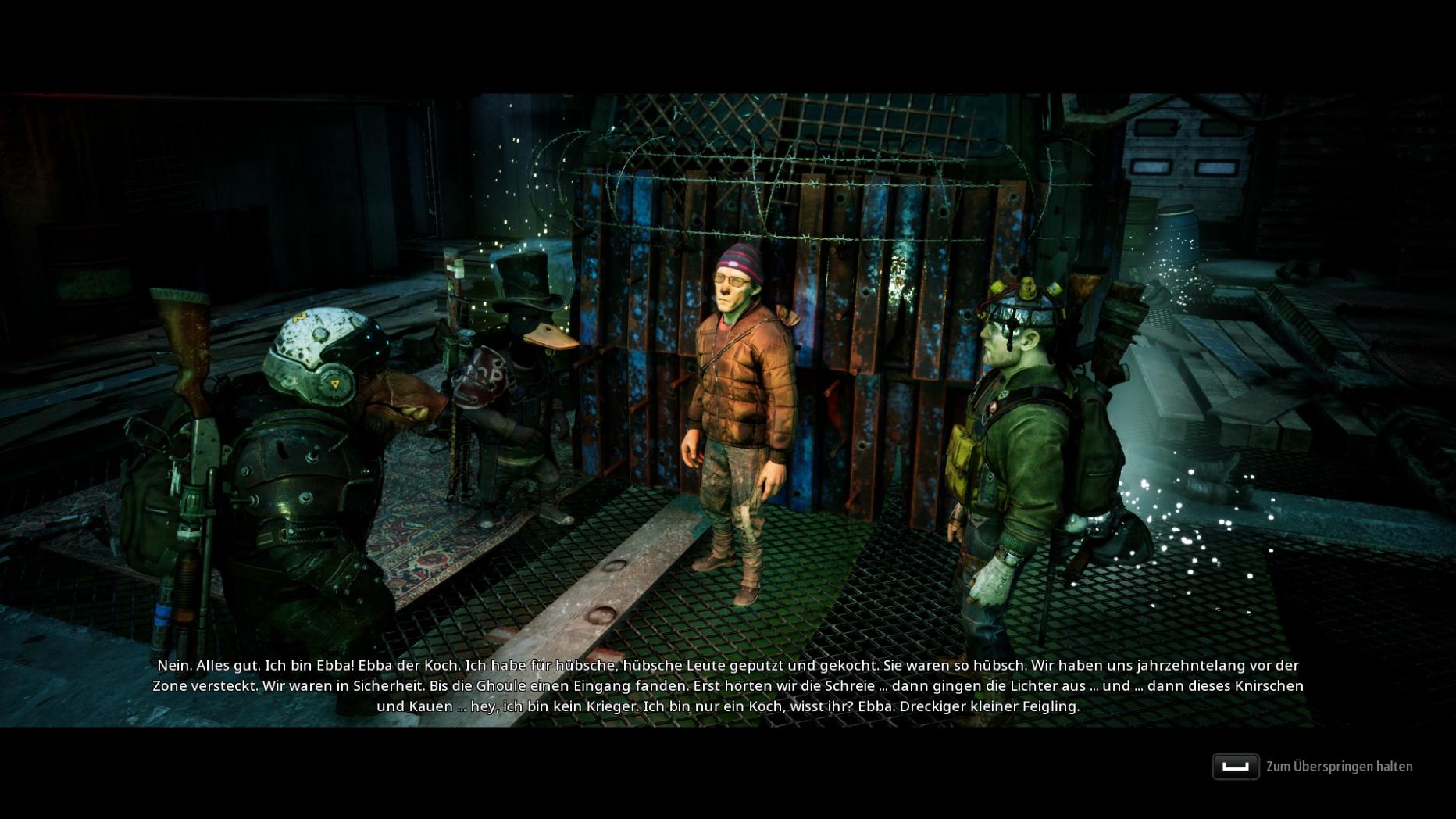 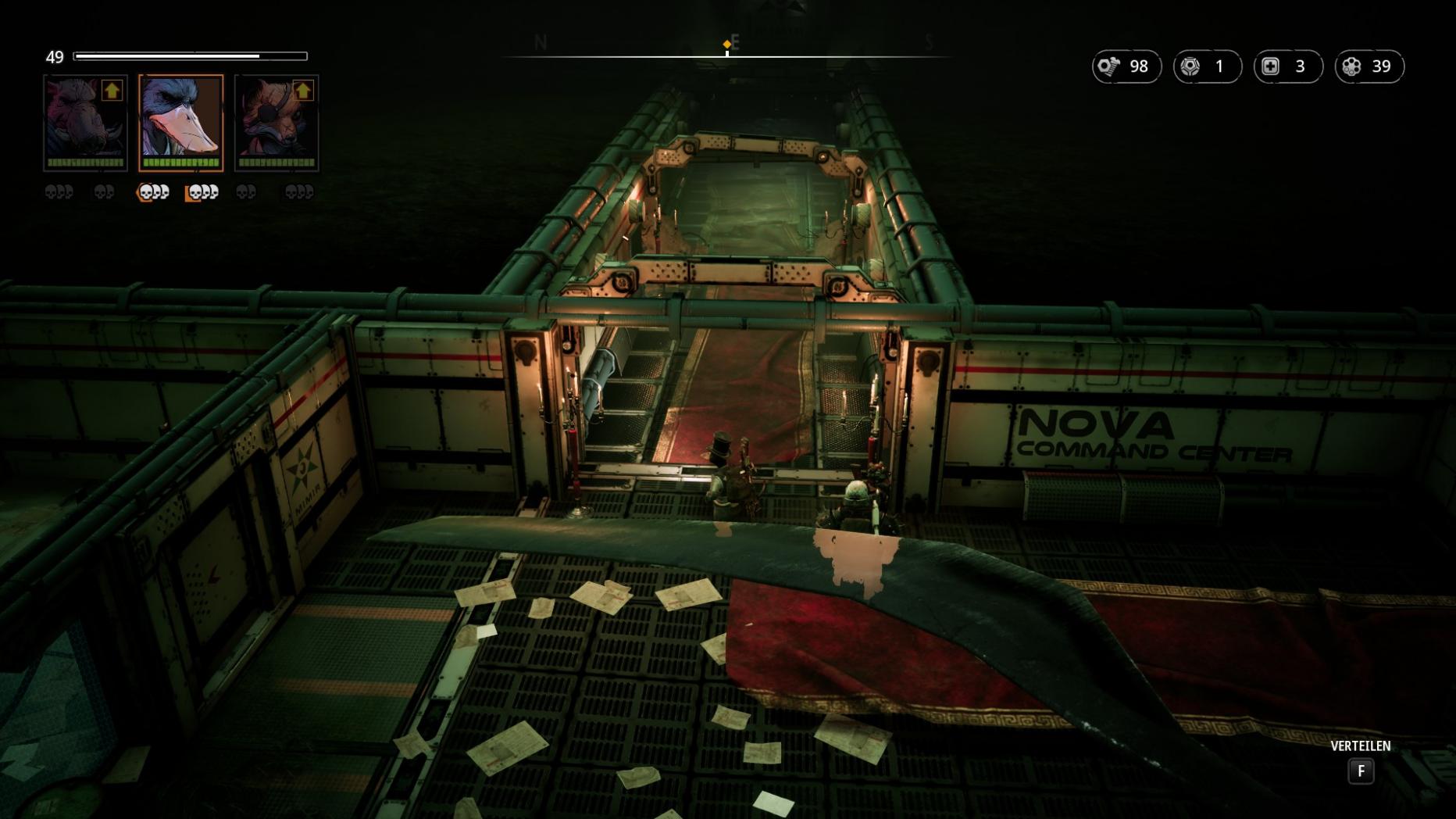 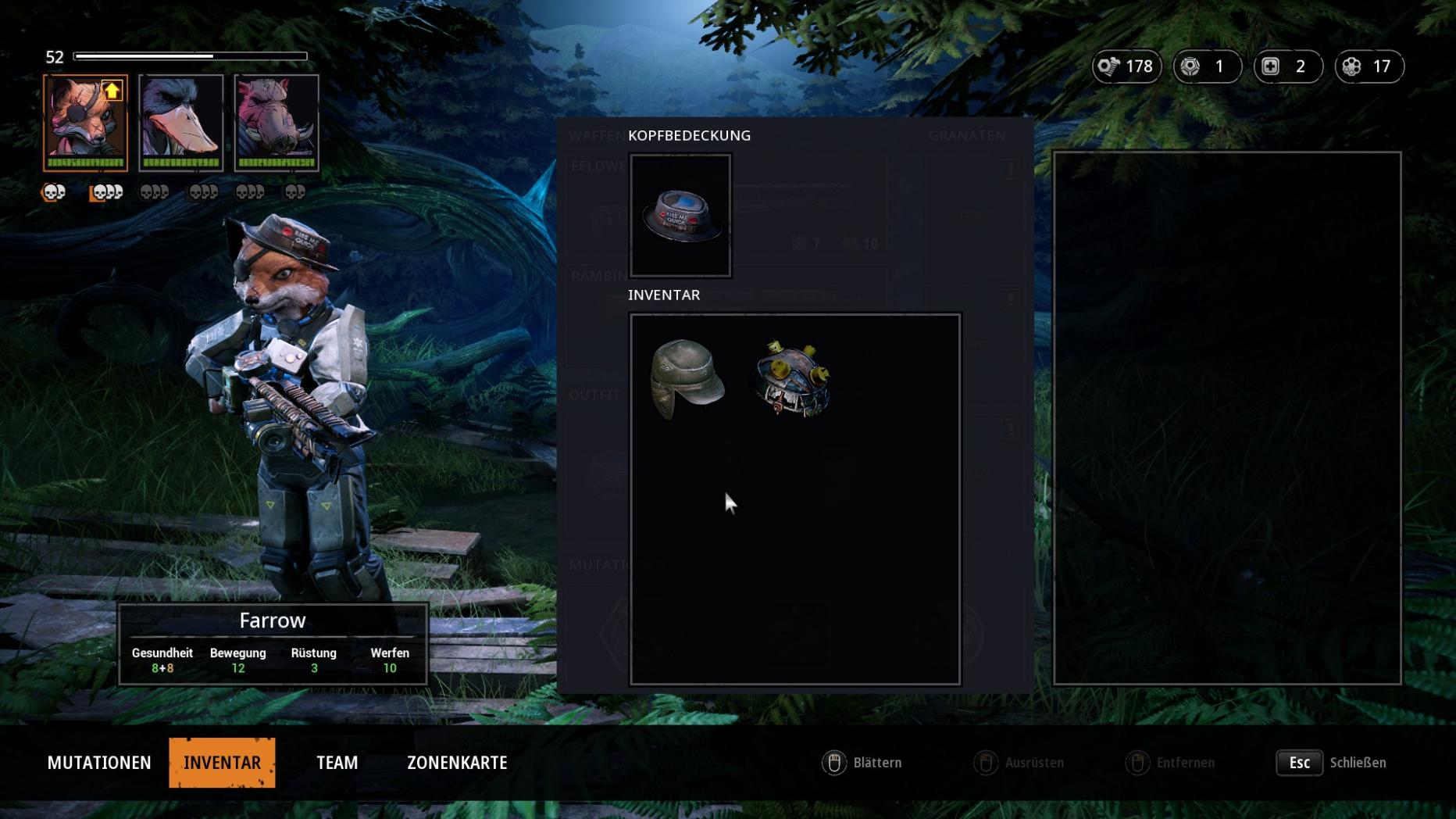 Mutant Year Zero: I really liked Road to Eden! I like animal mutants, I like the XCOM gameplay and when I heard that there are also Stealthelemente, it happened to me anyway. The fights are really tough and already made me sweat a lot at the normal difficulty level. That’s partly because of the extremely clever AI, who always tries to get behind your cover, and partly because you’re always completely outnumbered. The fact that Medipads are very rare and damn expensive doesn’t make things any easier. Mutant Year Zero: Road to Eden requires tactics and foresighted thinking. The ambushes are a good and balancing tactical enrichment. It is very satisfying to eliminate the ranks of the enemy unseen and thus improve his chances in later combat. The search for scrap metal is a bit monotonous, but since the individual zones are very lovingly designed, the problem is not angry with me. What I find sadder is that the human figures look a bit bland compared to the animal mutants. Or that the ark – which plays an important role in Pen and Paper – has no tactical value in Mutant Year Zero: Road to Eden. Especially when I’m inspired by a game like XCOM 2, as a developer I must somehow notice this aspect, right? Nevertheless, Mutant Year Zero: Road to Eden for 20 hours challenged me a lot and entertained me damn well. For me one of the funniest strategy games of the year! 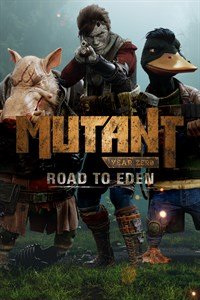