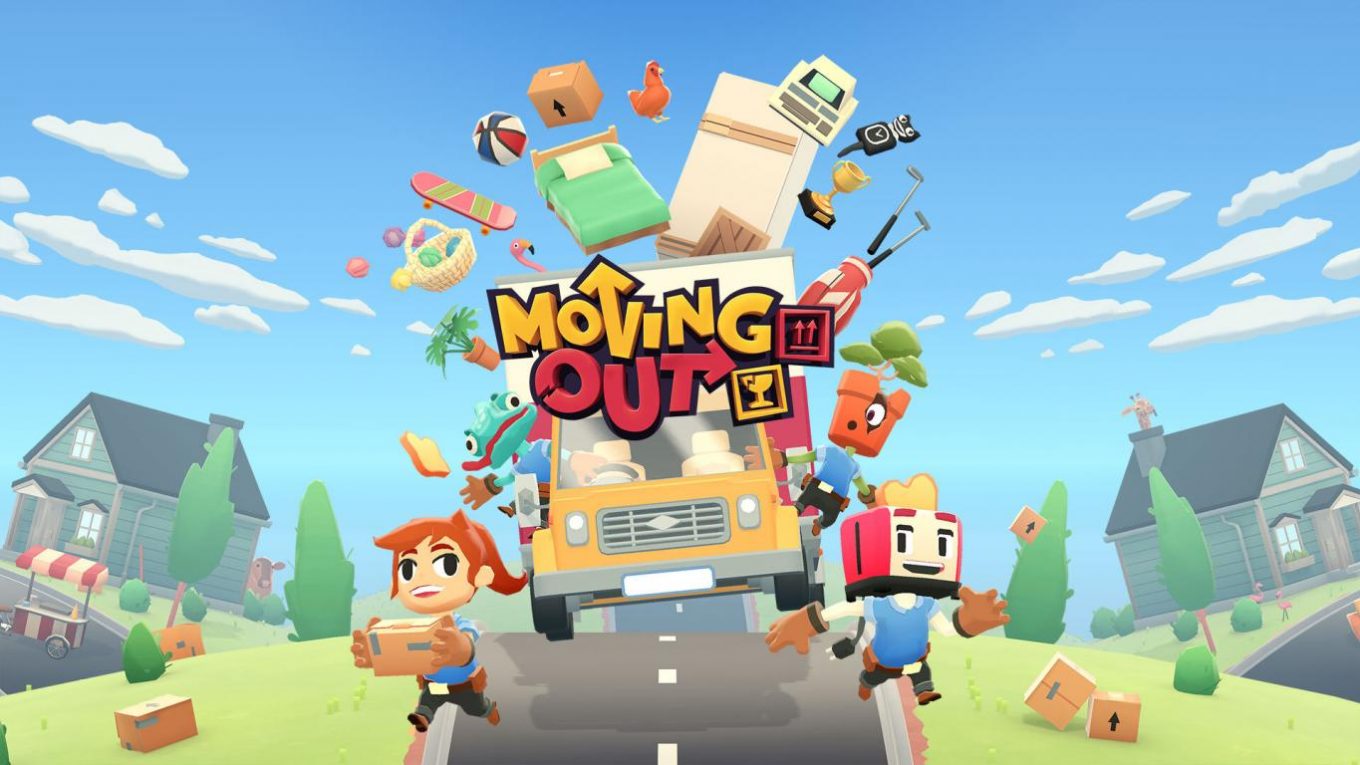 Destroyed vases, broken window glasses and a over the Pool flying piano? All this and much more is promised Moving Out – the new Co-op the work of the Overcooked-Studios, Team 17. We had the Chance, the chaotic relocation of the simulator prior to Release on the 28. April test. Can convince the Chaos instead of in the kitchen, even when moving?

Don’t worry – the client has signed a waiver!

Moving Out is a colorful parade adventure, for fun Co-op rounds with up to four players on the Couch at home is designed. Moving Out is based here – despite a new team of developers in the back – in many ways, of the great Hit Overcooked, which is the publisher of Team 17 in August 2016 appeared, and in 2018, a continuation with Overcooked 2 received. The offshoot belonging to today’s most popular Co-op Games the market has to offer. For me, it was immediately clear: as a long – Overcooked-Fan I need to also Moving Out to pay a visit. Moving Out is now again created a masterpiece – because this time we lay waste to not only the kitchen, but just the whole plot!

The representative of the relocation services “Smooth Moves” finally act in the case of all orders carefully according to the Motto: “don’t worry, the customer has signed a waiver!”. As employees, we go – to the chagrin of our customers – everything else is as careful with valuable property, while we have this on our moving vans cart. We slipped into the shoes of creative characters, like a chameleon, a Ramen-changing Portion of noodles, a sprint potted plant, or a Toaster that spits out regular waffles ends. To convince the characters to know in the loving design is complete, and spells from the first second of the game put a Smile on the lips.

To a certain degree, the characters can be adapted, this time even a little and you share so, for example, between the minds, body, or wheelchair select. The possibilities here are rather limited. Since the characters are generally fun and varied, is not this here, but too much weight. Some more options would still have been nice! 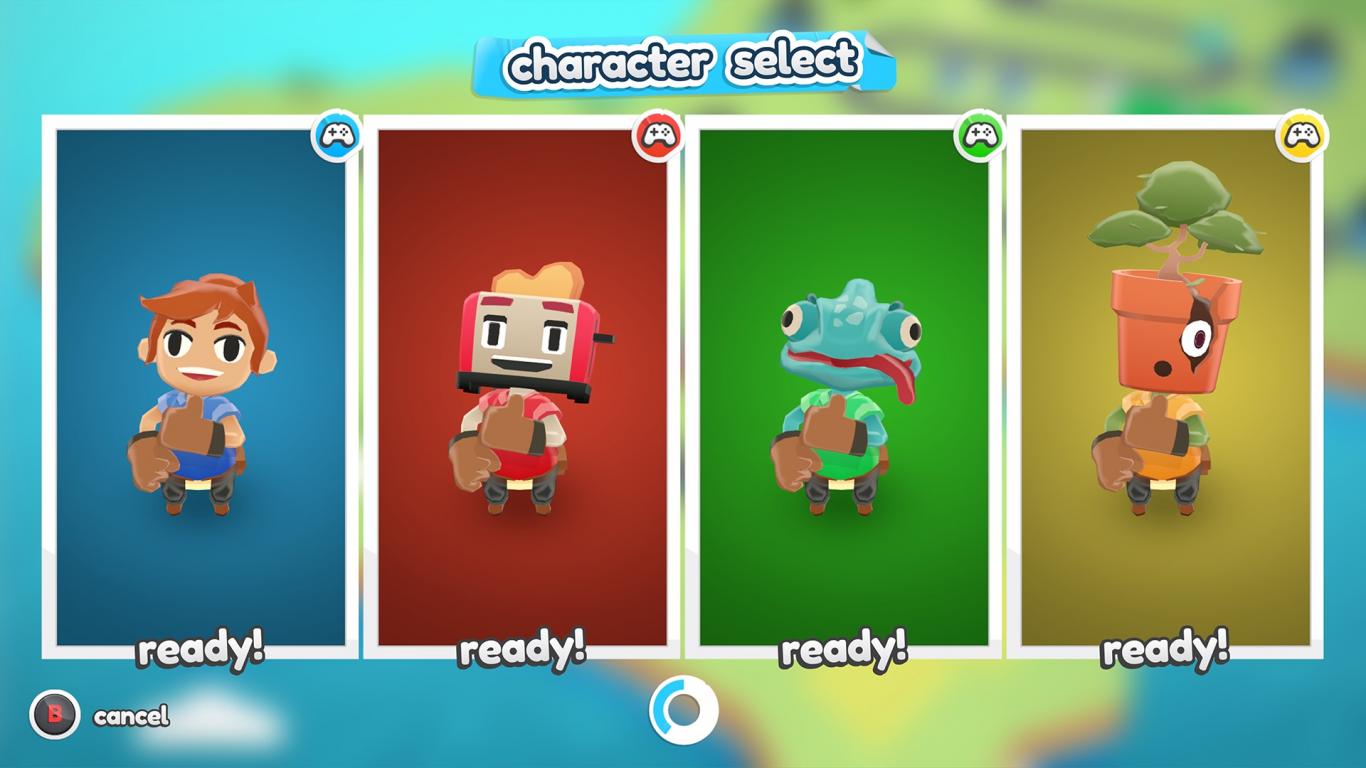 The specialists of “Smooth Moves” at any time for orders on the spot!

Merry Destroy thanks to the physics

At the beginning of the game it is the personal favorite, and promptly receives a first training for the future Job as a moving helper. In the process, I learned how to walk, things, lifts, jumps, pieces of furniture throws, and Sundry pieces of furniture of the colleagues begins. Another important ability: the possible opponents – or allies – to miss a slap in the face (… what happened to us at friends, of course nieee.. *cough*). Already in the Tutorial, it showed: even if Moving Out alone is playable, it is in the entire line is designed, chaotic hours together with friends to spend. That’s why I ordered so just my friend to help me extensively during Testing, and to bring together the Chaos in the city “pack more”.

And we really had a lot of fun – because after the Tutorial we were thrown in the first orders into the icy water. The aim was always to create any marked furniture as quickly as possible on the provided moving vans. Depending on your own speed, you will receive either a Bronze, silver or Gold medal. On our adventure to the various environments expected of us then. We met a huge Scary mansion in which we pianos of the haunted and ghosts have been hunted. Single-family homes, which were guarded by aggressive turtles. On a loading of the wing of an aircraft on a moving car. Or even properties far out in space! The nearly 50-Level, which to us in Moving Out, expected, took, always, always more and more difficulty, and it was always against the physics to prove himself.

Graphically, the Level of knowledge to convince the definitely mainly as a result of such change. The Sound in the Background is from the first second gripping and underlines the feeling of time pressure. At the same time, it fits well in the environment, and emphasises it with a really appealing Sound effects – for example, in the haunted houses. Believe me: seldom, it was so stressful and at the same time amusing, to escape from a haunted piano! A little more variety I would have hoped but, nevertheless, because some of the levels sound the same but completely. 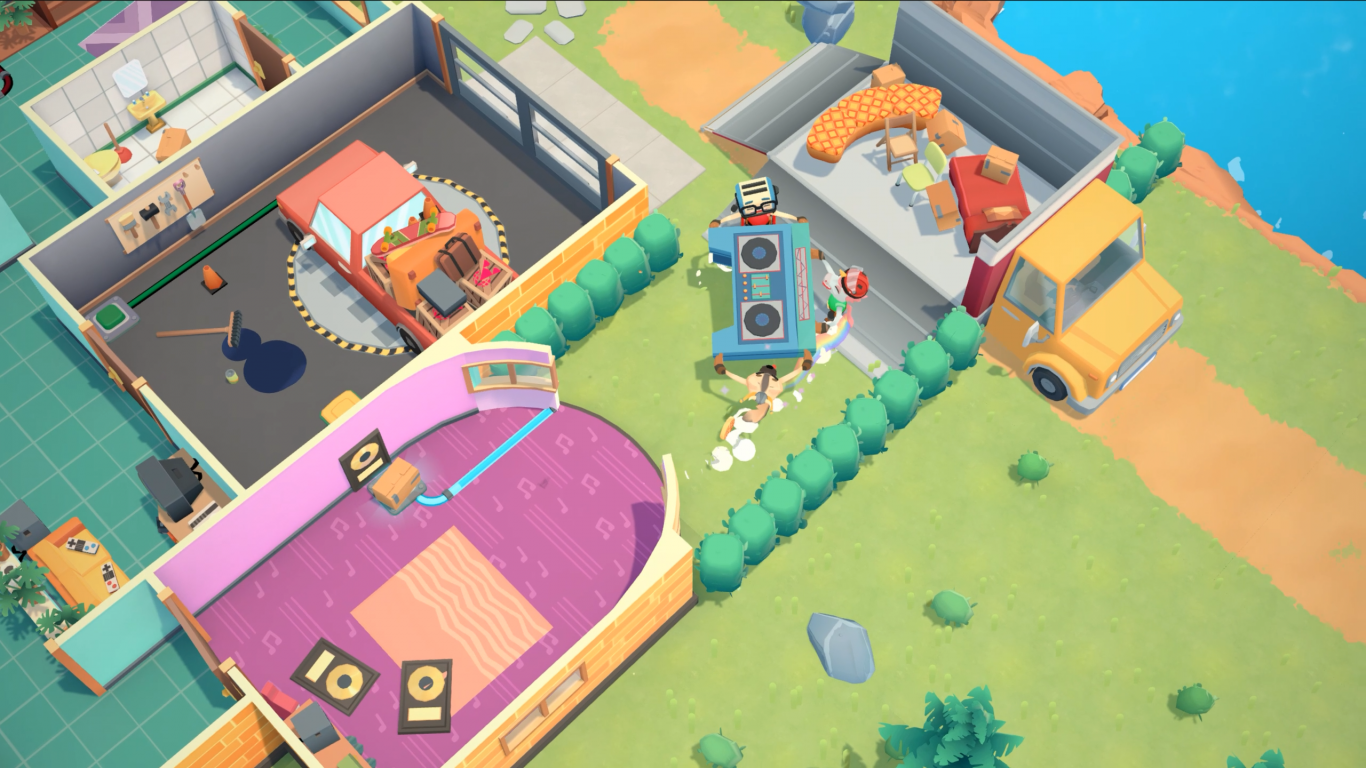 It applies to all time, to create as quickly as possible the inner life of the house to the moving van.

Furniture pack with some of the hardest to control

By and Large succeeded in Moving Out of an intuitive and easy-to-learn controls to create what is, however, a serious Problem included: the litter control in the case of the individual objects. This was rather tricky and worked with us only every other Time felt like they should be. The Throwing of objects is, however, Moving Out is a essential function in each Level, usually multiple times will be required and also is actually one of the Highlights in the virtual cooperation should represent. Here, an object is to be lifted alone or together with a cross-hair determines where you want to throw in the towel.

Here we met with our fun round, however, to some problems. It was not always possible to determine the exact position of the objects. The cross-hairs from fort moved, and after the positioning is still uncontrolled in the selected Position. So the piano landed sometimes in spite of, actually, good aim is a prerequisite anyway in the Pool. Hmm. Well. We had not presented moving experts us – despite a disclaimer – actually!

At the same time, it was partially very difficult, to throw to second. Because the object needs to be lifted to carefully selected sites, high – – so said the piano to the two short sides. This does not, however, each Level-Layout properly. Often you have to vacate first, other things awkward out of the way to get to the desired pages. Valuable time is lost of course. Also the throw itself was not necessarily easier. Because the heavier the object, the more it together in front of the Throw “to get momentum”. All Involved must, however, move your joystick exactly in the same way, back and forth. The controls felt too sensitive, and for us this was rather bad. So many fragile landed Good times Often against the wall, rather than fly through the target window. The provided after some time for Frustration! 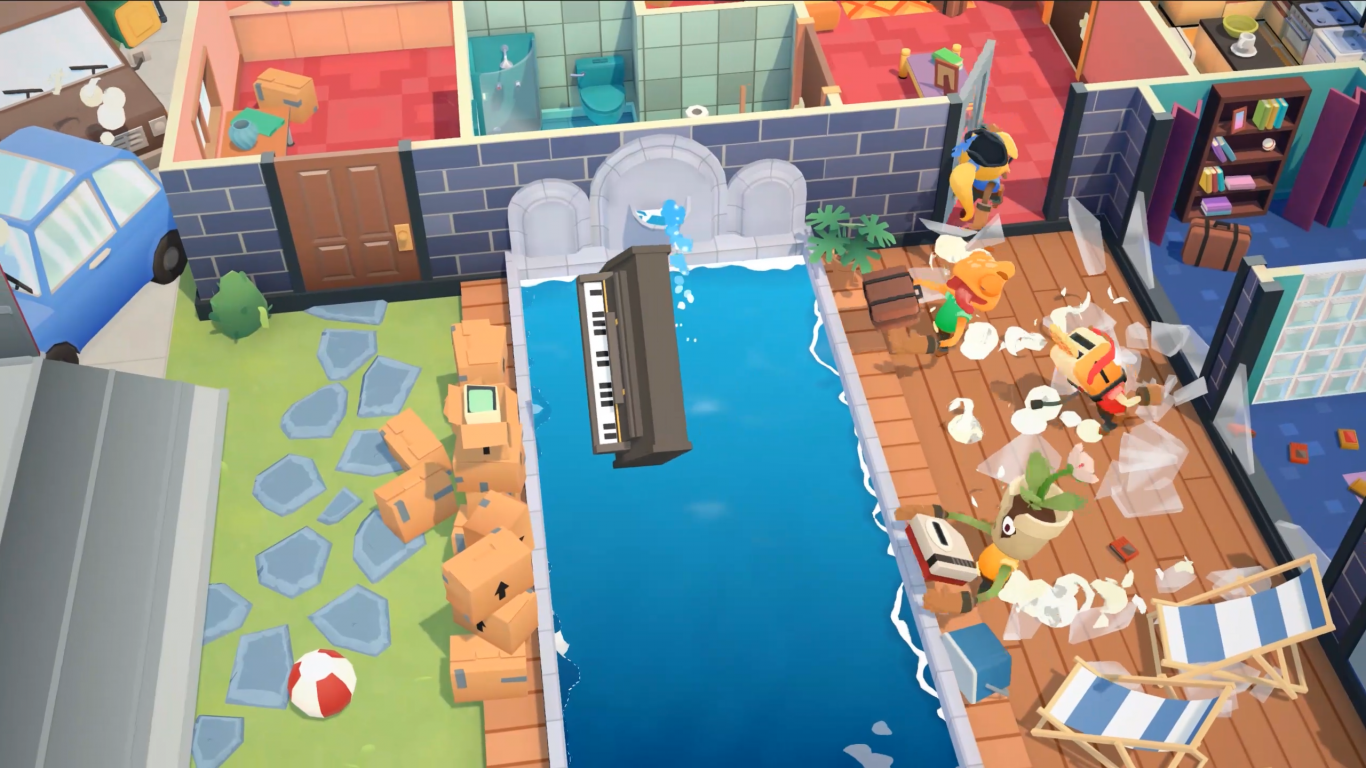 Unfortunately, the fun does not always go as planned – this diminished the fun of the game.

Another are old after every successful Level completion of three bonus objectives to unlock them. These are intended to create incentives for people to visit a Level multiple times and to meet the new missions. In my eyes, the goals were compiled in the process, really colorful and varied. So talk to basically every player type. They range from “destroy all the Windows,” about “Locke the aggressive turtle in the move the Transporter”, to “Throw in the garden in the Baseball-basket”.

Thus they offer a wide variety of goals: to destroy if now, as much as possible, to integrate unusual things in the brief amount of time, or time to try anything almost to make the move broken. Specifically, the last bonus objectives made me, unfortunately, less fun – and I love it so much Chaos around me, to spread and even the last window with my changing Toaster to crash! However, I am still grateful for the fact that the variety is given here, because there are certainly enough players who love the challenge to destroy as little things as possible. The balancing act is here, so Team 17 definitely well done!

Moving Out offers the same fun-filled approach as the games of the Overcooked-series. Especially in times that captivate us on the couch, this is more than welcome. The levels are varied, very creatively designed and offer different challenges. Graphics and Sound are convincing. The characters were designed wonderfully funny, and it just brings more fun than expected, to nozzles as a Toaster through the apartment and to distribute everywhere charred waffles out of my head. This escalates the cooperation is also very fast in an absolute mess – and that is precisely the charm of Moving Out makes.

The tricky control in the area of throwing introduced me to but facing some problems. So unfolded Moving Out , unfortunately, is not the Potential of what I would have expected. It is difficult to describe, but lacked the game is simply that certain Something, which is Overcooked definitely had – and I think that this is for me very much with the difficulties in the control was. I very much hope that a possible Patch after the release of the game creates in some way. Should be screwed to something at the target accuracy, I would imagine, rather, again, to “pack more” to return. Until then, my game-Motivation because of the potential for Frustration is rather low.