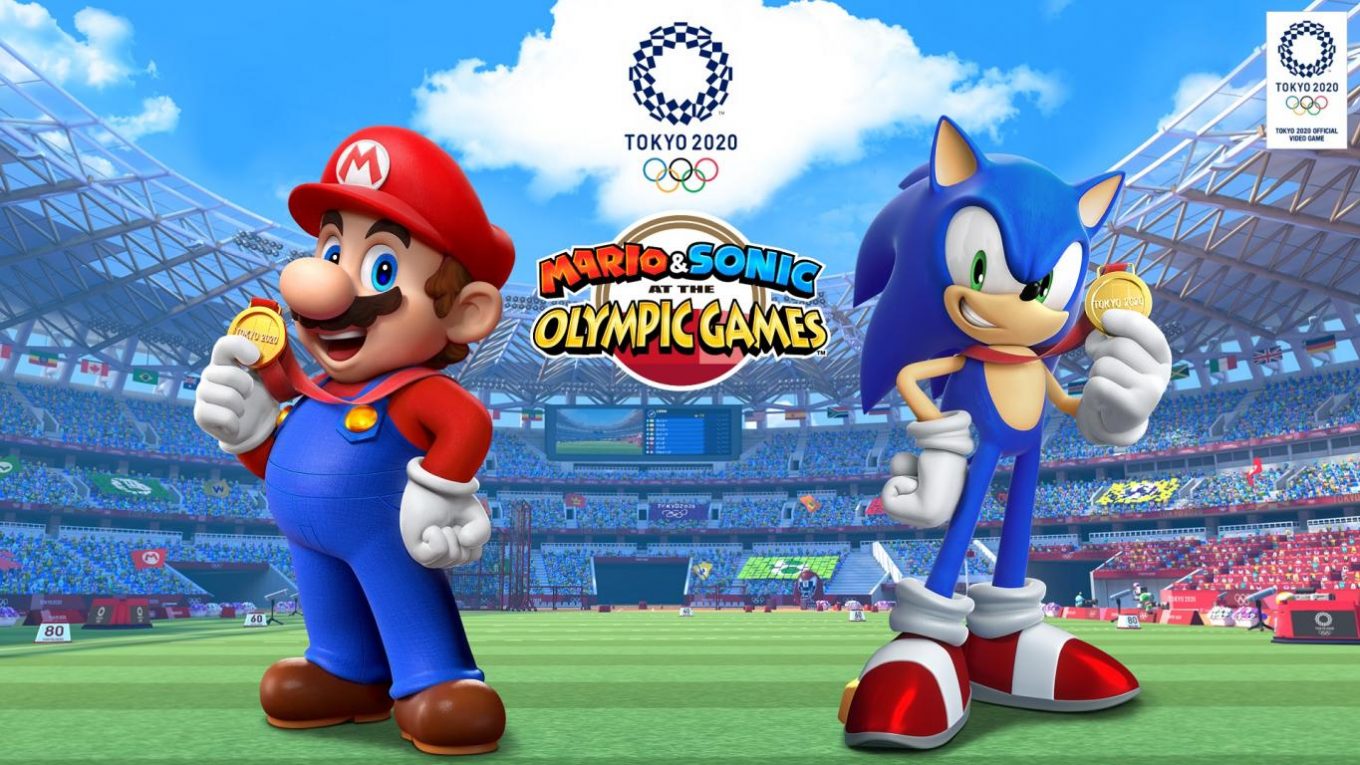 After Mario and Sonic games, due to licensing issues at the last winter Olympics in Pyeongchang break had to do, sweeping the two for the current summer games again in old Freshness. In Mario & Sonic at the Olympic Games: Tokyo 2020 even exclusive only for the Nintendo Switch.

It is not the first Time that Tokyo is the venue for the summer games, because the games of the XVIII Olympiad in 1964, the Japanese capital held and this fact also provides the basis for the story mode of Mario & Sonic at the Olympic Games: Tokyo 2020. Bowser and Dr. Eggman have created a Retro-console, which is to keep the two title heroes in the virtual world of “Tokyo 64” one eyes and caught there. Because the Whole does not work as planned, will also be ported to the two villains back to the Olympic Games in Tokyo in 1964 tele. From here, the story runs on two parallel time planes: While Luigi, Tails, and Co in the year 2020, the friends from the retro to try to save the console, follow Mario, Sonic and their counterparties a Plan of his own. Dr. Eggman has built a back door for the return journey in the present, it opens, but only when you win as many gold medals.

The story mode of Mario & Sonic at the Olympic Games: Tokyo 2020 plays it almost like an Action-Adventure. On a very large map to travel to sites in different places as well as various game, talk about it with the numerous characters and puts these in the different sports competitions. Sounds pretty cool and funny, but it is boring and tough due to the very shallow dialogs and long load times. Only the change-over from the Tokyo of the present day in the year 1964, which is then shown in 8 – and 16-Bit look, it loosens up the game to do something. Even the unlockable mini-games, and characters make for a bit of Motivation, but a lot of variety or a very high re-play value, I wouldn’t attest to the story mode at this point for sure. 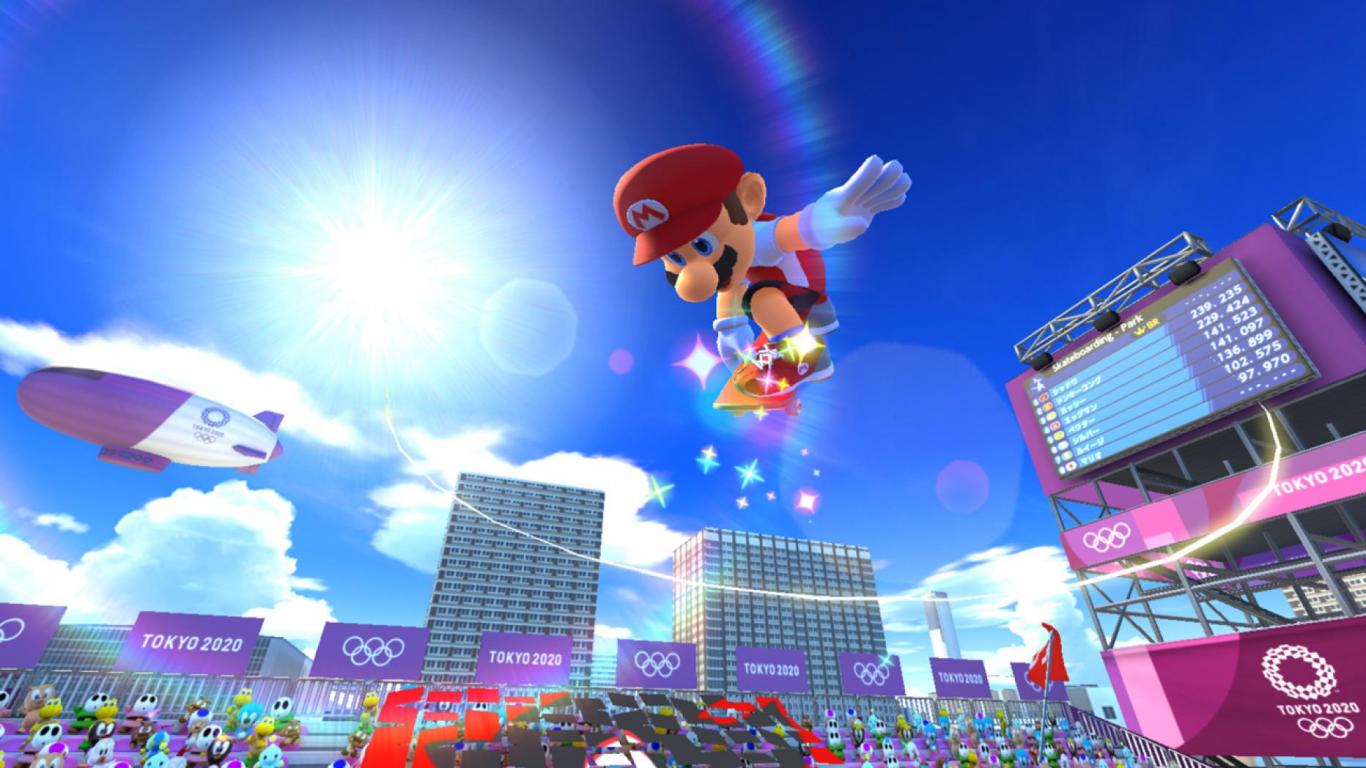 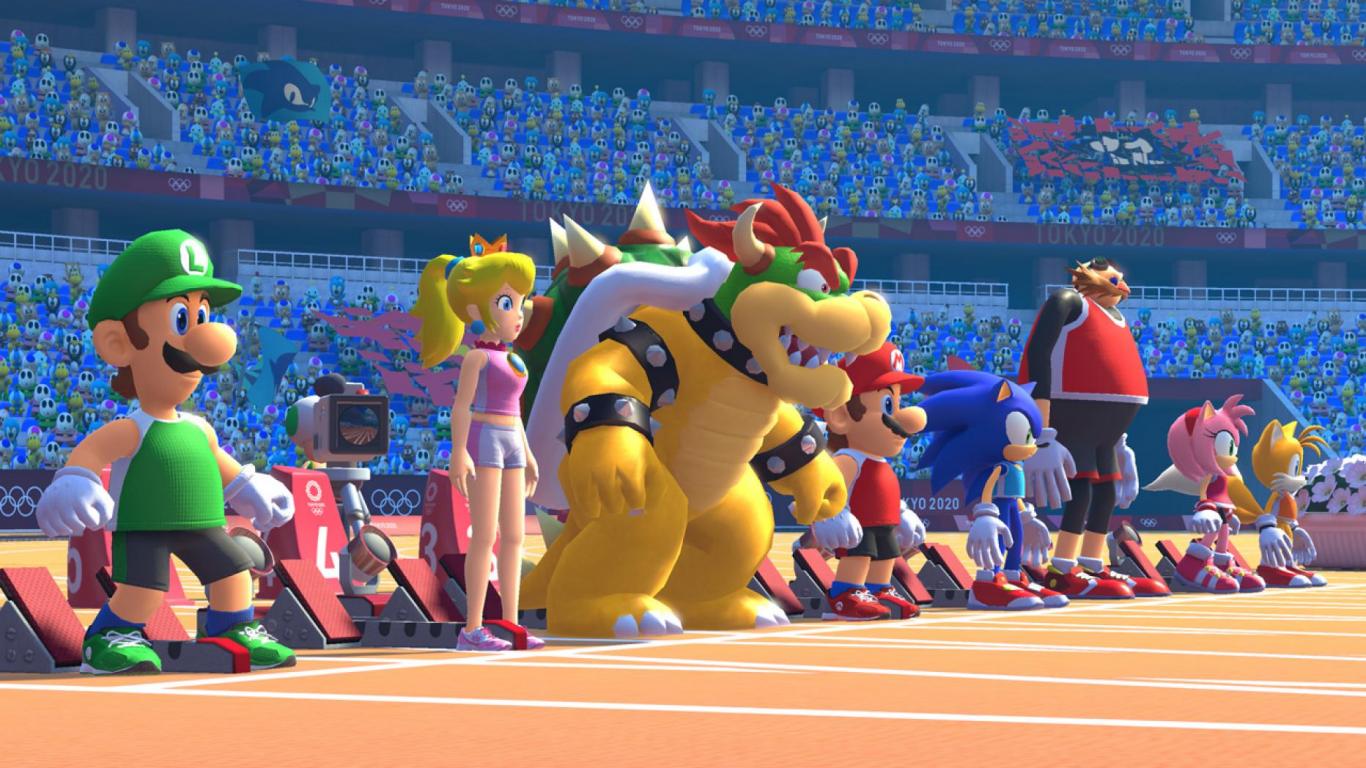 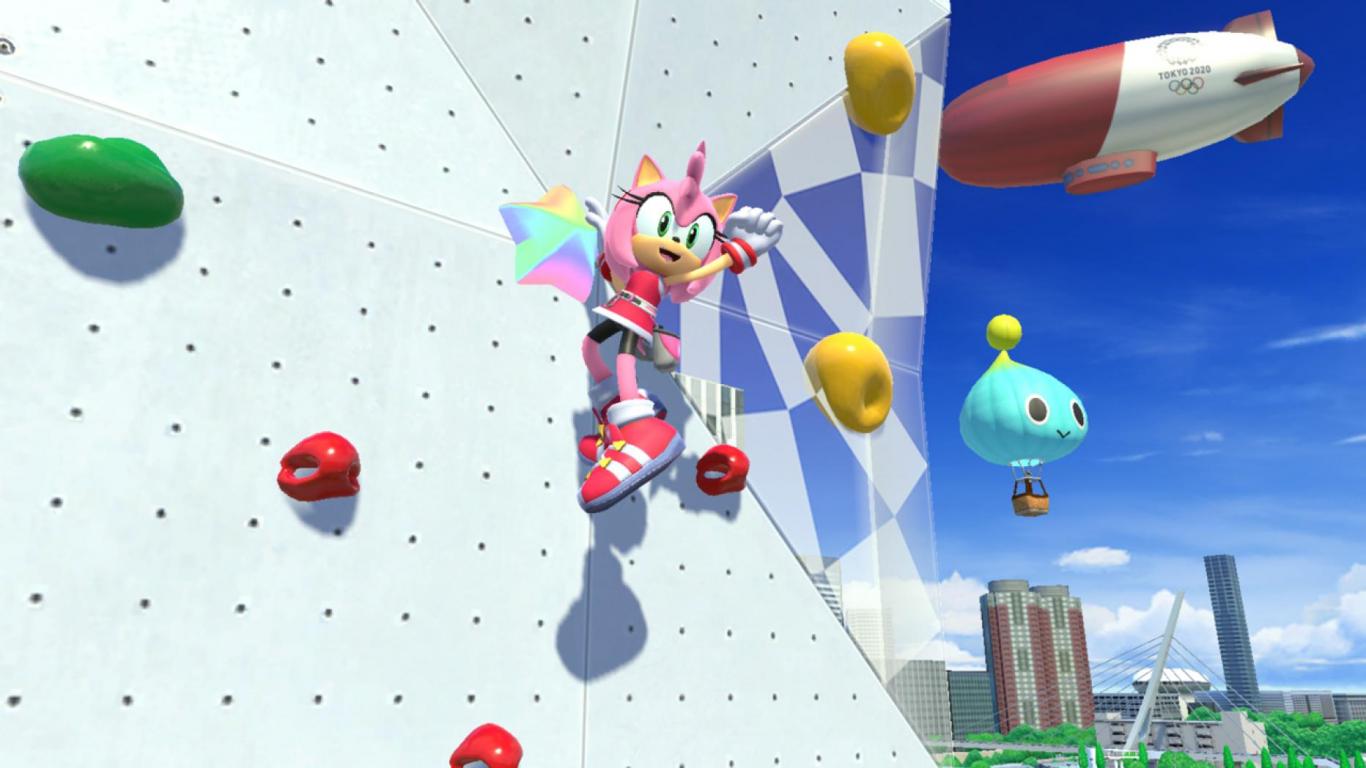 Everything is not always

Mario & Sonic at the Olympic Games: Tokyo 2020 offers a total of over 30 disciplines, and where we have many of them but already from the previous Games are familiar with, such as Rugby, Boxing or fencing. Added whole new sport, but rock climbing, Karate, Surfing and skateboarding. Exactly these four sports are for me the Highlights, and also require a bit more skill than most of the other colleagues. Also new is the a total of ten, in a classic 2D-held versions of the competitions of the Olympic Games in Tokyo in 1964 are. Such as Marathon, shooting, Canoeing, or Volleyball.

The dream of the disciplines to return in Mario & Sonic at the Olympic Games: Tokyo 2020 back. Here you play real Olympic disciplines, which have been expanded to include elements of the Super Mario and Sonic series. Unfortunately, the choice with Shooting, racing, and Karate, somewhat on the lean side is down and also the scope and the playful deep left gear a little to be desired. A tournament mode has been omitted completely. You want to compete around locally or online against up to seven other players, then you can only do that by selecting the different sports separately. This is, of course, a lot of momentum from the Multiplayer mode, and to be motivated in addition to not really, all or at least several of the disciplines to play through. For my taste is missing here is something like the Festival, or even the Co-op mode from Mario & Sonic at the Olympic Winter Games. 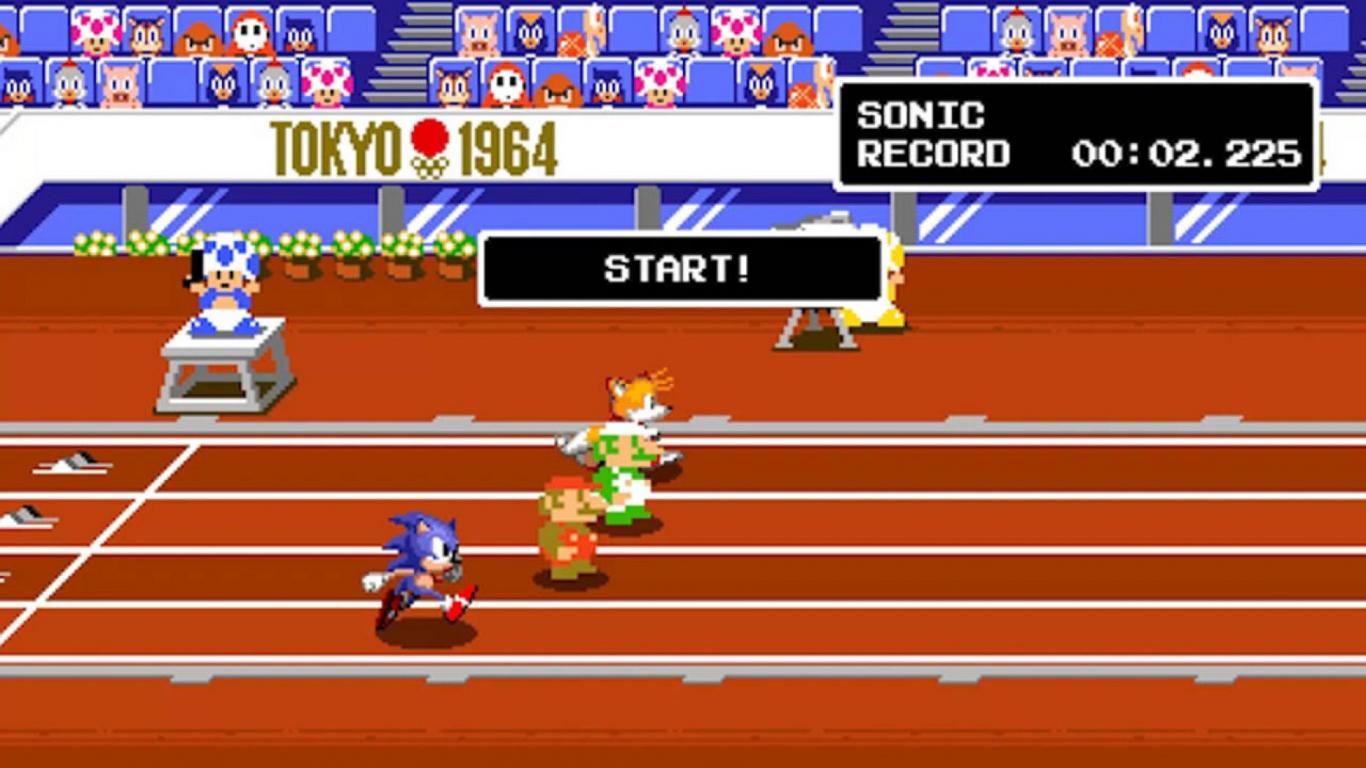 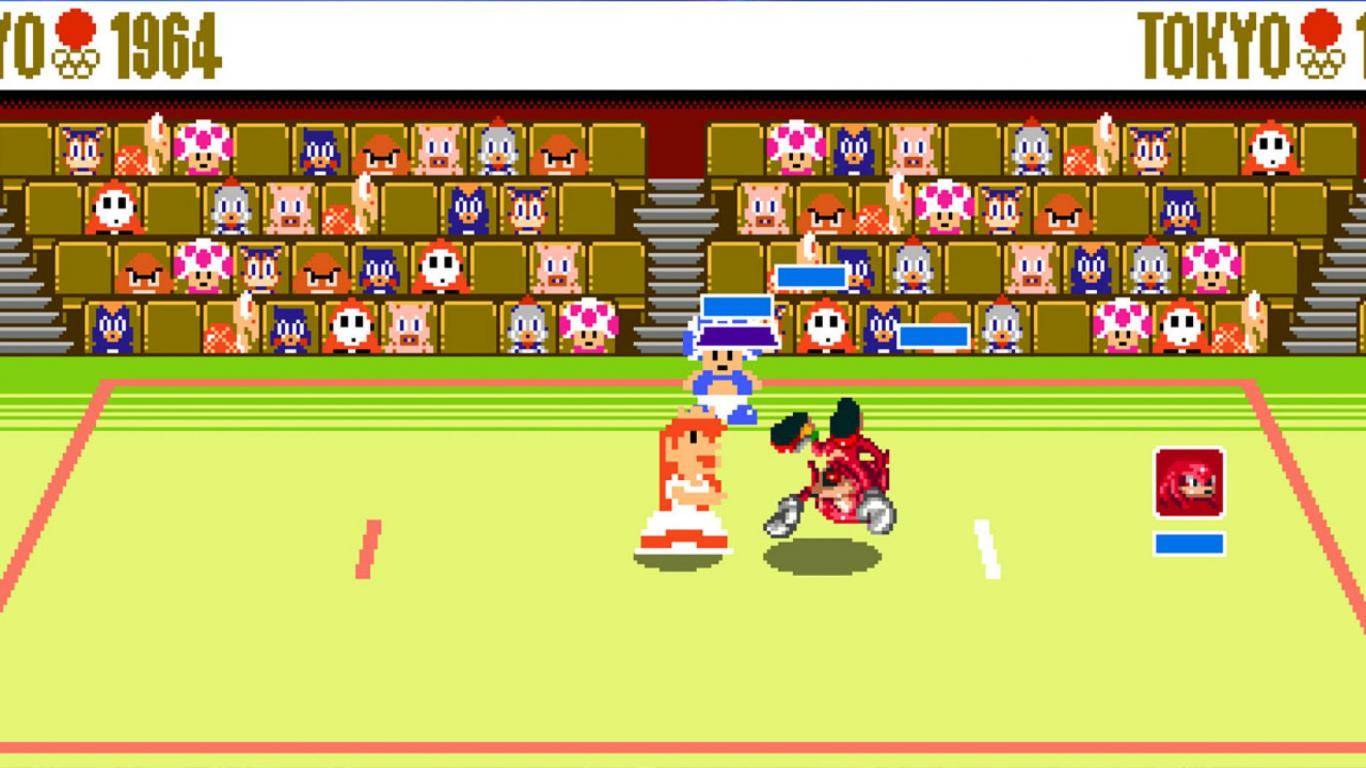 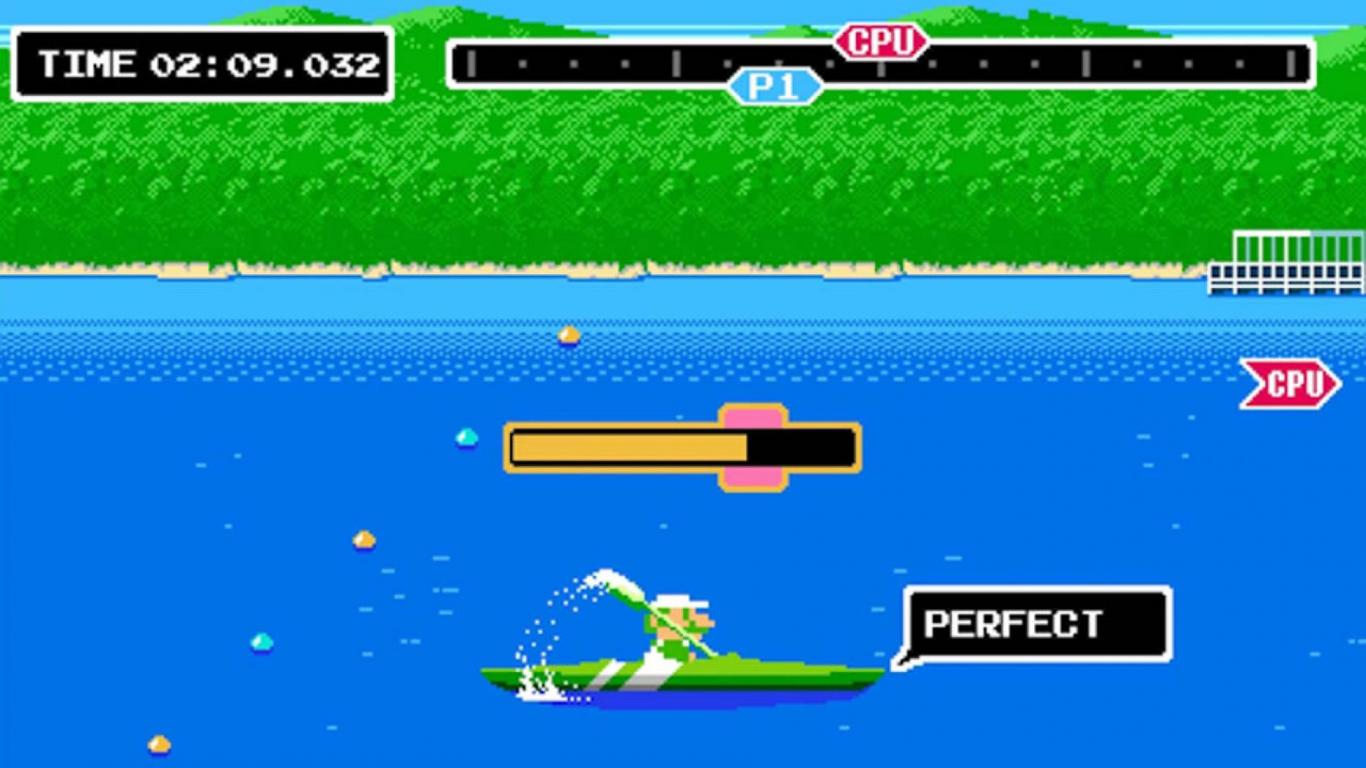 Not everything that shines is Gold

The technical presentation is on the for Mario games the usual high level. In the case of the combination of love, full of 2D Pixel graphics and colorful 3D visuals with great animations and detailed-Scenes developer Sega pulls out visually all of the Register and can iron out the weaknesses in the Storytelling to some extent. Of course, I have not expected it, but I’ve never been so disturbed as in Mario & Sonic at the Olympic Games: Tokyo 2020. I must not travel in the story mode to the numerous sports facilities of Tokyo, just to read there’s a flood of text boxes, I also skip. Because it doesn’t help that the Sound and background music to adapt dynamically and in a large part of the atmospheric sounds from the speakers sound.

What affects the control of each sport can be completed types, either the classic, with Buttons or with motion control. The movement can be explained although always very accurate and are also relatively simple, nevertheless, my preferred choice is always those with the buttons, since this is a little more precise, and no longer training time is required. You want to criticize, but here’s something, but it is exactly this simplicity which bothers me a little. Especially in the case of the Retro-mini-games, the Gameplay is often limited to simple Button mashing, and offers little variety. Here, one could take a model of the Games series from Epyx, this in spite of your age, a far greater challenge is.

The Crossover-sport Mario and Sonic games on the Nintendo Wii, here is the first Mario & Sonic at the Olympic Winter Gamesare my fun multi-player evenings, still at the top of the list, so I had to be the debut of the two mascots on the Switch console, very high expectations. To make it short: This unfortunately will not be fulfilled completely. With a total of 31 disciplines in Mario & Sonic at the Olympic Games: Tokyo 2020 the biggest selection of different kinds of sports, but only a handful of them can also be playful, to convince, how about Karate or rock Climbing. The mini-games themselves are limited to often be mindless Button mashing, and although the Retro approach can meet the playful claim, however, remains largely on track. Soloists should already make a big arc to the game, because even the great basic idea around the Tokyo-64 mode, will not be liable to the victim of the lack of implementation. But also in the great strength of the game series, the local multiplayer mode, fizzles due to the absence of a tournament mode, and the lack of variety. Mario & Sonic at the Olympic Games: Tokyo 2020 gets to me, that’s why the predicate is nice, I personally would but at the next joint games evening go back to the Wii dusting and the older title, or a variety of Retro-Alternative gamble.

What is Mario & Sonic at the Olympic Games: Tokyo 2020? With a total of 31 disciplines of the largest sports-adventures of the two title heroes.
Platforms: Nintendo Switch
Tested On: Nintendo Switch
Developer / Publisher: SEGA
Release: 8. November 2019
Link: Official Website