A few years ago, is the Kickstarter-funded Indie game by the name of Lost Ember announced been. 22. November 2019, it was finally time and the debut of the German game forge Mooneye Studios has been released. The concept, to slip into the skin of various animals, and to discover the world, had me hook from the beginning on. And so I was curious if the finished game would pull me in its spell.

In the culture of the Yanrana, wanders the soul of the people, if you follow the customs, in the city of light. However, it was not a ‘good’ Person, the soul is trapped in a animal body. The game begins with a nameless soul, as a flying ball of light represented, which is supposed to dwell in the Beyond the Yanrana, but somehow in a red dome is trapped. The animals of the forests and meadows can help the little flying soul don’t call understand and not the way. Only a single she-wolf seems to have an open ear for this. The soul immediately feels responsible, the she-wolf, which seems obviously to be one of the lost souls, to take in the city of light, because everyone deserves a second Chance. So the two set out on the path and learn on your trip to more about yourself than you would have thought at the beginning. 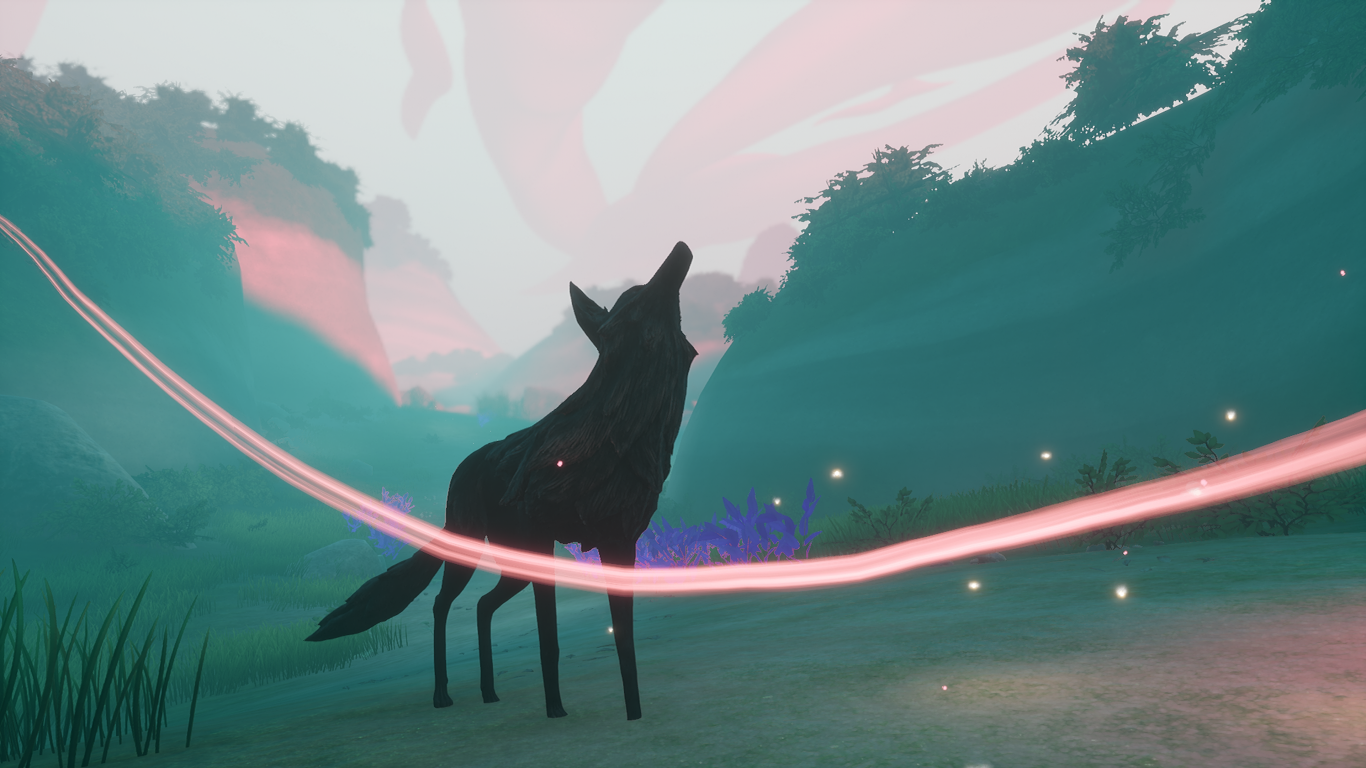 In Lost Ember, her slips into the skin of a wolf, to be led by a soul in the city of light.

Free as a bird

Our she-wolf has an extraordinary ability, because you can slip into the bodies of other animals. Whether Wombat, Hummingbird, fish, or – and now you hold baby ducks, it is definitely a change! The surrounding area offers a wide variety of animals, whose skills you can use to your advantage. So it certain areas you can only reach by narrow cracks, or the way a Wombat Tunnel. The control is very intuitive, who would, however, prefer an inverted camera, this can change in the settings. In the game world various relics and mushrooms to be found are also. This will tell you a little more about the culture of the Yanrana. Spearheads, fish-hooks, or even Easter Eggs, like a Pokeball or Triforce, are distributed in the game world.

The items are well hidden and make it so that you want to explore the already inviting, beautifully designed environments, yet precise. The relics of shimmer and are surrounded by a beam of light and to catch a glimpse of slightly. To find all the mushrooms, is proving a little more difficult, because these are hidden with no special identifying features in the environment. In the Chapter overview, you can at any time check the number of the relics, and mushrooms to find would have been. And now, let’s be honest, who’s can’t fly ever desire to? In Lost Ember you can to your heart’s content by the area of the flap, if your on a winged companions meet. My favorite: clearly the nimble Hummingbird, with you to achieve lofty heights. You should find at first glance, there is no available animal, so you can get the the shoulder button to focus – I call it lovingly Witcher-Sense (let’s play, after all, a Wolf) and there are small points of light that draw the living creature characteristic to appear. Some animals also have small activities. Wombats can, for example, lying around berries to Munch on, so tried in any case, the keys on the cross control when you play!!! 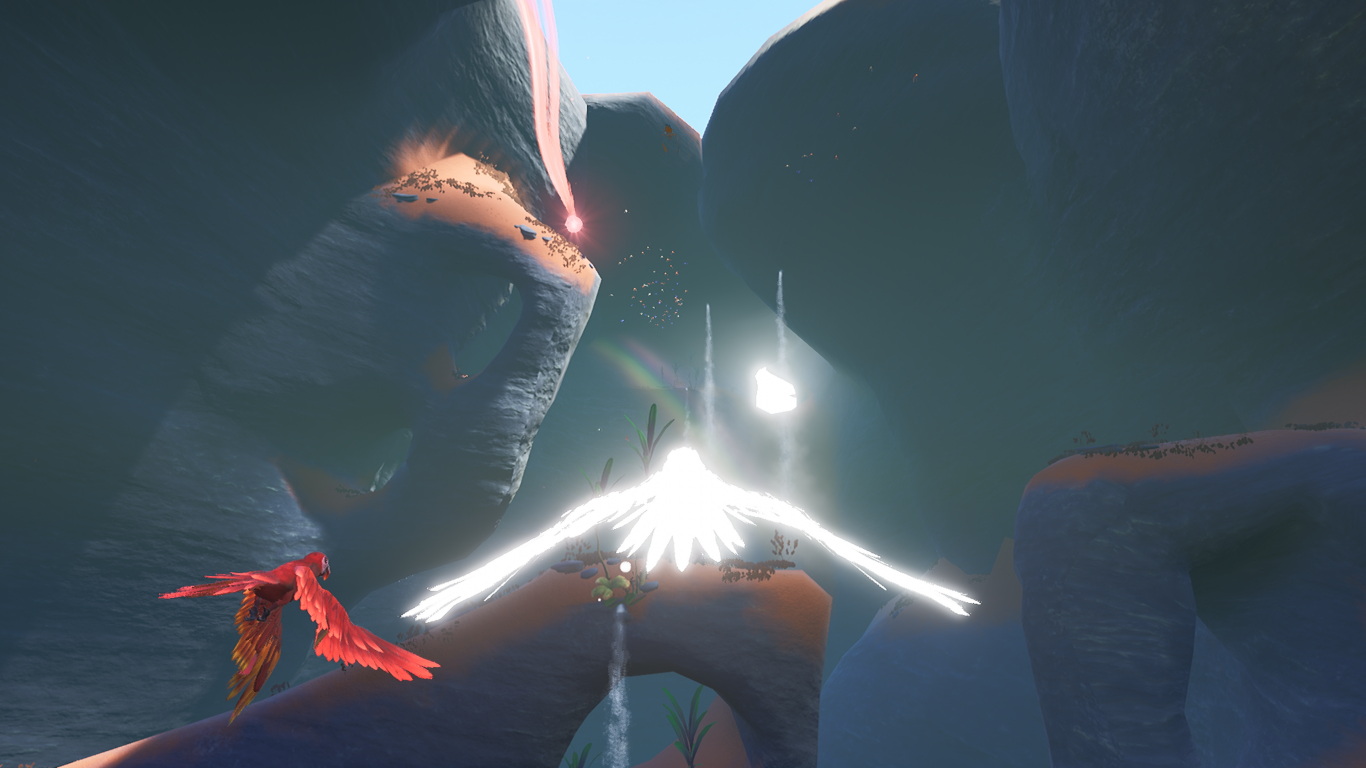 Some of the legendary animals, which are white, are waiting to be discovered by you!

On the way to the city of light, you will always find memories that reveal more about the she-wolf. And it’s not good for the heart and soul of this, because some unpleasant things happened. Through the Experience of memories, you can expand the you narrowing dome, again and again and so on your path more to come. From the distance you can see the memory points, as they look a little like a camp fire, and red vapor is rising up. While Exploring this, appear statues that hint at the story, at key points in the story it comes to minimalist Cutscenes, in which silhouettes perform set-up dialogues. The setting is in both German and English voice output turned out well, the speakers have noticeably effort, their emotions so well, we admit possible and the characters to life. The animations of the scenes of a Stop Motion and, despite the minimalism, very artistic and atmospheric failed. The great atmosphere is by the way also be attributed to a large part of the Soundtrack, the feeling the painting. Music and Sound come from the pen of Craig Conner, among other things, the Music Director of the entire GTAseries is and Will Morton, the for Rockstar North was working.

The Lost Ember is a magical story in which I cheer him, surprised to have been and in the end shed some tears I have. Mooneye Studios has a lot of heart and soul into your project plugged in and that you feel in every Moment of the game. The journey of the two souls is heart-warming, philosophical and is at no time boring. In General, if you want it to be because the game in about 3 hours, but the many hidden secrets and the charming atmosphere, let a in the world to sink and the world around you forget to. Lost Ember has become an absolutely unique Trip and has only a small Problem that I have to complain about. After the automatic memory process, which is indicated by a small icon at the lower corner of the screen, it comes to brief drops in frame rate, once it even came to a total crash of the game. After the Update to Version 1.16 it comes to significantly less stuttering and a crash is not occurred. A small minus point I can get over for me personally absolutely. 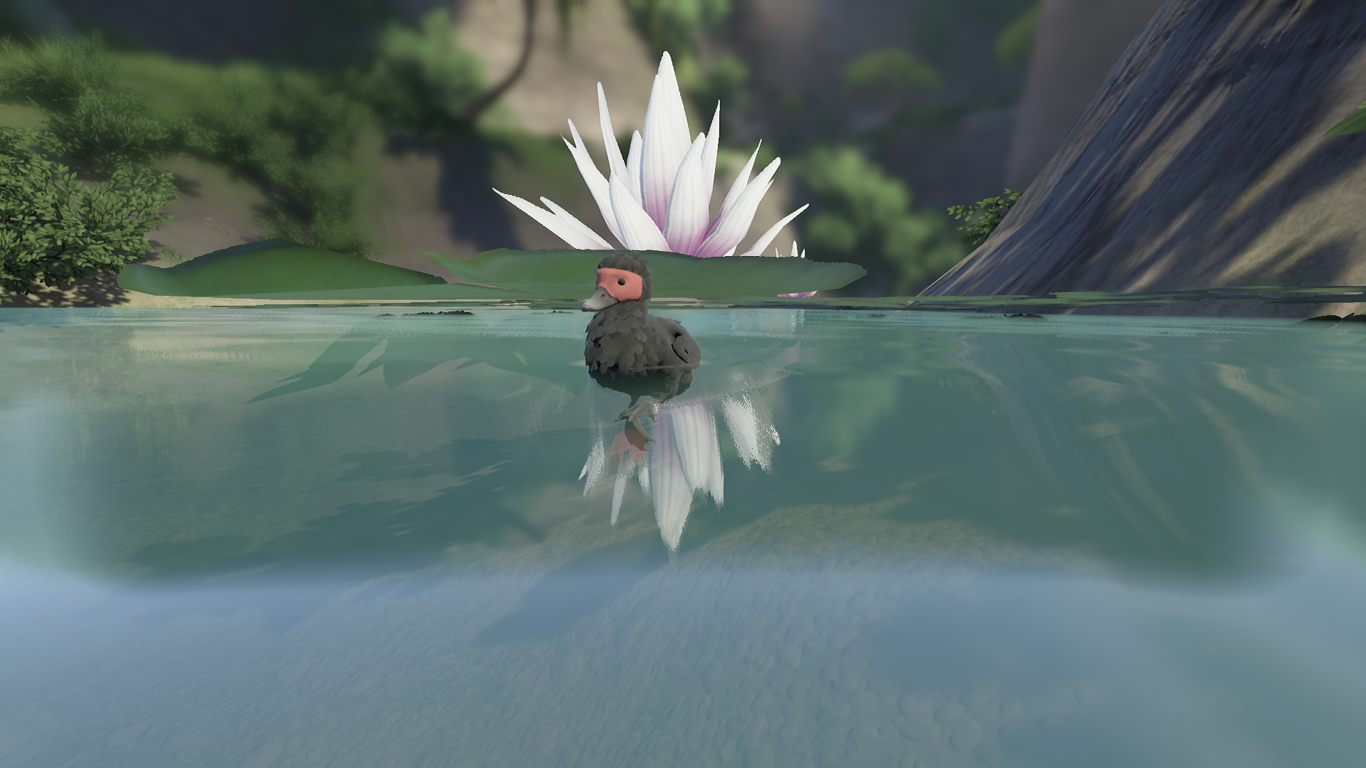 One of the things in my life, which I didn’t know that I need you: As a baby duck through the water paddling!

There are certain Trailer, which you already know, this is the game for you. And as I slipped into the skin of the wolf and the first steps I walked, I knew, this is love at first sight. Definitively me, it was then when I discovered that I can paddle as a Baby duck by the lake – Cuteness Overload! Action fans will be here, maybe not find what you need, but Fans of Indie titles like Journey or Spirit of the North will be your pure joy. A VR-mode is currently in the planning stage, via Update later will come (on the HTC Vive and the Oculus Rift has already been tested, also the PlayStation later with VR to be supplied) – we will of course inform you as soon as we know more, because I can mode wait! And to wish since it is soon Christmas, dear Santa, for Christmas I me a photo mode to the beauty of the world better catch! The Lost Ember is my personal Game of the Year 2019 and has a place for eternity in my heart secured. Imagine a Standing Ovation, because I’m excited!

What is Lost Ember is? Animal Indie Adventure game, where your in the skin of various creatures, you can hatch
Platforms: PC, PS4, XBox One, Nintendo Switch (Release 1. Quarter of 2020)
Tested on: PS4 Pro
Developer / Publisher: Mooneye Studios
Release: 22.November 2019
Link: Official Website