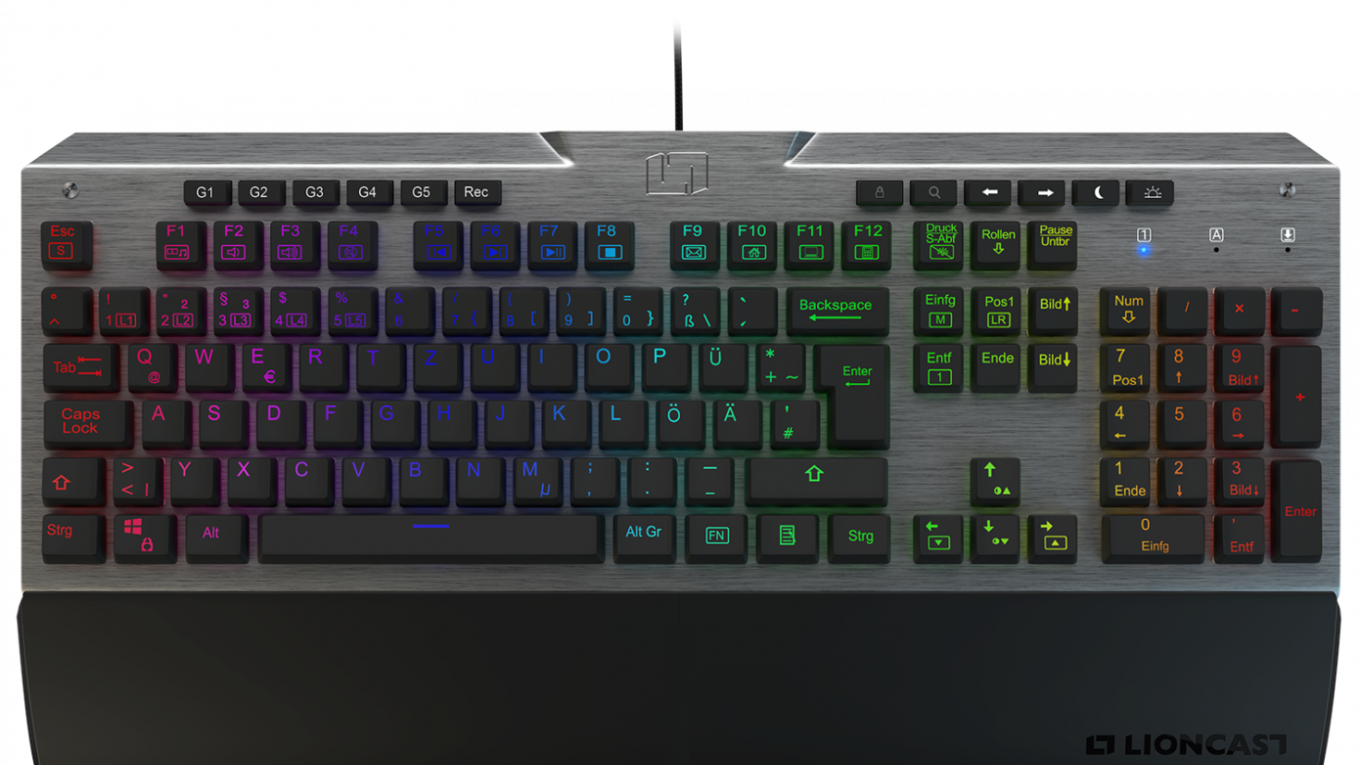 Last year, Lioncast’s hardware specialists convinced us with their LK300 RGB gaming keyboard. With the new LK300 PRO keyboard, the Berlin experts for gaming peripherals are now releasing the successor model, which according to the manufacturer is even more geared to the needs of professional e-athletes and frequent writers. We have tested whether the new features really bring the promised improvements.

We didn’t find much to criticize in our test of the Lioncast LK300 RGB Gaming Keyboard until a few minor flaws, such as the volume of the keystrokes or the somewhat cumbersome operation of the media keys. It is therefore quite understandable that the changes in the successor model are initially only in the details. The design has been adapted slightly in terms of appearance and now looks even more straightforward. Thanks to the high-quality, brushed aluminium surface, it also provides a simple but at the same time very elegant look. The back is made of plastic and like the predecessor, large rubber surfaces ensure a firm, secure stand.

An innovation concerns the mechanism for mounting the palm rest on the keyboard. By means of two magnets on the front side it is now very easy to install and can be disconnected from the keyboard just as easily. The surface itself is made of pleasant plastic with good grip, so that the non-slip underlay relieves the wrist perfectly when writing. 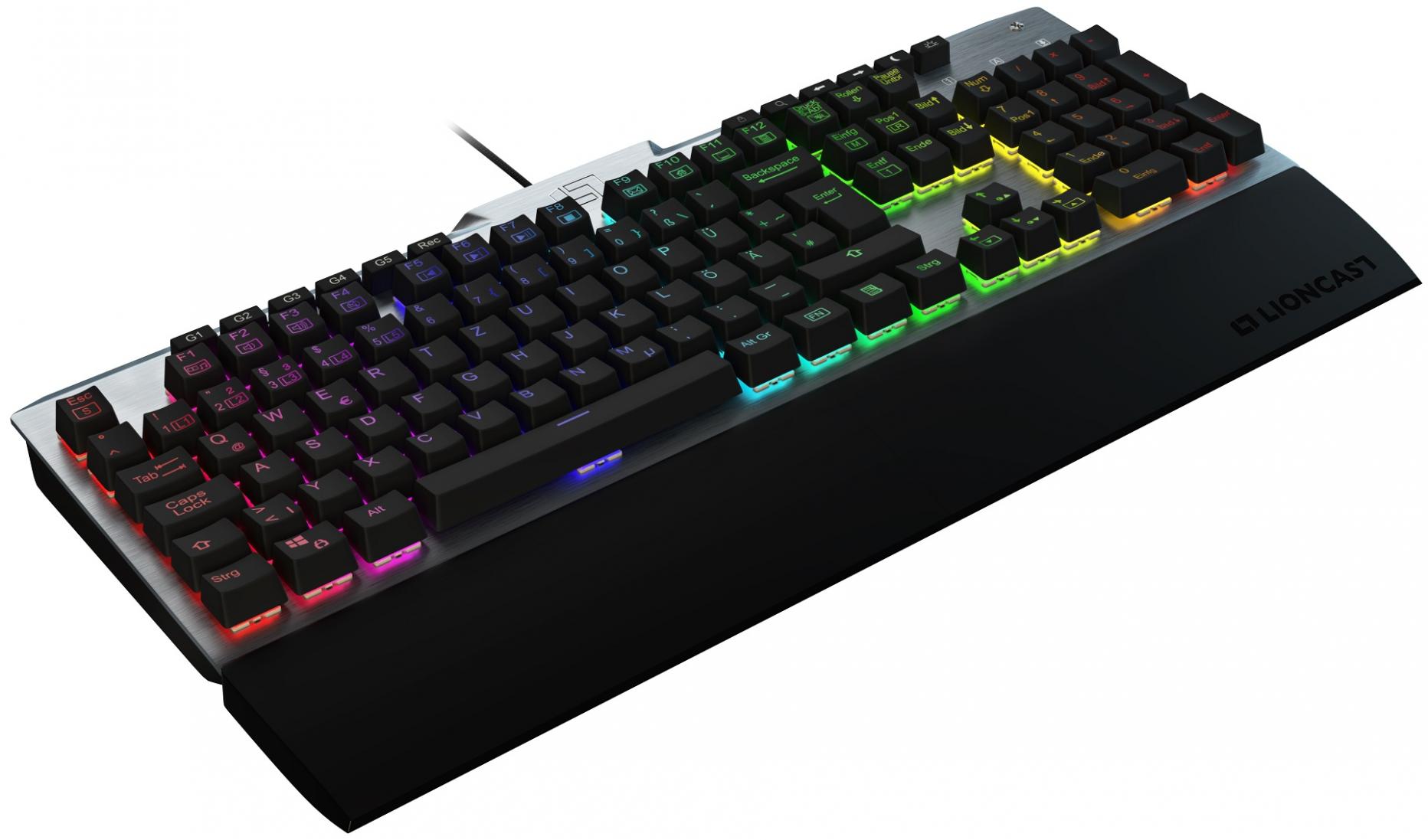 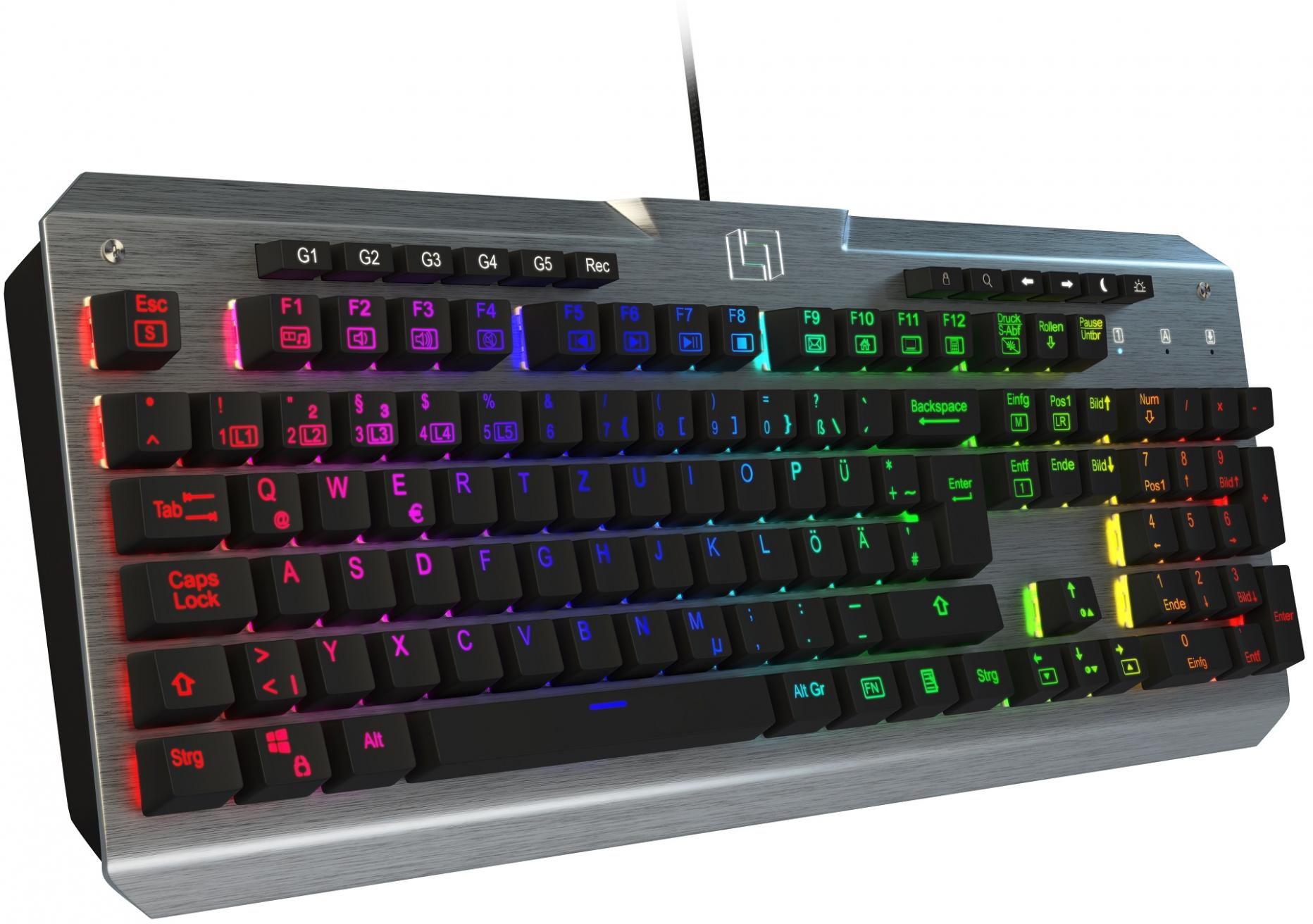 Brown instead of red

The biggest difference between the two LK300 RGB keyboards can be found in the built-in switches, because in the PRO version, instead of the mechanical Kailh Red Switches, the much more popular Cherry MX Brown Switches are now used. Although the tripping resistance is slightly higher at 55 grams (compared to 45-50 grams), there is now a noticeable feedback. In addition to the improved feel, the brown switches have another major advantage: since the classic “click” is missing during operation, they are also significantly quieter than other mechanical variants. Nevertheless, the Lioncast LK300 PRO RGB Gaming Keyboard is still not one of the quietest keyboards due to its aluminum surface.

The keyboard layout corresponds to that of the previous model. On the upper right side there are five keys for macros and six keys for various multimedia functions. Unfortunately, we forgot to improve one of our major criticisms, because you still have to press the “FN” key for certain actions, such as volume control or title selection, which is a bit cumbersome. The macros are stored in the internal memory of the keyboard and are then available on every PC without having to install any additional software 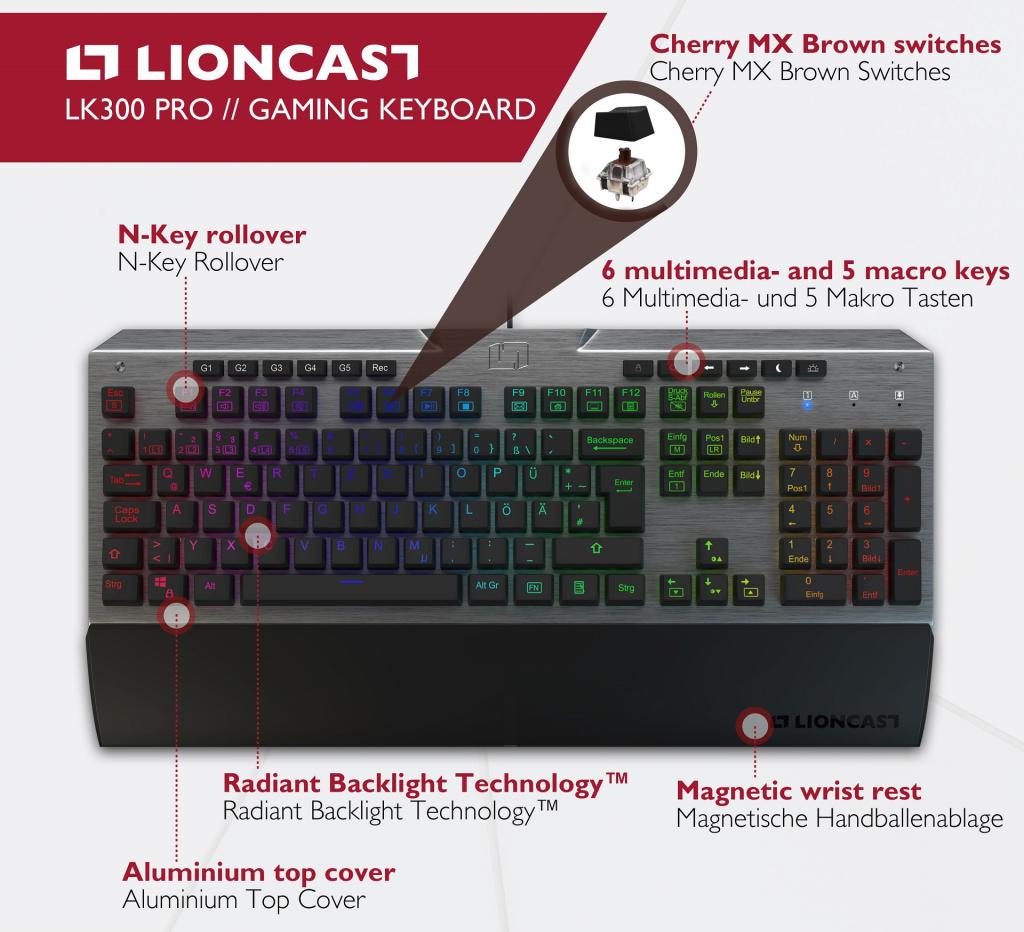 There will be light

A special feature of the LK300 RGB series is the specially developed lighting system , which is of course also used in the PRO version. So it is possible to assign one of about 16.8 million colors to every single key and to save whole profiles for the complete keyboard. Alternatively, one of the 14 predefined color schemes can be selected, ranging from neon streams to rainbows and droplet effects. All nice optical gimmicks, but not really practical – except for the gaming tags. Here certain keys can be highlighted, such as the WASD or arrow keys. A nice feature for players who like to gamble in the dark and still want to have all important buttons in view.

In general, all keys are well illuminated, but the position of the LED’s is somewhat unfavourable, so that the labeling of the secondary functions is not always easy to recognize. With most Keys this hardly matters, only with the numbers I have been annoyed about it often.

For the programming of the macros and the lighting the well-known software is used, which can be downloaded from the official Lioncast website. Despite a simple GUI design, a variety of settings are possible here. For my taste a bit too minimalistic, because many functions are only visible after trying them out and so the program requires a bit more intensive training. Alternatively, it is of course possible to program the keyboard without any software. Here, macros are recorded using certain key combinations or the illumination is changed. For me personally clearly the better and simpler option. 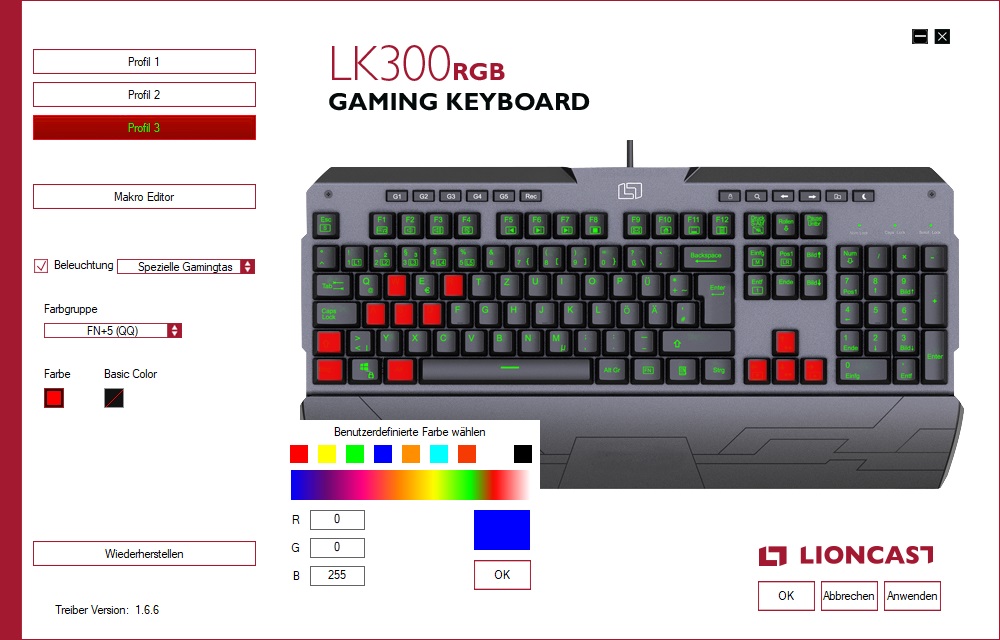 Not only because of the newly installed Cherry MX Brown switches the Lioncast LK300 PRO RGB Gaming Keyboard surpasses its predecessor, also the small improvements, for example in terms of optics and the revised magnetic palm rest, make the keyboard interesting not only for gamers. Lioncast has thus managed to improve a good product even further and even though I still found a few minor points of criticism, I can definitely recommend the keyboard due to its exemplary workmanship and the countless setting options. Those who already own the predecessor model should consider whether the better switches justify a new purchase, because apart from that it doesn’t offer much new. Otherwise, you should invest the few Euros, which the LK300 PRO costs more, in any case, because it is definitely worth it!