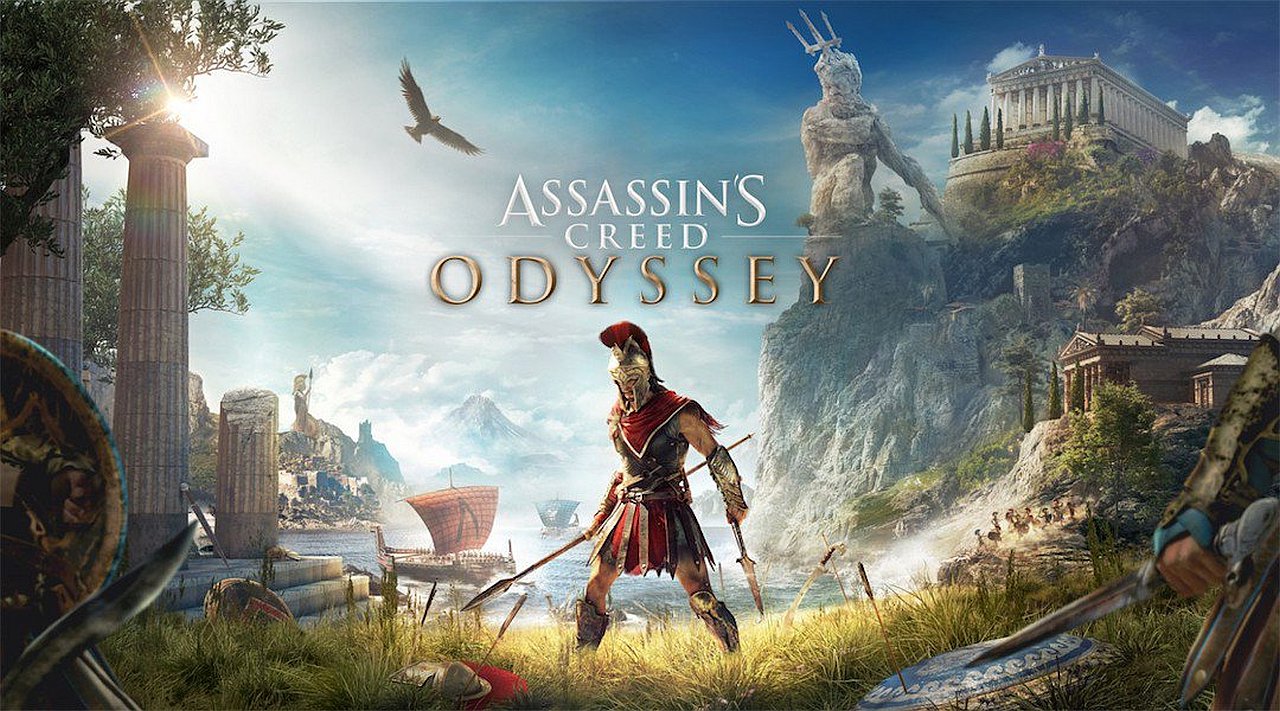 In the meanwhile 10th Assassin’s Creed we go to Greece, in the year 431 B.C.. Cassandra (or Alexios) lives on the small island of Kephallenia and has to fight with bandits and other sly ears together with eagle Ikaros – until a mysterious stranger orders her/ him to kill a Spartan commander against a nice sum of drachma. Your odyssey can begin! But this time it’s not just a matter of reliving a memory in Animus, but of influencing the course of the whole story through your decisions and actions.

Right at the beginning of the story the first decisions can be made: On the one hand you can choose between the two protagonists Cassandra and Alexios, on the other hand the game offers the options to play either in guided or explorative mode. In Guided Mode, undiscovered locations and quest markers are automatically marked on the map, while in Recommended Exploration Mode, targets must first be found by exploring the area using clues. This will encourage you to explore the environment more intensively instead of just riding from A to B, and is also incredibly fun, as the game world of Assassin’s Creed: Odyssey looks really stunning. For example, the landscapes are far more varied than in the previous series, from white sandy beaches where small crabs wander, to sun-drenched deciduous forests where deer roam, to snow-capped peaks, everything you can imagine in terms of scenery.

Not only the atmospheric appearance, but also the numerous question marks, which are present in the game world and contain enemy camps, caves or even cities and fast travel points, entice you to spend hours exploring the big game world. Traditionally, you’ll also be equipped with an Eagle to help you explore the environment by marking enemies and treasures. 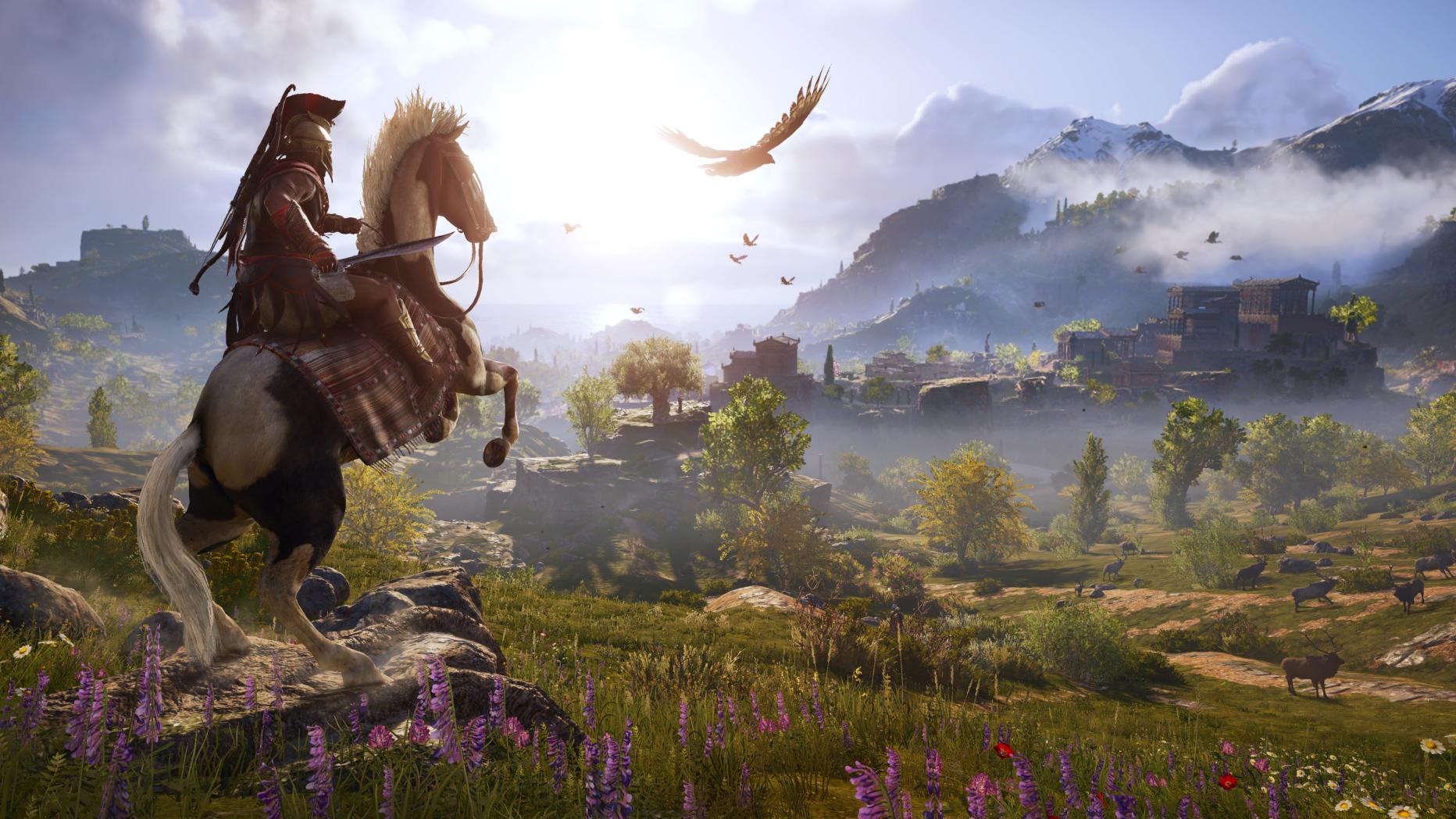 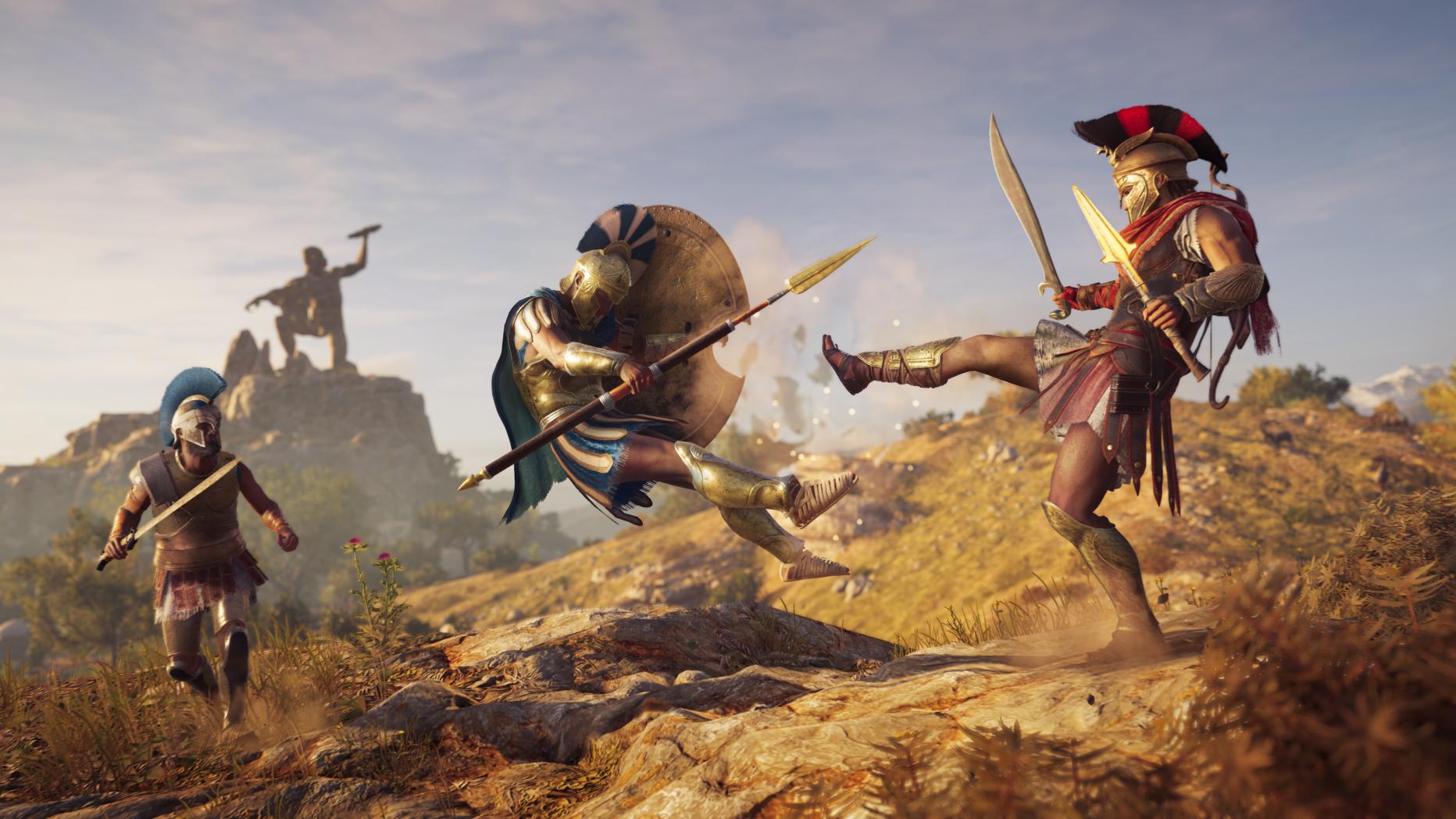 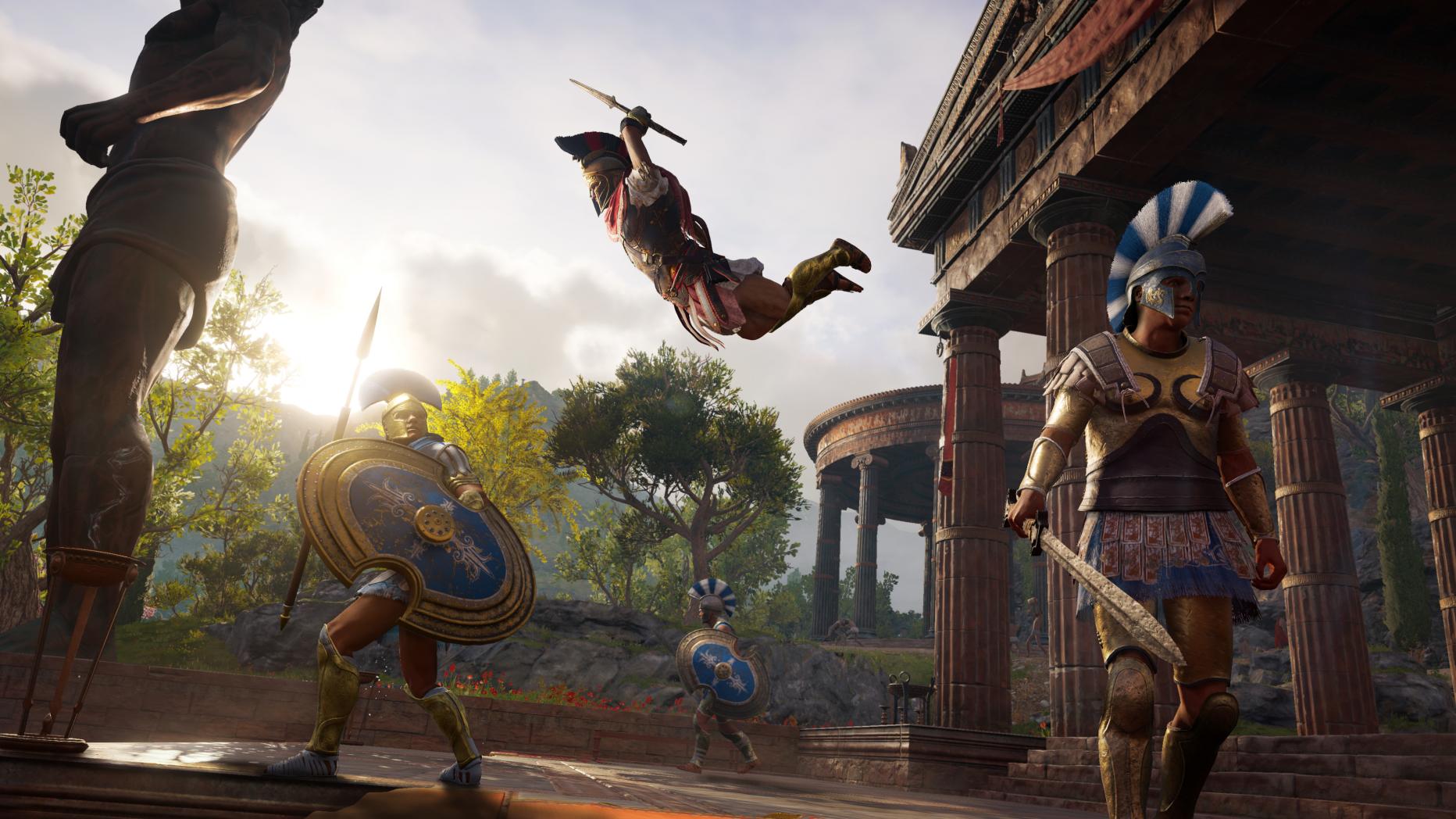 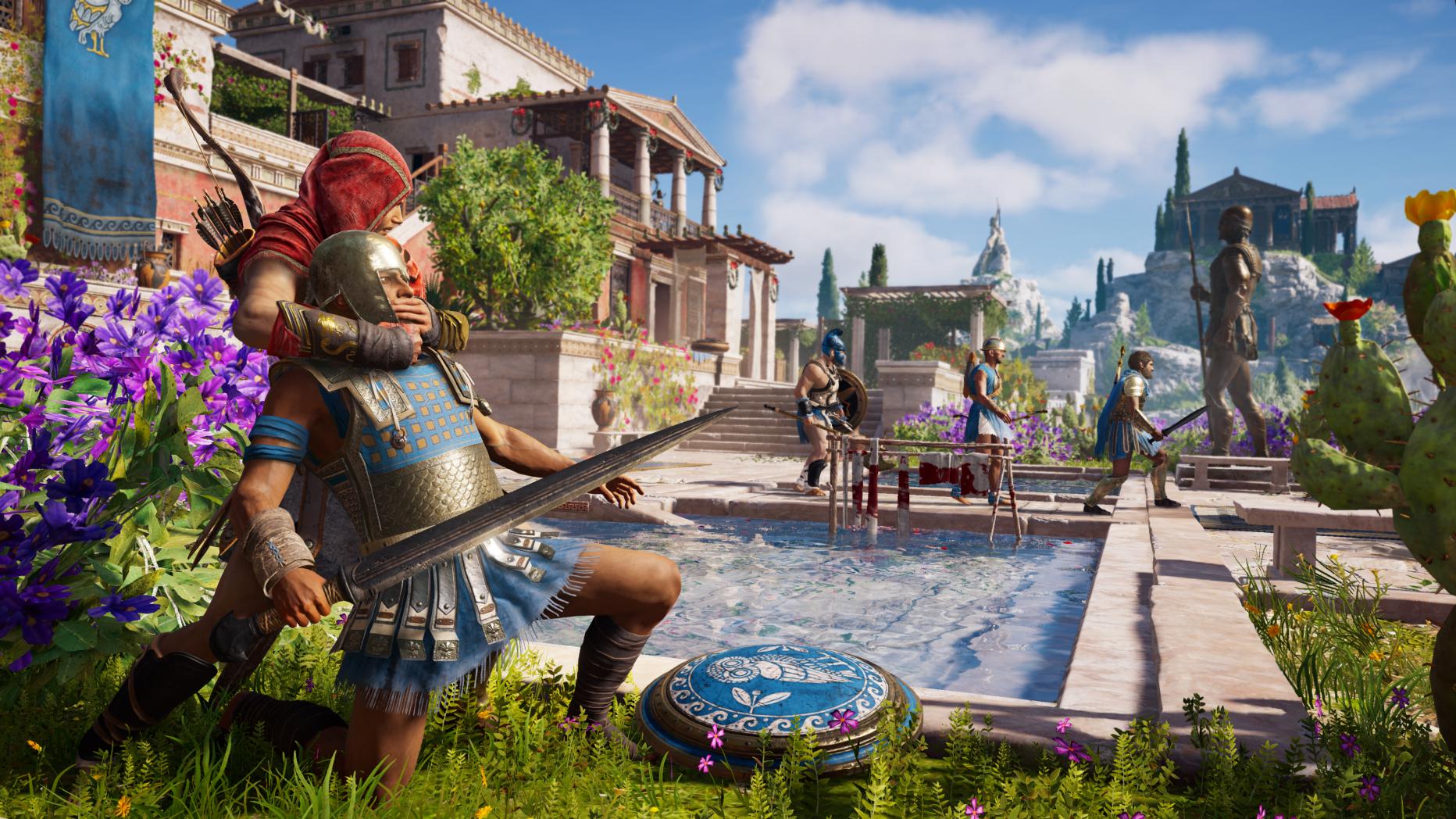 It is an old philosophical principle that every decision spreads like a wave and has consequences that cannot be guessed at. Assassin’s Creed: Odyssey has taken this old wisdom as its motto. You are confronted with decisions that are not easy to make and sometimes have serious consequences, even if it is “only” a side quest. Some tasks have enormous depth and present you with a moral dilemma or two – a welcome step further towards RPG for fans of The Witcher, The Elder Scrolls and Co. The evolution of the Assassin’s Creed series is continued by these new decision possibilities and the now given design freedom gives the game a high long-term motivation – because you want to know what would happen if you had decided otherwise at a certain point in time.

The quality of the side quests has been worked on, even though they still often demand similar tasks from you, such as killing bandits or procuring materials. Usually the whole thing is wrapped up in an exciting little story and equipped with lively dialogues, which actually motivates you to help the other person. Conversation options that have a strong influence on the course of the game are marked with a special symbol so that you can easily recognize them. It’s definitely worth saving your score before conversations or quests, which is finally possible in Assassin’s Creed: Odyssey. 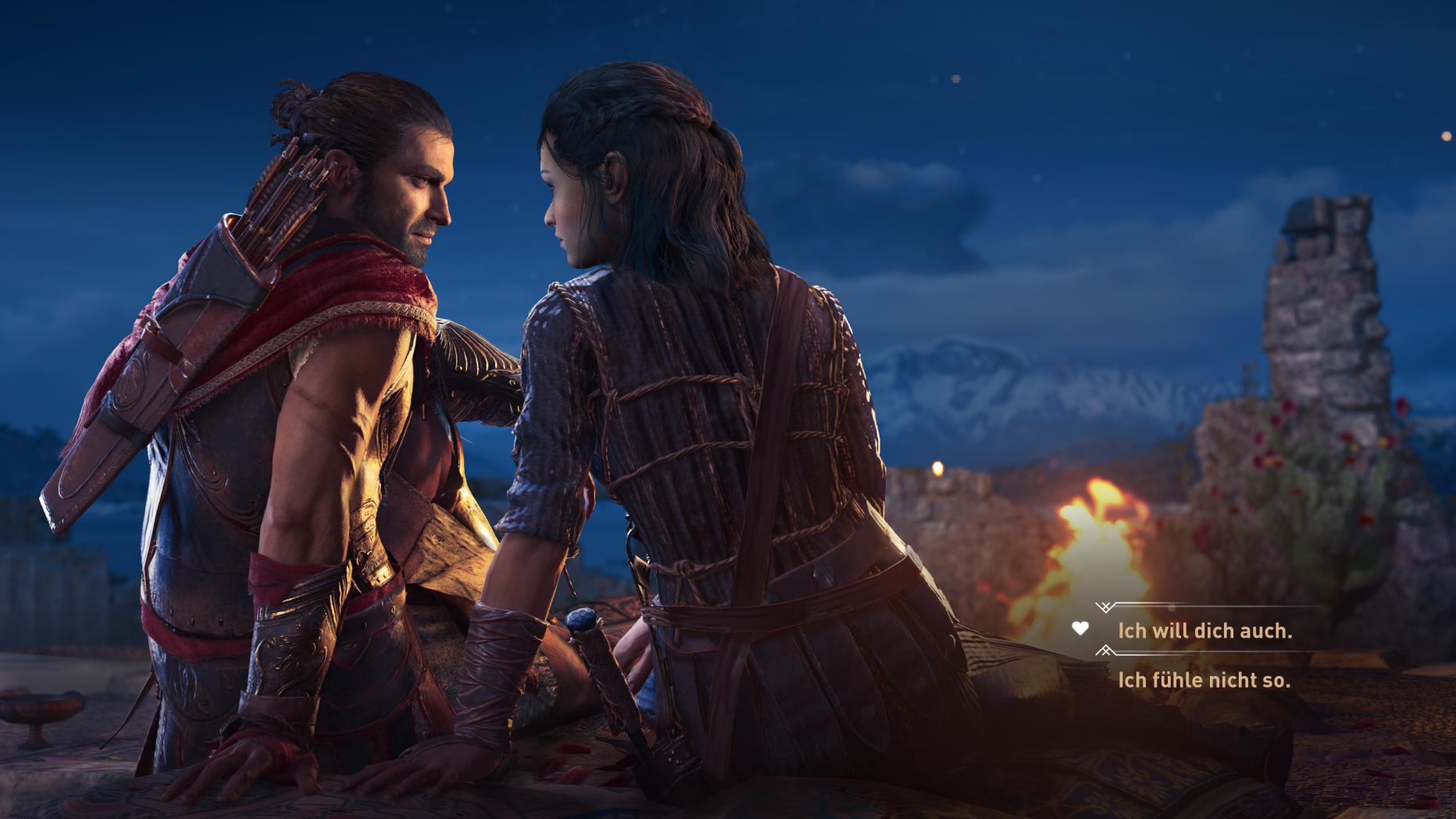 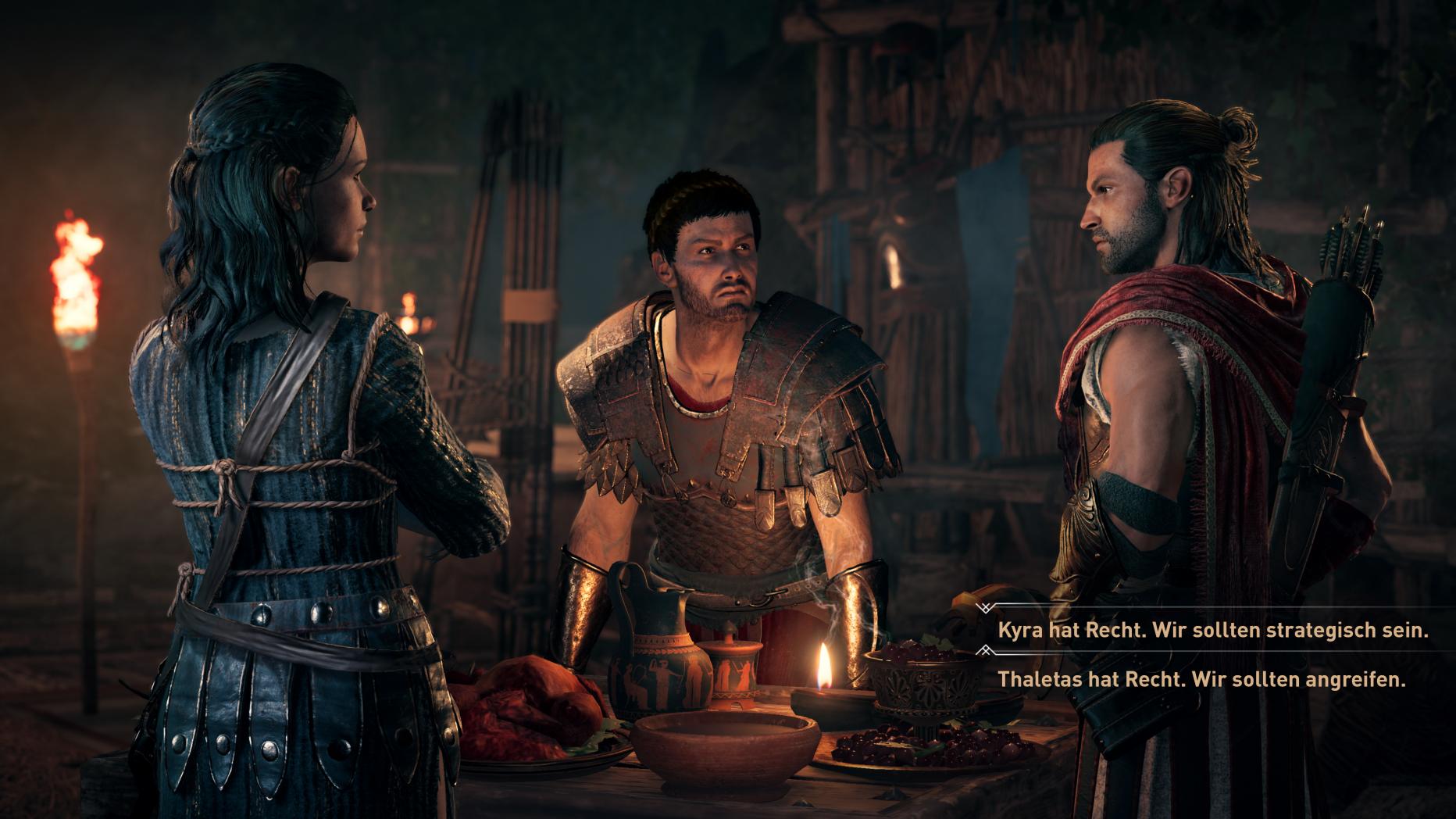 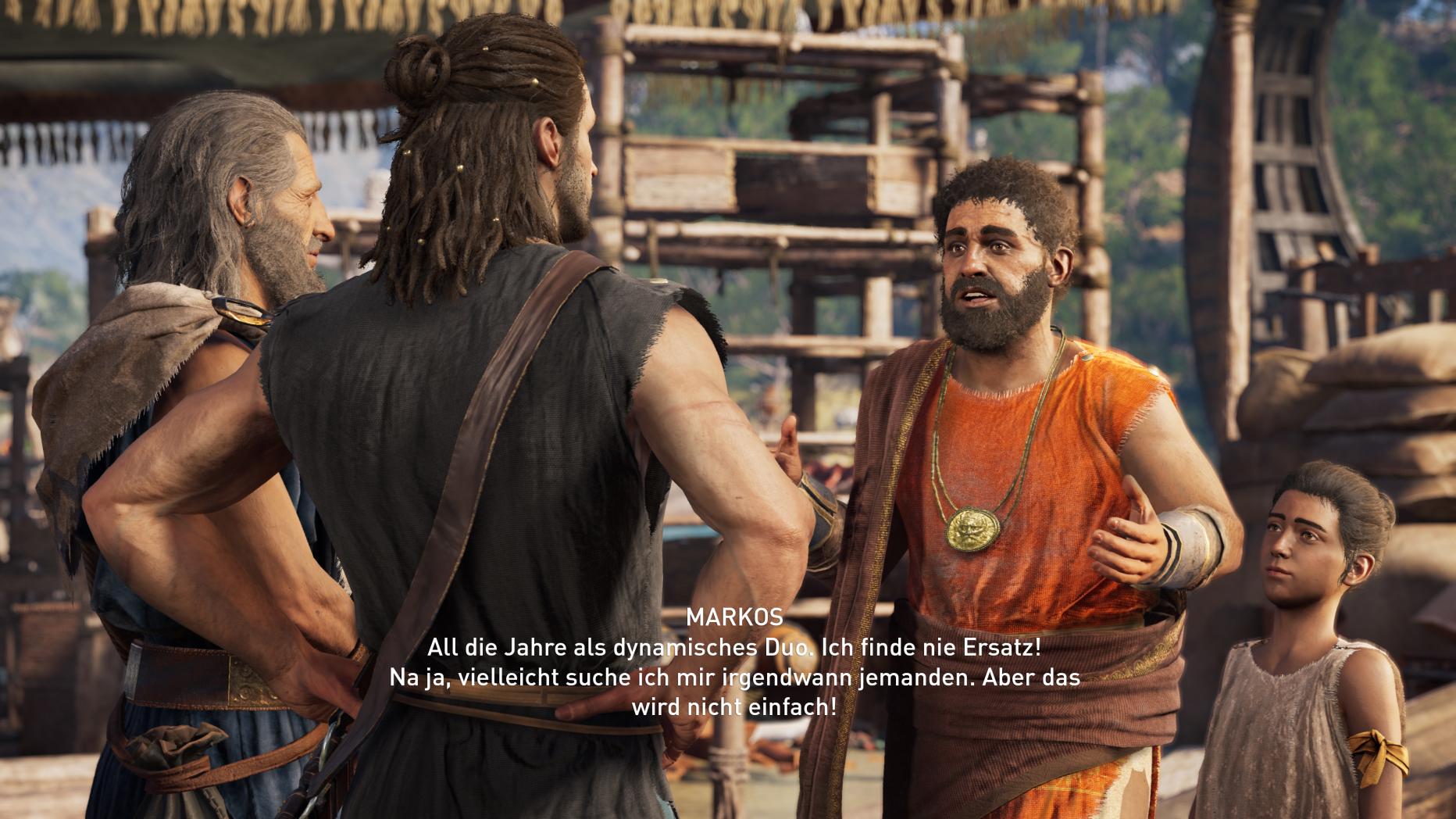 The combat system and the general control are based on the mechanics known from Assassin’s Creed: Origin and have been improved in detail. At the beginning you are only equipped with a single weapon slot, a second one is only unlocked by reaching a higher level. There are again heavy and light weapons, which can be used depending on the type of opponent. It is fun to search for different weapons and try them out, because they sometimes differ in the feel of the game and all have their advantages and disadvantages. In addition, you now also have the option to unlock special abilities for melee and ranged combat and equip them in an ability wheel – first four, later by unlocking a second wheel, eight skills – which do a lot of damage or are used for healing. These adrenaline-charged skills include the “Spartiate Kick” – a particularly powerful kick that can hurl the opponent meters away. But enemies also have the ability to use special attacks that cannot be parried or broken through. This is symbolized by the glowing silhouette of the enemies. The fights become more strategic and also more demanding in direct comparison to the predecessor.

As already known from Assassin’s Creed: Origins, the weapons have different perks and quality levels (rare to legendary) and can be adapted to the blacksmith’s own level in exchange for a good sum of raw materials and drachma or engraved with an engraving, giving them additional attributes. Different engravings are unlocked during the game and offer a variety of possibilities – from poison or fire damage to increasing the critical hit rate. The battles are varied and motivating due to the variety of weapons and detail improvements. Although the skill tree in Assassin’s Creed: Odyssey may seem a bit balder at first glance than in its predecessor, the different skills are well thought out and can be further developed in the course of the action depending on the preferred fighting style. 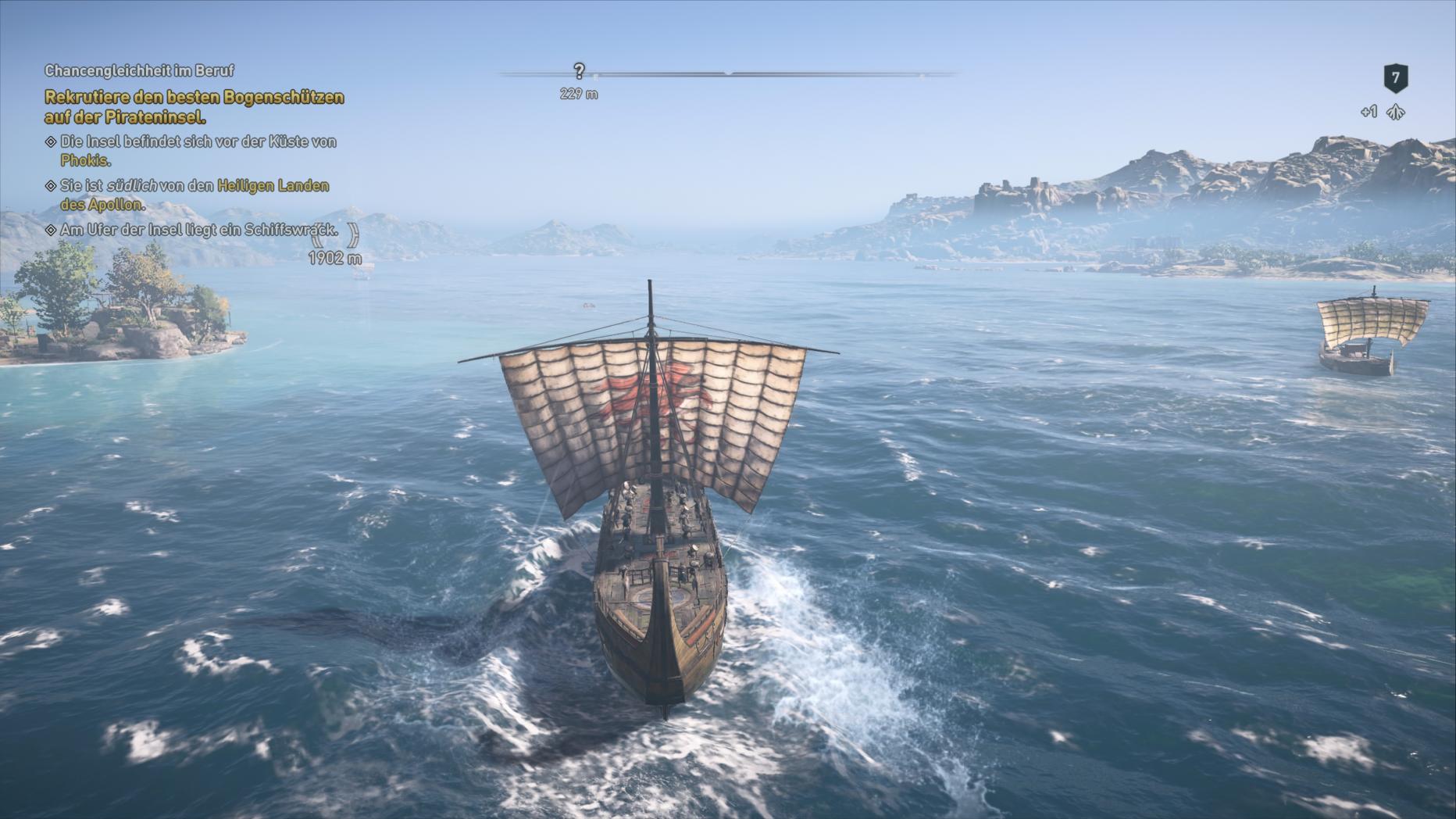 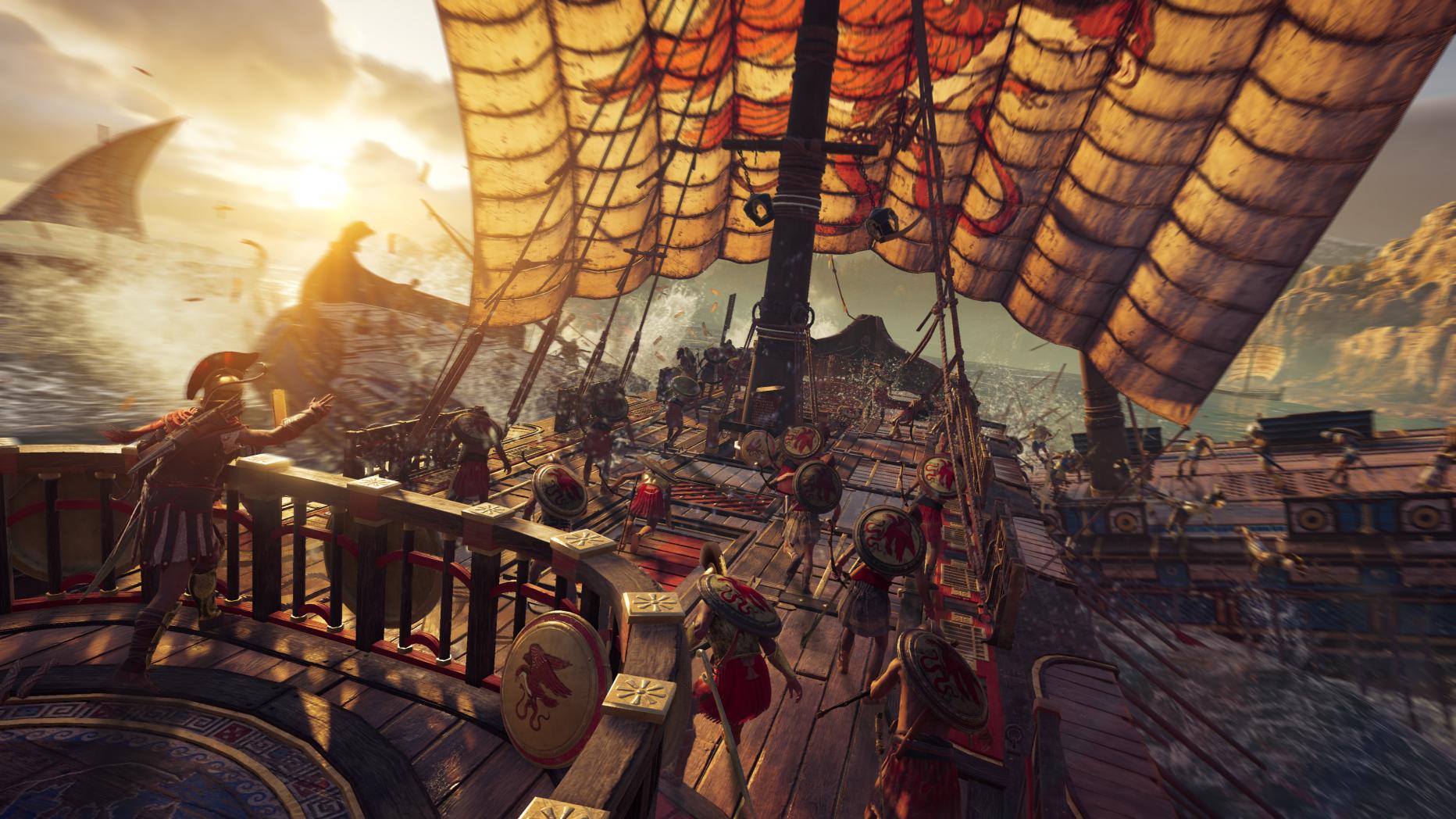 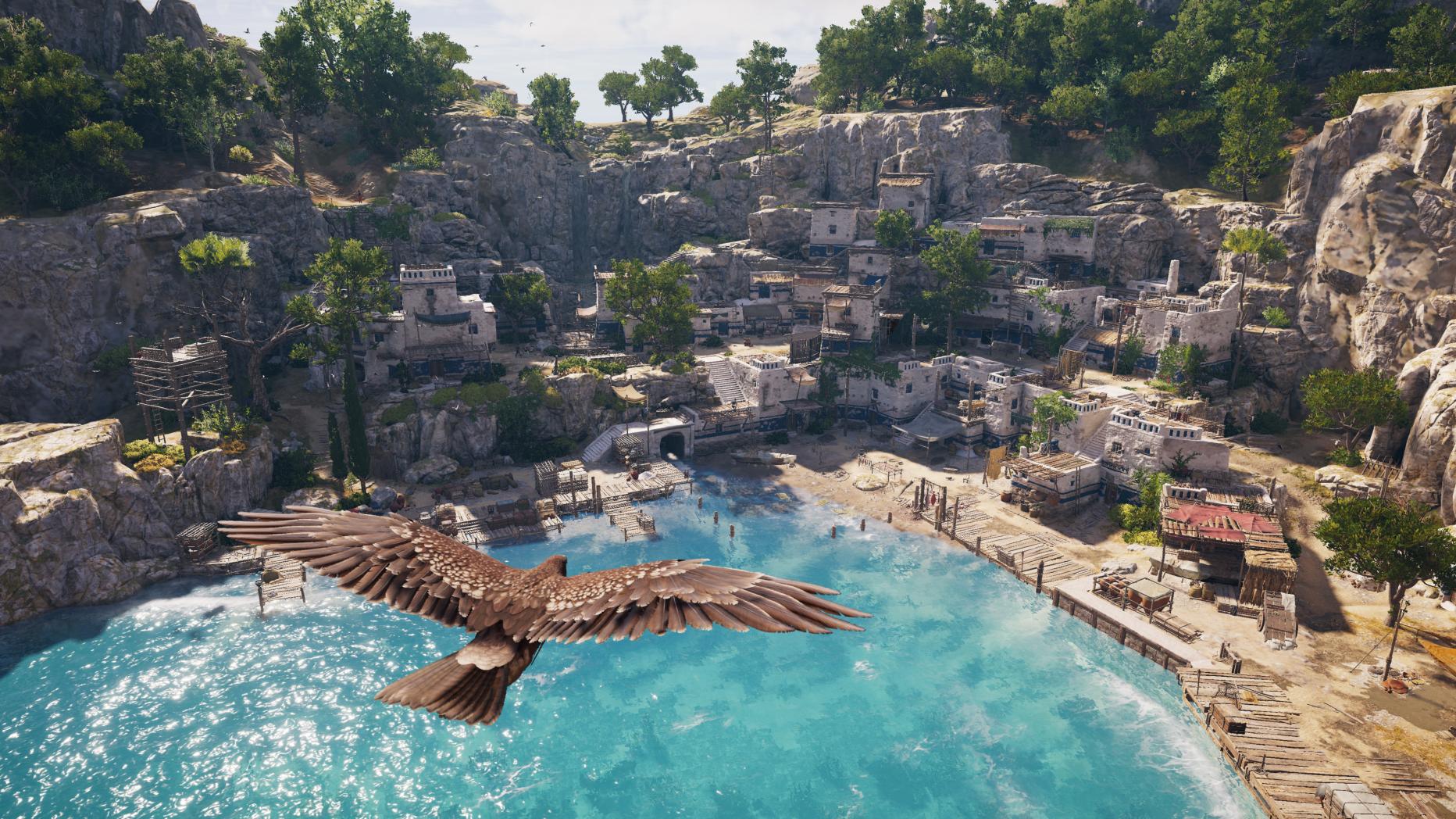 Variety is a must

In Assassin’s Creed: Odyssey there is a lot to discover and thanks to the very differently designed quests the game always remains captivating. Besides the exciting main story, which also takes some very unexpected turns in the course of the game, Odyssey can offer a number of different side activities. The “conquest battles” in the different regions of Greece, for example, deserve special mention. The battles between Sparta and Athens are staged here in an epic atmosphere, in which you can compete as an infantryman among masses of computer-controlled comrades-in-arms – and of course a large amount of experience points and treasures can be won.

But it’s not only possible to fight on land, sea battles are also on board again in the latest Assassin’s Creed. Since Greece has many islands, the area must of course also be opened up to water with a large ship , and this does not always happen peacefully as expected. Your own ship can be improved and individualized by using different resources that are found or captured in the game world. For example, you can upgrade the hull to increase its defense, improve the attack power of the bow and spear shooters, or add special attacks such as those caused by projectiles ignited in fire bowls. Certain NPCs can now also be hired to become part of the crew. Up to four of these special crew members may be hired, each with different bonus skills. The appearance of your own ship can also be changed by using different galleon figures or skins for crew and boat; the necessary items are distributed as loot in the game world. Personally, I wasn’t a big friend of the naval battles at first because of the predecessor Assassin’s Creed: Origins, but in Odyssey it was surprisingly fun to participate in the different battles or to board other ships.

The arena already known from the predecessor is also there again to slaughter to your heart’s content until it’s no longer possible. You can also go treasure hunting again, on small islands or shipwrecks, discovering the surroundings or solving puzzles that can be found anywhere in the game world. In Photo Mode, you can also document your journey through ancient Greece at any time – including numerous filters and settings.

What am I gonna wear?

In Odyssey you’re no longer limited to finding complete outfits, but can now also wear individual armor pieces, typical of role-playing: (Hideable) head armor, arm armor, upper and lower parts as well as the matching footwear. You can find a variety of weapons and armor items throughout the game that offer different bonuses and perks. Whether you want to be more defensive and skill armor reinforcements, for example, or use more offensive skills such as poison or fire to your advantage, you can further customize certain items by equipping them with specific perks and engraving them on the blacksmith. The variety of the outfits is large and optically varied – from Spartan field soldiers to the Slayer with face painting. This makes it always fun to find new items in the game. And of course you’ll also have a faithful four-legged companion who comes whenever you whistle – your horse. This time you can also buy a variety of skins for your mount, from the simple color change to the kitschy white unicorn including rainbow trace. A real money shop is also available, and you can purchase skins, weapons, armor, and experience boosters for cash. 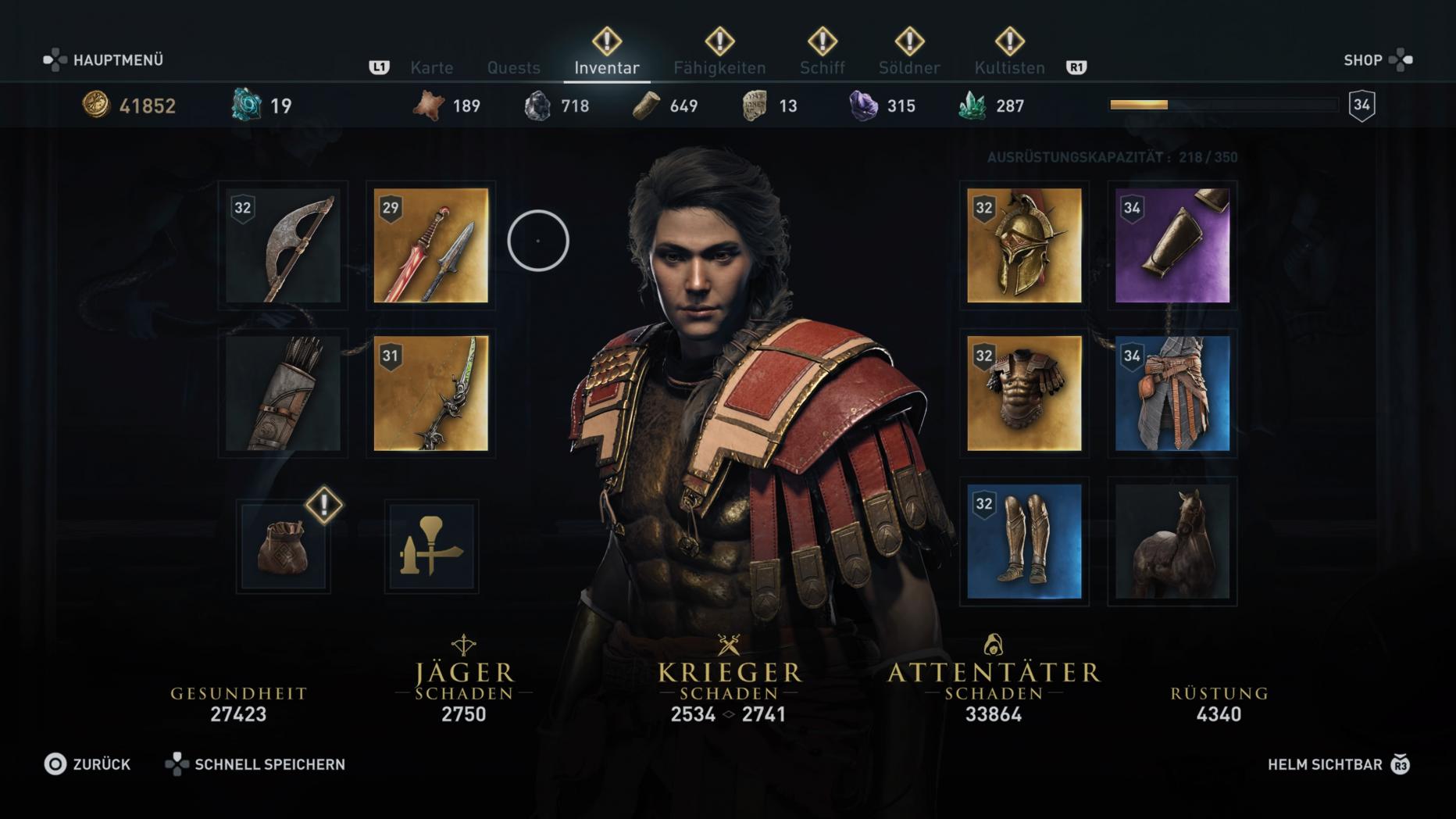 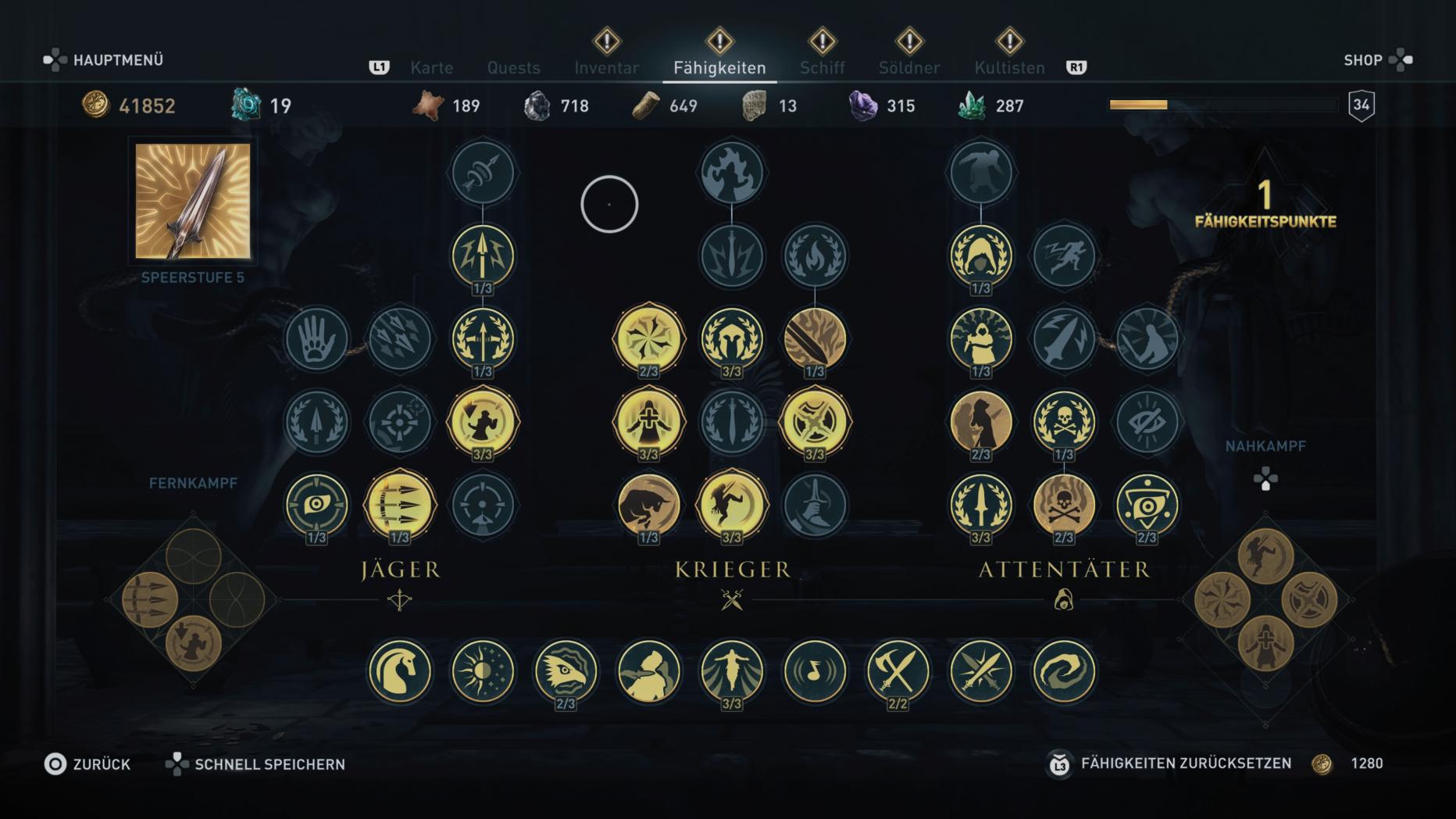 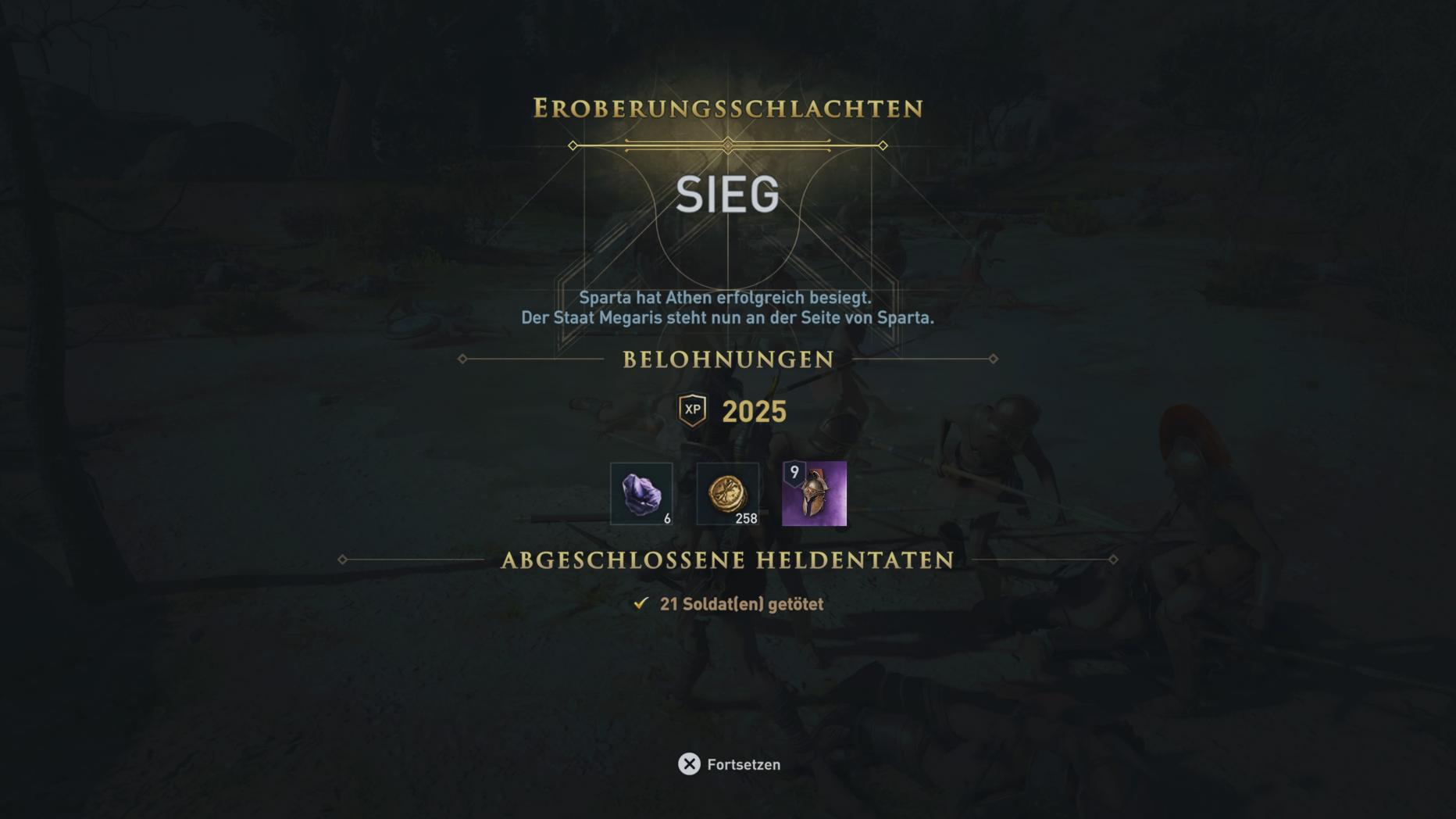 Away from the old history of revenge

The story of Assassin’s Creed: Odyssey is told in an exciting way and keeps you tied to the gamepad. Beautifully cinematically staged and topped by breathtaking animations, the game captures you from the very beginning. The facial expressions are harmonious – I personally am always very happy when a game manages to move the eyebrows to match the mood – and the soundtrack must also be praised here: The speakers were there with heart and soul. The main story is much more complex than it might seem at the beginning, and it quickly becomes clear, it’s about much more than just killing a Spartan army leader … In the course of the game there are some surprise moments, and also the storyline taking place in the Presence fits in well and is more extensive and interesting than in the predecessor.

One part that I particularly liked in Origins was exploring the Egyptian pyramids and finding the Isu’s audio recordings. But I was a bit disappointed that the whole thing wasn’t more prominent in the game. This changes in Assassin’s Creed: Odyssey, because ancient civilizations play a central role in your journey through Greece.

Another new story element that Odyssey now uses is humor. Again and again there were scenes in which I had to laugh, because a quest demanded a completely absurd act from me. The partly sarcastic discussions during the game, for example with the philosopher Socrates, make the events seem even more lively, and also the romance doesn’t come too short on Kassandras nor on Alexios Odyssey – again and again various characters are more than happy to meet you …

The definition of Odyssey is: “long way; journey connected with many obstacles, like an adventure” and this applies 100 percent to Assassin’s Creed: Odyssey. The fact that the series has moved far away from its origins was already known to many with the release of Assassin’s Creed: Origins. Personally, I welcome this progressive development towards role-playing. Odyssey is not only aimed at Assassin’s Creed veterans, but also at players who have not yet played any part of the series. Especially fans of titles like Horizon Zero Dawn, the Tomb Raider series or The Witcher 3 should definitely take a look at the Open World Game. This may sound a little kitschy now, but I’ve had a little hole in my heart since I finished The Witcher 3, but Assassin’s Creed: Odyssey actually manages to fill part of that hole. I think Odyssey has everything that makes a great game: an excitingly told complex story, humor, surprise elements, beautiful background music and good graphics and complex characters. In my opinion, Odyssey is the best part of the Assassin saga that has been released in recent years, in which countless hours of gameplay can be spent in a credible, living world. My expectations have been exceeded and I am more than excited to see where the series will take us in the future. 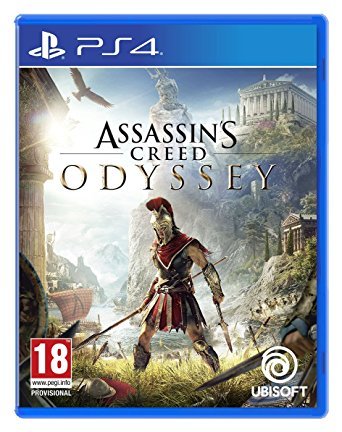